A look at Reggie Kimura’s life and autobiography 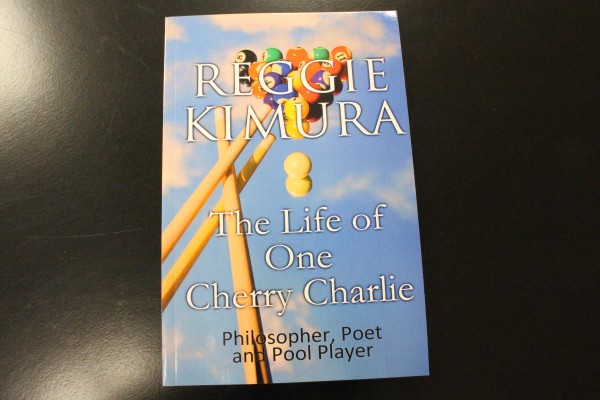 After living through the Japanese internment camps in British Columbia, Reggie Kimura made his living in Toronto playing pool. He was a pool hustler.

When speaking with Kimura, 87, listening to him reflect back on his life, it’s no wonder why he wrote an autobiography called, The Life of One Cherry Charlie: Philosopher, Poet and Pool Player, which was released Oct. 30, 2013.

During World War Two, Kimura’s family was forced to leave Vancouver. His mother and two younger siblings went to Hastings Park where they waited to be relocated east.

At Hastings Park, they considered him a man at the age of 13 and he was separated from his family.

His father, an Issei, worked at a pulp and paper company in Port Alice, on Vancouver Island. In 1942, he was taken to a prisoner of war camp in Petawawa, Ontario.

From Hastings Park, Kimura, his mother and younger siblings were forced to move into the former mining village and at the time, the current ghost town, Slocan.

Two years later, they were relocated to New Denver.

When looking back at New Denver, he remembered it as, “Such a beautiful place, our house was only 200 feet from the lake, so weather permitting I would rush out to the tiny dock we made and dive into the crystal clear water.”

At the age of 18, by law, all Japanese Canadians living in British Columbia had to leave, so he moved to Toronto. He stayed with his uncle Hank who lived in the east end of the city at Jones Avenue.

As the war was finally over, his father was released from the prisoner of war camp. They were reunited, found a small apartment and stayed together, working side by side at a restaurant for about a month. Then for the winter, they went to Kapuskasing, Ont. to work at a pulp and paper company as loggers.

“They were small trees, not like the trees in B.C., but it was tough work,” he said.

Kimura and his father were finally reunited with his mother and sibling’s during the spring of 1946 in Mount Forest, Ont.

His family eventually moved to Toronto, where he tried to study to become a chartered accountant, but he said, “That was too hard.”

Next, Kimura found his calling as a pool hustler.

He began playing pool in the basement of a restaurant at the intersection of St. George and Dupont.

His friend always wanted to play and at the time, although Kimura “wasn’t very good”, his friend was even worst.

So the two played the game snooker on the small pool table. Kimura played with a handicap so that the games would be a little bit fairer.

“Playing on a small table, I developed a touch to keep up with him. As he got better, I got better,” Kimura said.

His friend began wanting to play for big money, like $20 games, which was a lot of money back in those days.

After playing with his friend in the restaurant’s basement and eventually getting good, Kimura said that he was sick of taking his friends money. “I wanted to see how the big boys played downtown,” Kimura said.

He went to the pool hall, Cue, at Yonge and Bloor.

This is where he met John Johnson, a pool hustler, who showed him the ins and outs of a pool hustle and how to make a living by betting on games.

“On any given day, I think he was the best in the world,” he said.

One of the first lessons that he taught Kimura was, “not to clean anybody out.”

This means that when playing someone, you should only take half of their money, so that they’d keep on coming back for more.

He earned himself the nickname Cherry Charlie because he’d play snooker with only one red ball or “cherry”, instead of the normal 15. He did this so that the games would be quicker and therefore he could win as many games as possible, maximizing the day’s profit potential.

“I always had money, say Monday I’d go, make a few dollars. I’d spend some of it and I’d still have money, go back, make more money and it just keep going,” Kimura said.

He said that his pool hustling even funded trips to New York where him and one of his friends would go the Big Apple to hustle and go see Broadway theatre.

It wasn’t until he was 40 years old, when he had to stop playing pool when his thyroid illness got worst.

“You got tired right away, you’re weak, and you’re always shaking. So I quit.”

He said it wasn’t a sad moment when he had to stop playing because, he didn’t enjoy the game anymore.

After his Buddhist group went to Montreal, when he got back home in Toronto, he said that he still felt so happy and energetic. So decided to he write about it.

“I wasn’t even thinking about it, I wanted to write something about it and it came out as a poem,” Kimura said.

He was told that The International Poet Society was having a contest from a friend, so he said, “Why not, I have nothing to lose.”

He wrote and submitted this poem entitled Celebration:

Far as the eye can see

Only waves of clouds

Over the Castle of Peace

We salute with momentous joy

Dance of the ballerinas

Prelude to a rainbow with Sensei

All celebrating the Humanity of Life

He ended up winning and flew out to Washington where the International Poet Society was holding their annual conference.

Kimura said that he spent 10 years writing his autobiography.