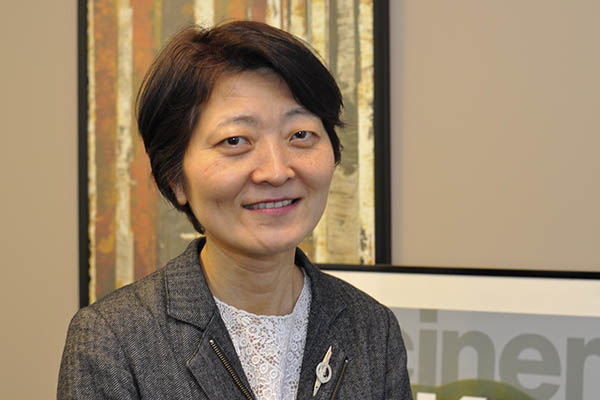 Emi Iwanaga has worked in both New York and Budapest for the Japan Foundation, and now brings her breadth of experience to Toronto. Photo by: Matthew O’Mara

Traveling recently to B.C. to attend the Japanese Language Proficiency Tests and taking part in more events than she can count in and around Toronto, Iwanaga is now finally able to find time to settle into her role and plan for the foundation’s future.

She was previously the executive director of the foundation’s Budapest location and brings a wealth of experience to Toronto, especially with her ability to work with local and international artists from a variety of backgrounds and disciplines.

Iwanaga is also the first female executive director to hold the position here in the city.

We caught up with her at the Japan Foundation’s offices for an interview.

Nikkei Voice: Tell us about your latest experiences at your posting in Budapest.

Emi Iwanaga: I was working there for five and a half years before coming to Toronto. The Japan Foundation has a policy of rotating its staff to different positions. If you join the foundation right after college and you work until you retire, they used to say that you get three overseas postings. You go out, you come back, you go out, and you come back.

NV: You’ve worked in New York and Budapest which have very different populations, how have those experiences informed your approach to things here in Toronto?

EI: You probably know about the mission of the Japan Foundation. We try to promote and enhance goodwill between countries of the world and Japan. Our approach is three pronged and it’s based on three pillars. One is supporting Japanese language education, the second is enhancing Japanese studies, and the third is to promote the understanding of Japanese culture through arts and culture. In New York, my position was based on education projects. In Budapest because I was the director there, I tried to make a good mix and good balance of those pillars.

Back to your question about how my experience in New York and Budapest work for me in Canada, that’s to be seen. When I left Hungary, I recognized there was a huge Hungarian presence in Canada already that’s because of 1956 and lots of immigration. In Canada, I look forward to the diversity of the community. I’ve learned there’s a real openness and willingness to help each other in Canada, so I really admire those values. I look forward to meeting the community and offering different projects that can bring people together.

NV: There’s been a great deal of change at The Japan Foundation in Toronto. You’ve moved to a whole new building and thus have a new space. What are some of the new initiatives you hope to bring to the organization?

EI: I was not here when the office moved physically from the Colonnade where they had the centre for twenty years. The lease came up, so we moved and now we’re at Yonge and Bloor, which is one of the busiest areas in downtown Toronto. I want to forge partnerships with cultural organizations outside of our office. I think that’s terribly important and beneficial for us both. For example, if there is an art museum we can work with that would be wonderful. We always work with universities and schools, so I’m very excited to be working with those entities. It’s not only Toronto or the GTA, but all of Canada.

NV: Do you hope to work with other Asian communities as well?

EI: I hope to do that in good time, yes.

NV: How have you acclimatized to the Canadian way of life so far?

EI: I have a Canadian Goose Jacket *laughs*. I think I came here at a good time. It was before the holiday season and everyone was very happy. People seemed to be anticipating many joyous occasions. The weather has been remarkably mild. I was expecting much more snow, but I’m learning that Toronto doesn’t have a lot of snowfall.

NV: When you were in Budapest, what were some of the strategies you used to engage the local population?

EI: I tried to make a good balance between the traditional and contemporary. In Budapest, there was a huge interest in traditional Japan. I find it interesting, personally, to find out why, for example, the technique of Noh, the traditional Japanese performing art, continues to be very important. It’s a huge traditional art and there was one young artist [Aoki Ryoko] who had trained in the art of Noh in university, but she not only stood in that field, but tried to break out of that mold by commissioning contemporary composers to work with her, so that she could use her technique to merge that with new sounds. Engaging local musicians onsite and bringing her along, and then working with composers was very interesting. That balance between the traditional and contemporary, and then sharing that is interesting to me and I’d be very happy to say that the audience in Budapest also came along.

NV: Do you hope to bring some artists from Japan and have them exhibit their talents here?

EI: That model has been done before and it’s a good model, but I hope to not have just one perspective, but straddle the old and new. We want to work with local artists and cultural entities.