Abuzz on the rooftop 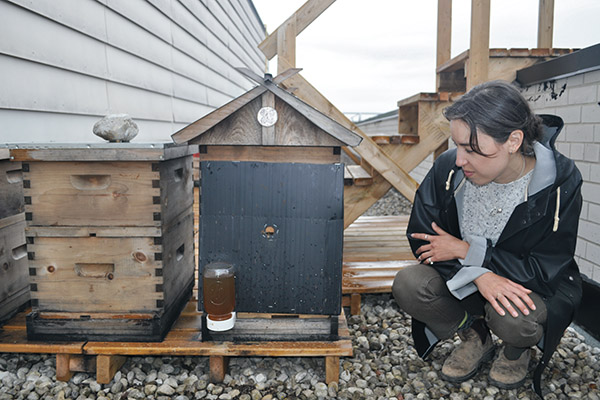 Yonsei embraces the philosophy of peace and harmony in beekeeping practices. Mariko Kawano with her rooftop apiary, Heiwa Honey, at the Japanese Canadian Cultural Centre in Toronto.

TORONTO — Mariko Kawano’s apiary, Heiwa Honey, is a project three generations in the making, and combines her Japanese heritage with her passion for beekeeping.

Heiwa means peace and harmony in Japanese and is the philosophy Kawano brings to her beekeeping.

While showing her apiary on the rooftop of the Japanese Canadian Cultural Centre, she pauses to help a bee stuck on its back. Gently, she guides the bee back to the opening of the hive, where it flies in and continues on its way. 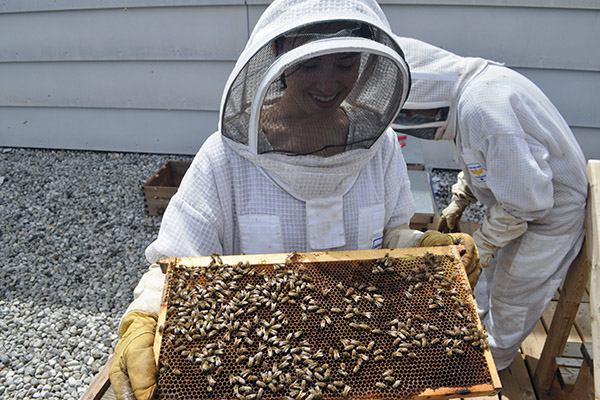 Mariko Kawano shows off a screen filled with active bees on her rooftop apiary in Toronto.

“Even just one bee, it’s a living, breathing thing that, to me, is still precious, but a lot of commercial beekeepers see it more as a commodity and are more based on the economical side of it,” Kawano tells Nikkei Voice in an interview.

Embracing peace and harmony in her beekeeping means creating an environment that echoes how the bees would behave in nature. While not certified organic, Kawano follows the practices of natural organic beekeeping. This means she does not use antibiotics or pesticides in the hive as it affects the natural immune systems and health of the bees, as well as the flavour of the honey.

Instead Kawano uses pest treatments with naturally occurring acids from the hive to deal with pests like mites that cling onto and feed off of the bees. As a result, Kawano’s honey bursts with flavours that vary depending on the location of the hive and the flowers that are in season.

“People say it tastes just like flowers, like spring,” she says. “You can really smell that depth and you can taste it, and it’s not there when you get honey from the grocery store.”

Spreading my love of bees and the importance of #pollinatorplants, yesterday with @shoreshto. Together, we can all make a difference for the future of pollinators. #beecause #loveofbees #belafarm #beeadvocators #honeyfest

Kawano is a third generation beekeeper, but she discovered her grandfather was a hobbyist beekeeper years after he passed away and she already started beekeeping. Kawano began beekeeping with her mother in 2013, who started in 2009, the worst year in recorded history for bee losses. Before, beekeepers often expected to lose 10 per cent of their bees each year due to age and winter weather. That year beekeepers reported an average loss of 55 per cent, a staggering trend that has continued since then. A variety of factors have led to these bee deaths, most notably climate change and pesticides. Kawano’s mother was inspired to do something, and began her own apiary.

The family’s original apiary was on an organic garden plot in Newcastle, Ont. Bees can travel up to five kilometres from their hive, and their garden plot was surrounded by commercial corn and soy farms which are often heavily genetically modified and also only flower once a season, explains Kawano.

“My concern was that no matter how well my beekeeping practices were and how well our farm was that I couldn’t control where they were going,” says Kawano.

While rural areas may seem ideal, urban centres like Toronto are great for beekeeping, says Kawano. Pesticides are banned in Toronto and Lake Ontario creates a “lake effect,” making the climate a bit warmer in the winter and cooler in the summer. As well, people grow all kinds of plants in their city gardens, which bloom throughout the season. 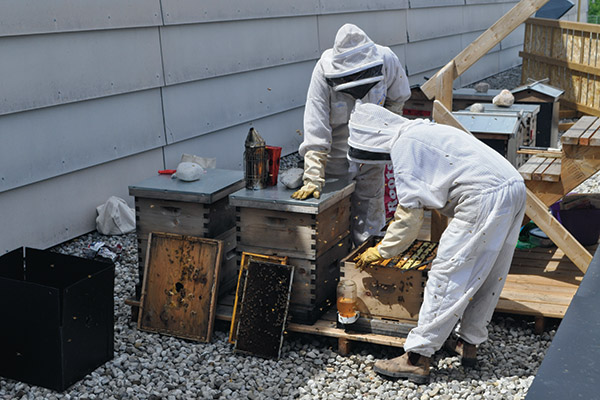 Mariko in her beekeeper suit, working on her rooftop apiary with her mom, Maryanne Cain, looking for the queen bee.

The JCCC turned out to be a prime spot for beekeeping, surrounded by green spaces like the Don Mills Trail, Edwards Gardens and Serena Gundy Park, not to mention the sakura that bloom right at centre, the bees have lots of options to collect pollen. When the apiary opened in October 2018, there were some concerns about have bees on the roof of the JCCC. But with good beekeeping practices, the bees keep to themselves, says Kawano.

Kawano keeps Buckfast bees, a gentle breed from Ontario and mated on Georgina Island, ensuring they are purebred. As well, bees only sting out of a last resort, because when they sting, they die. Kawano hopes her rooftop apiary can educate people on the importance of bees, to agriculture, food production and the environment.

“I really enjoy educating people about bees. The significance of bees and how close humans and bees have been for many of hundreds of years, just with the growth of agriculture,” she says.

While Kawano’s beekeeping time never overlapped with her grandfather’s, her approach has been a tribute to her grandfather, Kaichi Kawano and his influence on her and her family. Kaichi grew up on a strawberry farm in Abbotsford, B.C. where he tried out different hobbies, like woodworking, taxidermy and beekeeping. He built the family’s farmhouse there when he was around 16 years old.

“He was a very hands-on kind of man and felt like as long as he had instructions he could do anything  he put his mind to and he always had that attitude,” says Kawano. 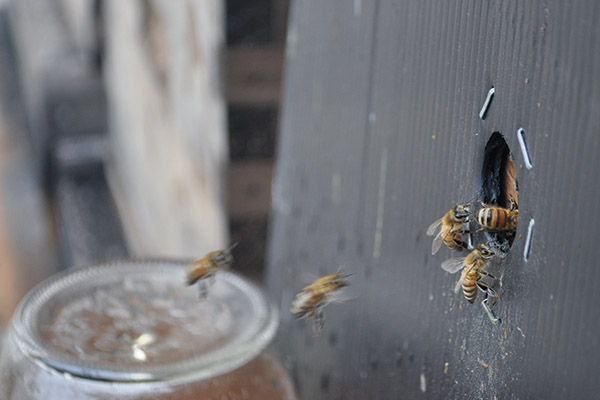 A closeup of the honey bees coming in and out of the hive, in Kawano’s apiary on the JCCC rooftop.

After the family lost their farm during the Second World War, Kaichi moved to a farm in St. Catharines, where Kawano’s father was born, and then to Scarborough. His whole backyard was always a garden, says Kawano. When Kaichi retired, he moved to Prince Edward County, where he had a hobby farm.

“He always just had this appreciation of being close and one with nature. I always felt like I kind of got that from him,” says Kawano.

Kawano’s rooftop apiary is a tribute to her grandfather. Kawano built the hives herself, and her father built temple inspired lids, as well as a cedar path leading to the apiary across the roof, skills he learned from Kaichi. Kawano’s mother, who sparked her interest in beekeeping, spent a lot of time with Kaichi, and was deeply influenced by his spirit. This winter was tough for Kawano’s apiary, of her 12 hives, she lost 11. Despite this, Kawano’s not going to give up. Her one surviving hive is going strong. When she opened it for the first time this season, she found a healthy queen bee, fresh honey and new larvae, all signs of a thriving hive, despite the harsh and fluctuating climate last winter.

“A lot of our family came from [Kaichi’s] spirit and that determination and that philosophy to be kind to the world around you, and life will go on and that determination. I kind of saw that this morning when I went out to see the bees. I was worried that they didn’t survive and seeing that resilience and sense of life, I always thought of that in my grandfather, Kaichi Kawano, it was something that I feel he passed down to my father and my family, as well as myself,” she says. “I didn’t learn it from him, but at the same time, I’m following some of his footsteps.”