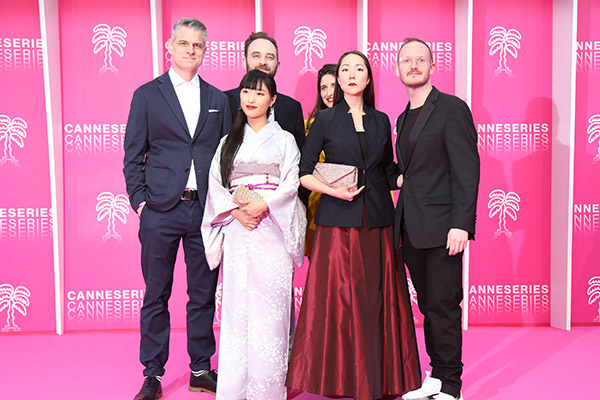 TORONTO — Japanese Canadian actress Miho Suzuki found herself on the red carpet at the internationally-renowned Canneseries festival in Cannes, France, for the premiere of her first major film role on Apr. 10.

Suzuki stars as the villain, Sadako, in the new digital series, Warigami, produced by Toronto’s First Love Films and the CBC, created by Eddie Kim and directed by Jason Lapeyre.

Watching herself on the big screen, and her show premiering at a major film international film festival with thousands of spectators was a dreamlike experience, says Suzuki.

“I was so grateful, but at the same time I was a little panicked, to tell the truth,” Suzuki laughs and tells Nikkei Voice in an interview. “I couldn’t just relax and watch. It was overwhelming.”

Warigami was nominated for the Canneseries Short Form award, recognizing excellence in “new, promising and innovative formats, which reflect current and new ways of watching series.”

Spain’s contender, Perfect Life, ended up taking home the top prize, but the experience itself was rewarding for Suzuki. Seeing the calibre of her competitors was a reminder of the level Warigami was being considered, she says.

This show is Suzuki’s biggest role to date, playing the role of lead villain, Sadako. The show follows Wendy Ohata (Japanese Canadian Emily Piggford) who discovers she is the descendant of ancient kami-jin warriors. Kami-jin warriors come from an ancient Japanese family line who can use paper (kami) as weapons. Ohata also discovers she is being pursued by an angry and deadly kami-jin named Sadako, who is played by Suzuki. 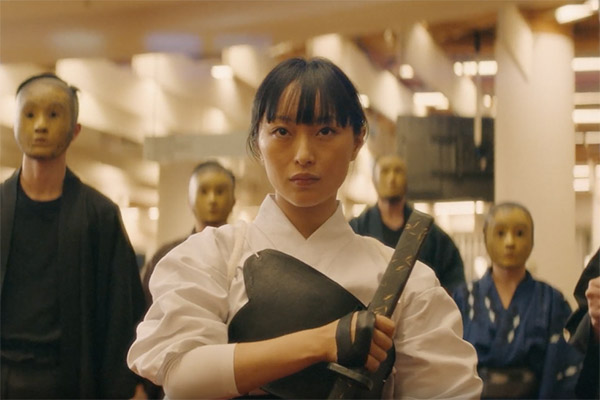 What follows is a thrilling, bloody and inventive action/comedy show. The show explores a new format unlike a regular television series. It is web series on CBC Gem’s online streaming platform and the 10 episodes are only six to 12 minutes long.

Suzuki’s character Sadako is filled with a quiet rage. She is a woman with a dark past, that lead her down dangerous paths and into the company of some shady characters.

“Sadako is behaving like this because of her past, her horrible past,” explains Suzuki. “She hurts a lot, she doesn’t like herself. She needed help, but who helped her were bad people.”

Script writer Andrew Allen gave Suzuki a playlist of death metal songs to help her tap into the rage she needed for the role. To prepare for the role, Suzuki and her costar, Piggford, trained with stunt choreographer Tommy Chang, where they practiced taekwondo, karate and laido. Suzuki, who has been dancing since she was eight, says her training in jazz, modern dance and ballet helped her quickly pick up on the fighting choreography.

The story takes place in North America, but has Japanese themes, cultures and inspirations in its story. Director Lapeyre lived in Japan for over a year, and fell in love with the culture, says Suzuki. He wanted the show to look and feel as authentic as possible, and sometimes consulted with Suzuki, to make sure elements of the story were true to the culture.

Suzuki, who is originally from Tokyo, has worked as an actress in Japan and Canada. While working as an actress in Japan, she worked on three separate Canadian productions and was amazed by the filming process. She was impressed with the time, care and passion Canadian filmmakers would take to make sure they captured the best scenes. This made her decide to embark on an acting career in Canada, she says.

Suzuki moved to Canada permanently last May and began filming Warigami in Toronto that October. Since coming to Canada, Suzuki says she feels more Japanese and wants to learn and connect more to her own culture.

“After I came to Canada, I felt like I am more Japanese. When you’re in Japan, living there all the time, you don’t care so much about Japanese culture,” she says.“But after you left, you feel, ‘I’m in the world and I’m Japanese.’ I want to [share] Japanese culture with the world.” 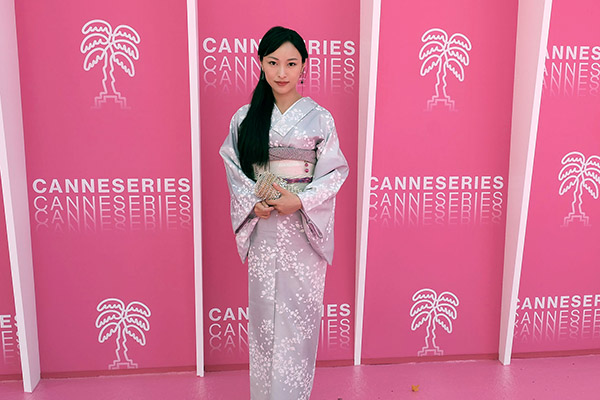 Miho Suzuki took kimono classes and learned how to dress herself in this kimono for the red carpet and photoshoots at the Canneseries Festival on April 10. (Photo by Olivier Vigerie / Canneseries 2019)

When Suzuki walked the red carpet and took part in photo shoots at the Canneseries festival in April, she decided to wear a beautiful, ornate kimono. While preparing for the festival, she couldn’t find anyone in Cannes who could help dress her in the kimono. So instead, Suzuki decided to take kimono classes in Toronto, something she never would have done while in Japan. As a result, she was able to dress herself in her kimono, and people, even strangers who had not seen her show, would come up to her in awe and admire the kimono.

Warigami has also been picked up by American TV network the CW, with talks of re-editing the short-form show and turning it into a TV movie. Suzuki hopes people will give Warigami  a try. The story is about hope and overcoming hardships, and it is also just bloody, good fun.

Warigami, starring Miho Suzuki, is set to premier on CBC Gem and the CW later this year.

For more on Miho find her on Instagram @mihyonvision and watch the trailer for Warigami below:


[…] Kamino is an actress, teacher, writer, and director who has performed in theatres across Canada for over 40 years, including the National Arts Centre and a season at the Shaw Festival. Her television and film career includes over 100 guest and lead performances, including the TV series Carter, filmed in North Bay alongside the late Denis Akiyama and the CBC Gem webseries, Warigami. […]