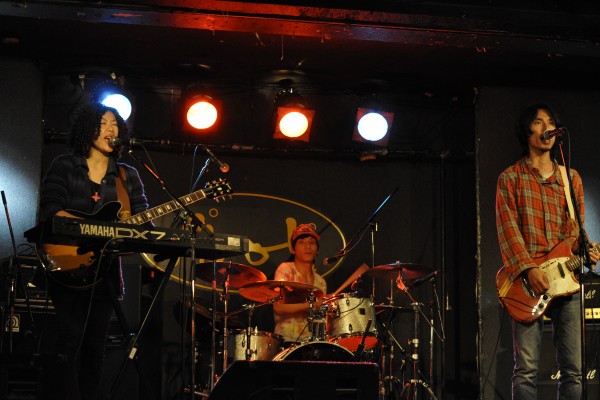 Nayuta performed at The Rivoli in Toronto on May 16. It was their first time in Toronto. Photo: Yuhi Kimura

During NMFT, the band seemed to enjoy performing with smiles all around and a lot of energy, which is the general personality of Kansai people and it helps them attract many people.

The band is also celebrating the release of their latest album and it was great to hear their new music performed on stage. I had a chance to interview them after their concert and it was a pretty long one, so please take a look.

Takeshi Kato: Tell me a little about Nayuta?

Shoko Awaji: I was born in Toyonaka of Osaka, and grew up in Ibaraki and Mino.

Miyamoto: I was born Itami, Hyōgo prefecture, but grew up in Takarazuka. Even though I barely remember my time in Itami, I met the artist there who did our album cover. We met at an Izakaya by chance and got to know each other.

TK: I was born in Sakurai hospital in Nara.

Yamada: I was born in Takatsuki hospital in Osaka.

Awaji: Is it time for me to introduce the hospital where I was born?

Yamada: I have many roots growing up. First of all, I moved to Suzurandai, Kobe and then Katsushika, Toyko, Hong Kong, Singapore, and came back to Toyonaka during junior high school and high school, but afterwards I went to Takarazuka and Mino. Although I cannot speak much English, I really enjoy taking the time to have unexpected conversations like just grabbing people abroad and talking to them, or having a conversation with a taxi driver.

TK: How did Nayuta form?

Miyamoto: The foundation of Nayuta was laid 10 years ago, and since then we’ve found three guitars and drums and we play a loud sound like metal. When our drummer left the band, we recruited a new member on website and Kouhei here sent message to us and became a member.

TK: What did you write to get them to take notice of you?

Yamada: I remember only a little bit. It was something lyrical like, “I’m in front of my computer and am already shaking just listening to your music.”

Yamada: I felt bored with my university life and even though I was planning to make a band with my friends, I didn’t do it. What I was looking for was the ability to create great music at my own pace, so that’s how the idea playing for “nayuta” began to take form. Besides, I could knew they were recruiting a new drummer and thought that want to play such great music and it looks interesting. Actually, I was beginner of drums at that time.

Miyamoto: I thought he was crazy in those days.

Yamada: I wrote my application pretty seriously, though.

Miyamoto: Although I could recognize he was serious, I thought he was just completely wired. Him joining us as a member of nayuta was decided after we played session together in studio eventually.

Awaji: I have been a part of nayuta for a long time. When one the other members left the band, I joined it. Actually, I didn’t want to join the band because they seemed so serious and eager to make great songs. It was a little intimidating. As well, they were strange compared to other bands as they’re a bit yankee. 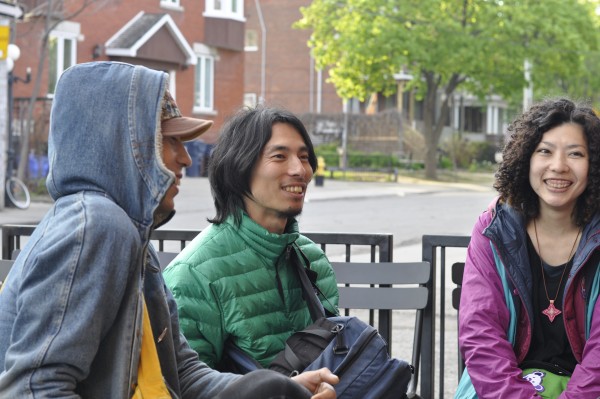 Yamada, left, Miyamoto, centre, and Awaji, right, during our interview and on the day after their first performance in Toronto. Photo: Takeshi Kato

TK: How has Nayuta’s sound changed over time?

Awaji: It has changed a lot.

Miyamoto: We like metal very much, but we also like other musical genres like rock, pop, and so on. We want to play music that’s unique and combines the best music we know. Our songs at first involved the music styles of bands like Led Zeppelin and ambient music. Slowly is became even more rock and involved improvisation depending on our preferences and mental condition in those days. Eventually our music style involved everything and crashed. The new Nayuta’s music is kind of punk and finally it’s getting closer to being “music”. Now, everyone is getting to play freely and take from their musical roots.

TK: My impression has always been Nayuta as an alternative as long as I have listened your songs.

Miyamoto: I think “alternative” is a good way of saying we’re doing new things. It made me rethink music’s influence on me, and how other music can offer new perspectives. The freer members of the band are, the much better the songs. I just said an interview-ish thing didn’t I?

TK: How was last night’s concert? Are there some difference from audiences in Japan?

Everyone: It was awesome. Thank you very much!

Awaji: Their response was completely different from Japanese. I was surprised very much. Everyone is kind. I feel like Canadian have a “love” of music.

Yamada: Of course, as everyone is different, so responses are different, but the atmosphere and enthusiasm is also totally different. After the performance, I felt like music can transcend even language.

Miyamoto: Audiences seem to pay respect to us. It is like we make a lot of effort to make supreme stage performance and then as audience come to see our performance. They get our pitch and follow us.

TK: What do you want to do differently in your other performances?

Everyone: We will definitely play even better and freer, and want to have high spirits and smile. Anyway, we will perform even better than our best performance.

TK: Has this experience in Canada changed your band?

Everyone: Definitely, deep in our hearts.

Miyamoto: I have realized again the importance of nationalities. Everyone is able to understand and enjoy music no matter the language.

TK: How was Niagara Falls? This winter is the coldest in 25 years.

Kouhei Yamada: It was really dynamic.

Shoutaro Miyamoto: It was fantastic and I felt that couldn’t realize just how big Niagara Falls is. When I participated in tour of being able to go near by the falls, but the tour ship was bucking. I understood we cannot go further. Besides, the view from top of tower made me surprised that for crazy amount and velocity of the water. I would absolutely die in there.

TK: I reckon even many nationalities language student is coming to see your performance in Toronto. What do you want to tell to them?

Yamada: Surprisingly, there are many kinds of nationalities people in Toronto. For instance, when I took a taxi, I asked, “ How come you moved into Toronto?” to driver who is from Yugoslavia. He said that caring about religion is pain in the neck over there; however, Toronto is very simple and it is easy to live. I reckon as everyone has own reasons like the clothing we choose to wear and so on. I wish everyone to listen to our music with open minds and our minds will open too.

Miyamoto: Eventually, important things are in outside your own home. Even though some bands have negative thought with their songs, they make an effort to perform. I’m learning a lot from those kinds of things, which is why I would rather look forward in our performances.

Yamada: Yesterday’s live performance is exact thing I said. We don’t usually make it that loud though.

Awaji: I realized that we are able to relish the little things and there are chances to do so everywhere. 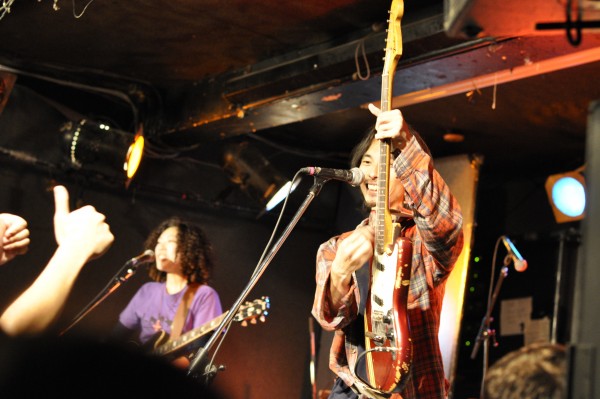 TK: What is your plan after you go back to Japan?

Yamada: We have other live events as soon as we finish NMFT, and we are going to perform around eight times in June in the Kansai region.

TK: What is the impression of the bands who performed with you at this event?

Yamada: Jizue seemed more musical than being a traditional rock band. If I have to choose whether they are band or a group of musicians, I would choose musicians definitely. Happy!Mari seems like a Tokyo man’s band. I know of Kinoko Teikoku. Although they have very melancholic music, everyone is very kind. I know about Uchu Conbini as well and Daijiro who plays guitar in Uchu Conbini. He actually graduated from same university as me. He is really funny and pervert. Emi is seriously cute.

TK: Where did you go in Toronto for sightseeing?

TK: It is Kensington market isn’t it?

Miyamoto: Yes! I knew that!

TK: What the band do you like? Who makes up your musical influences?

Yamada: I need to tidy up my library, to be honest.

Miyamoto: It is The Beatles for me.

Awaji: The Beatles as well. When I was child and couldn’t understand English absolutely, but I have listened to it from records that my mother bought. Those songs were really impressive that is why I realized many songs are from The Beatles later on.

Yamada: After thinking about it, I’d say a major influence on me is Thee Michelle Gun Elephant.

Miyamoto: It was almost same! I shouldn’t say right?

TK: Please say a few words for the young readers out there.

Awaji: The later half of your 20’s become interesting. No surrender!

Yamada: If I say to the older me, make good decision now. 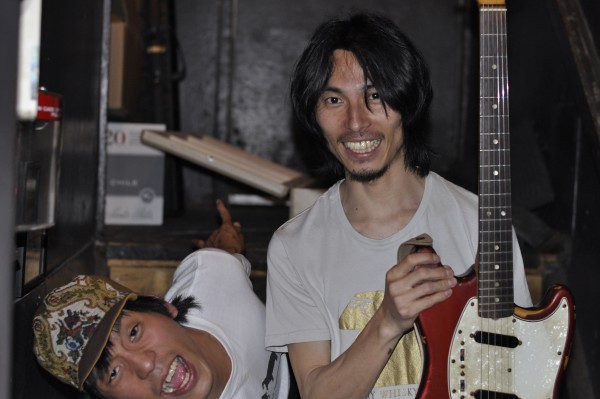 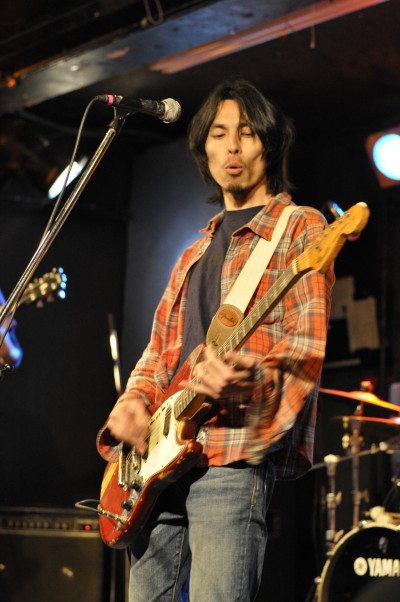 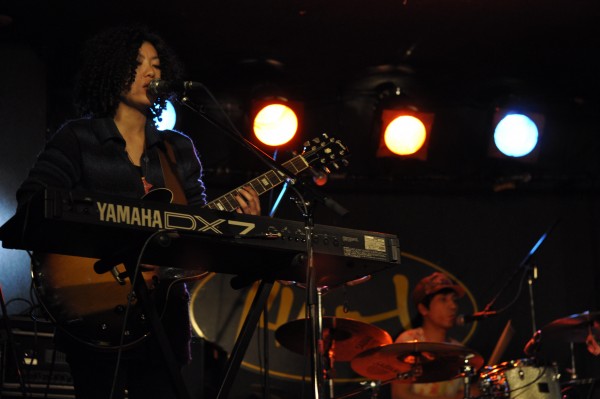 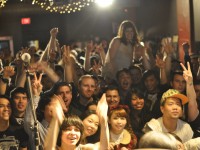