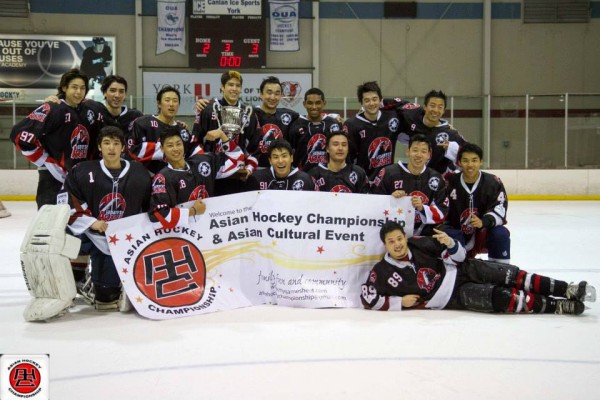 It is the second year in a row that the team of Japanese and Japanese Canadian youngsters have won an AHC title, but this year was particularly sweet since they won in the top level division of the tournament.

Things got off to a nervous start in the first round robin game of the tournament against Tobana, as Arashi JR got scored on in the very first minute of play. Tobana had a 2-0 lead after the first period of play and held that lead until very late in the game when Arashi JR struck twice to tie the game with goals by Trent Jennet and Aaron Marubashi in the last minute of play. The character displayed from coming back late seemed to set the team on their way for the rest of the tournament.

Defense and goaltending ruled on Saturday as Arashi won the next two seeding games without giving up a goal to finish the round robin with two wins, one tie, and no losses, and on top of the four team division. Arashi JR defeated the Stingers 4-2 in the semi-finals powered by two goals from Scott Yoshikuni and one each from Marubashi and Justin Saisho.

With the win, Arashi JR entered the final game against the Ruff Riders as heavy favorites. They had blanked the Ruff Riders 4-0 in the round robin and the tournament was theirs for the taking. The score was tied 2-2 in the second period and the outcome in doubt until forward Daniel Ohashi took matters into his own hands with one of the nicest goals in the entire tournament.

Ohashi, a lanky and smooth center, started with the puck in his own zone and carried it swiftly up the right side, slipping a few stick checks on his way into the Ruff Rider zone. Once in the zone, he cut laterally to his left and across the center of the slot before releasing a beautiful wrist shot to beat the goalie top shelf on the glove side. The highlight reel goal turned out to be all Arashi JR needed as 15-year-old goaltender Alex Dolomaya shut the door the rest of the way. It was an extremely impressive showing, and a great accomplishment for such a young team, competing in the top level of the tournament.

The line of Marubashi, Yoshikuni, and Saisho generated most of the offense for the young team, but according to coach and manager Wayne Yamashita, it was the commitment to team defense that enabled them to win.

“Our defence was solid all tournament. They are so smart with the puck and so calm. It’s rare to see that much composure at such a young age. I think the main difference was our goalie and defense. Six goals in five games tell the story.” Yamashita said via email.

The defensive unit was Trent Jennet, Ryan Maeda, Nicholas Kissoon, and Jeff Ohashi. Arashi JR now sits as a back-to- back AHC champion and a proud representative of the Japanese community at the annual Asian Ice Hockey Championships.

Arashi JR now sits as a back-to- back AHC champion and a proud representative of the Japanese community at the annual Asian Ice Hockey Championships.

This article was published in the April edition of Nikkei Voice.

Photo information: The Arashi JR team won the title for the second year in a row at the Asian Hockey Championships. Photo: Wayne Yamashita 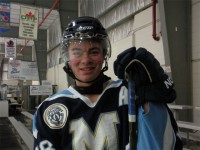