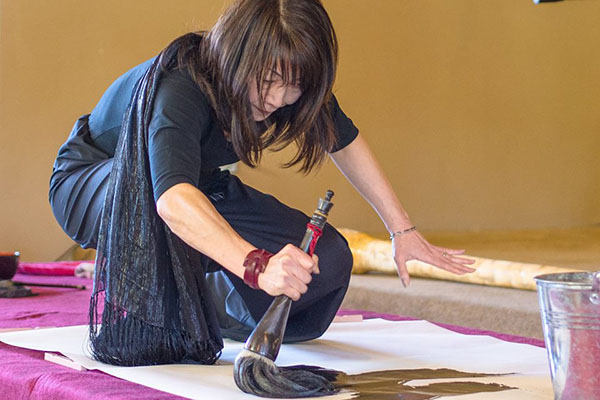 At every stroke on the washi paper made from three plant varieties, calligraphy artist Etsuko Essence Inoue appears to be as surprised as the audience at the kanji that seems to write itself.

If she feels any pressure, her steady hand gripping the large mop-like brush made of horse or goat hair makes it hard to detect. The brushes flow smoothly and trace only once through the word she’s written many times before. In a live performance there are no second takes when the black ink hits the thin paper. What is written bears her red signature stamp and is taken home by audience members at the Powell Street Festival in Vancouver.

She is often seen performing with Alcvin Ryūzen Ramos, a shakuhachi master based in Sechelt, B.C. The shakuhachi is a traditional Japanese flute made from bamboo. They partnered again at the opening reception of her exhibition Eastern Echoes at Dr. Sun Yat-Sen Classical Chinese Garden running July 1 until Aug. 31. The two improvise on stage, which makes surprises a regular part of their show. The Fukuoka-born, Canadian artist laughs recalling their recent Powell Street performance where Ramos was dressed in a traditional white cloth.

“I was going to write down white cloth—that was my image,” said Inoue. “But once I stood on the stage with the wind blowing, the sunshine, I did something completely different. I even asked Alcvin to move and asked him to play first.” 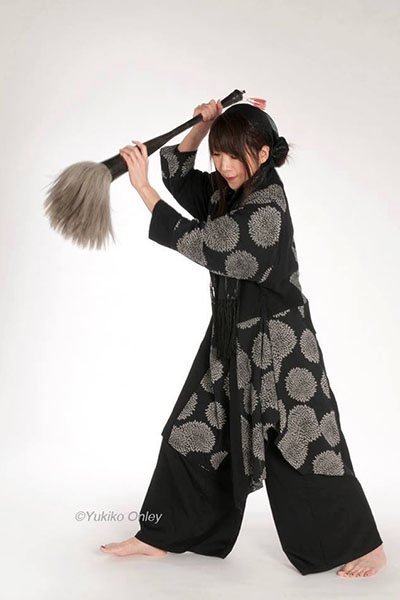 The large calligraphy brush Inoue uses is usually made of goat or horse hair, and she paints on washi paper, made of three plant varieties. Photo courtesy: Etsuko Essence Inoue.

When asked if she feared failure during a live performance, “I don’t care,” she responded. “My master told me when I wanted to use the large brushes instead of the smaller ones that you don’t have to think about that, just do it.”

Their friendship and collaboration dates back to six years ago at the Vancouver Cherry Blossom Festival. Ramos had seen Inoue perform alongside a keyboardist. Seeing her traditional artwork, he offered to play the shakuhachi.

“Whenever we get to perform in any kind of Japanese space is always a highlight whether it be a Japanese garden, or a temple, because it fits—the music, the calligraphy, the art and the architecture is the best,” said Ramos recalling a performance for Tsunenori Nitobe, the grandson of Inazo Nitobe for which the Nitobe Memorial Garden at UBC is named.

“Etsuko is pretty wild. I go pretty free with her,” Ramos added. Some artists he works with prefer listening to Ramos’ pre-recorded tracks to imagine the flow of the performance. Not Inoue. Ramos’ music is improvised as much as Inoue’s calligraphy and painting performances. The collision of their creativity led to experimental ideas like using Ramos’ skin as canvas for Inoue’s calligraphy in white ink, and it’s likely that Ramos’ will be playing while Inoue writes on paper wrapped around his body. 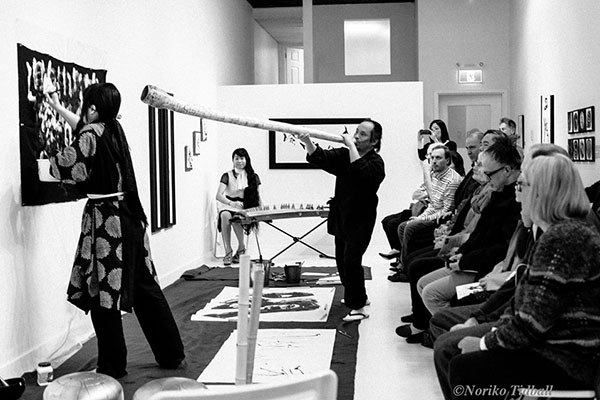 What caught the attention of Leticia Sanchez, curator at the Dr. Sun Yat-Sen Classical Chinese Garden, was her detail for simple things—the expression of a cat or monkey, and flowers painted in gold likened to ancient Chinese statues.

“We see the forest, and sometimes we don’t see the trees. And these artists certainly make us see the trees and then the forest,” said Sanchez. “No matter who you are, the way you think and the way you learn, her performance gives people the opportunity to use their five senses.”

The “multi-sensorial” component is Inoue’s most potent tool in connecting with audiences. She dispels the cloud of mystery that art is shrouded in. It has been key for the Japanese art form to flourish in Vancouver. Before 2008, the artist noticed that her paintings were much more accessible than her calligraphy pieces to the visitors of her exhibition at the Vancouver Public Library. It was matter of educating the visitors how it was produced and engaging their senses in the process.

She felt the urge to demonstrate to the visitors, so with a blank canvas and brush in hand, she turned on the music, and started an impromptu demonstration that drew a large crowd. The resonance of her art has grown wider ever since. The large crowd she first drew at the library has grown over the years to  hundreds who gather at festivals and celebrations around the city, even inspiring other artists to seek creative collaborations with different medians such as Taiko and theatre. The evolution of calligraphy performance has only just begun.

Jenny Peng is a Canadian journalist based in Vancouver. You can follow her at @jennypengnow or view her work at www.jennypeng.net.