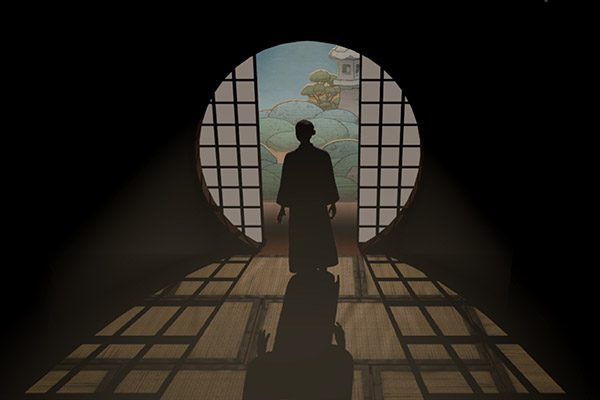 TORONTO — In artist Randall Okita‘s new project, The Book of Distance, he introduces audiences to a great hero in his life, his grandfather, Yonezo Okita. For Okita growing up in Calgary, his grandfather was always close by in Lethbridge. They visited each other often, and there were many family fishing and camping trips.

“He was a big part of my life, and he was also the quietest person I’ve ever met,” Okita tells Nikkei Voice in an interview. “I never saw him angry, and increasingly as I got older, I would realize how remarkable that was and how remarkable of a character he was. I always thought there was this contrast, as I learned more about our history, about his history and what happened to our family during the war, it made me curious and in awe at the same time.” 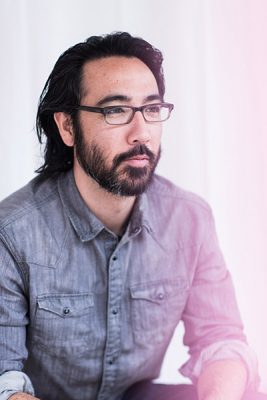 Director and screenwriter of The Book of Distance, Randall Okita. Photo credit: NFB.

Born in Hiroshima, Japan, Yonezo immigrated to Canada in 1935 as a young man to get married and start a new life. The Second World War and the racism that ensued against Japanese Canadians changed his life forever. The war and hardships that followed were not something Yonezo talked about with his family.

In The Book of Distance, viewers follow Okita as he pieces together his grandfather’s story from parts he does have; photographs, old letters, and conversations with his father. Using virtual reality technology, Okita leads audiences through a journey where they can uncover and piece together Yonezo’s story, to experience and try to understand what it must have felt like to go through those moments in history.

Virtual reality (VR) is a computer-generated simulation, where with a pair of special goggles and controllers, viewers are fully immersed in an artificial three-dimensional world. Viewers can visit imaginations of other countries, made-up worlds, the future, and even the past. In The Book of Distance, Okita takes viewers through a visual and interactive journey of his grandfather’s past, starting in 1935 Hiroshima, Japan, across the sea to Canada, to the strawberry farm where he started a family and to the sugar beet farm during the war where he tried to keep that family together.

Produced by the National Film Board of Canada (NFB), the studio invited Okita and three other artists to experiment with VR technology in the summer of 2016. Okita was a natural artist to embark on this project because of his background in filmmaking as well as sculpture and interactive installations, says NFB producer David Oppenheim. The team wanted to craft an experience that would be different from reading a book or watching a film by creating opportunities where audiences could interact with the story and move through a three-dimensional space they designed. They wanted The Book of Distance to be a story people talked about like an experience they had, versus a story they watched or were told, says Oppenheim. 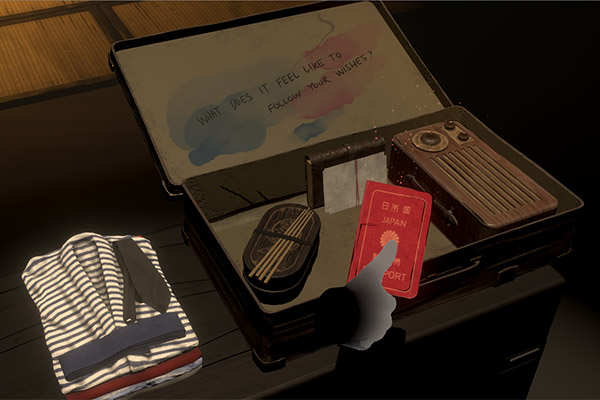 In The Book of Distance, participants can imagine what it must have been like to pack and embark on a new journey to Canada in 1935. Photo credit: NFB.

“We wanted it accessible to someone who maybe was more familiar with reading a book or watching a film; to create something that for a more mainstream audience, people not familiar with technology, to really feel comfortable with and lose themselves in,” says Oppenheim.

VR technology is still a relatively new and experimental medium, with a lot of space to explore. In the film industry’s past, new technology has not been accessible to all filmmakers, especially from diverse backgrounds. While the film industry is making improvements, it still has a long way to go, says Oppenheim. As a public producer, the NFB wants to make sure these tools and technology are available to a diversity of storytellers, and they are telling Canadian stories to Canadians, by Canadians.

“As a result of systemic racism, as a result of government-sanctioned racism, there was a loss in Canada, the silencing of a community and those reverberations have played out across generations,” says Oppenheim. “[We want] to create space for the right conversations to occur around the impacts of state-sanctioned racism, around what happens when you make your own citizens, or a group of your own citizens into the other. That part of it was really important for us from day one, working with Randall and figuring out how to tell the story.”

Yonezo’s story is one Okita has wanted to explore for a long time but wanted to make sure he did it justice.

“I didn’t want to look away from the emotional challenges involved in telling this story but also include the essence of resilience and courage that I think were included in my grandparents’ journey to continue with the pride, integrity, and dignity that they did. To be able to still find good, to share with their children, and still point them in the direction of love.” 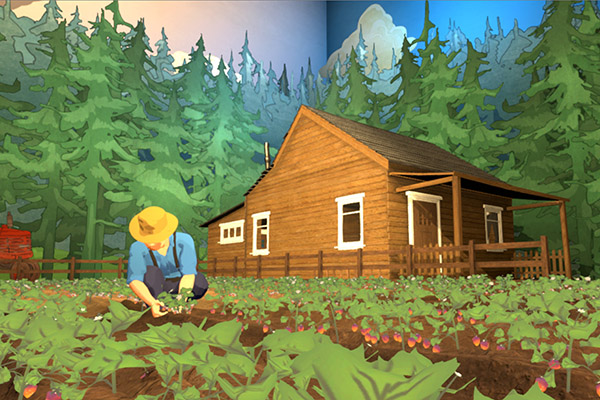 The story also focuses on three generations of the Okita family; Okita, his father, and his grandfather. The three generations ground the story, and emphasize while these events happened 80 years ago, their legacy trickles down through generations and exists within people still alive today. When the VR experience begins, it dedicates the story to the fourth Okita generation, Okita’s nephew, who is named after Yonezo.

The Book of Distance includes clips of interviews with Okita’s father talking about Yonezo. Over four years ago, when Okita began working on this project, his father was hesitant to be interviewed. A private person, these stories were personal to the family, and ones that were not often talked about. So when it was time for Okita to show his father the final product, he was nervous.

“The day that I showed him [The Book of Distance] was one of the most wonderful and treasured days of my storytelling experience,” says Okita. “He was asking a lot about the equipment, and he was asking if the equipment could take moisture. I said, ‘What do you mean?’ and he said, ‘Can they take moisture from the inside?’ I realized he was getting quite emotional inside the headset.” 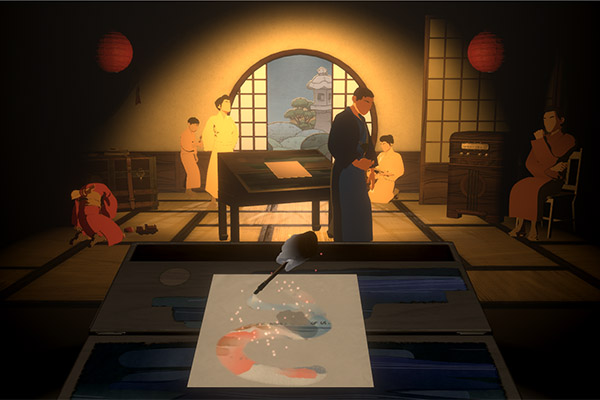 Since The Book of Distance premiere, Okita says it has changed the way his father talks about their family history. Okita thought choosing to tell this story, the process of putting it together would transform and change how his family understood and internalized Yonezo’s experience.

But now that The Book of Distance is being experienced by people around the world, it continues to transform the story, says Okita.

“What I realized in this really beautiful way, is that the conversations that we’re having, the sharing of this story continues the transformation, this very moment is a chapter in my grandfather’s life,” says Okita. “I feel like this is what transforms it from a story that might be connected to shame and sadness to a story that includes hope, and more celebration of my quiet hero. My father continues to be transformed by knowing that his voice is being shared, and I think that changes the way my family members think about it.”

The Book of Distance premiered at the Sundance Film Festival in January of 2020 to critical and public acclaim. Since then, it has been showed and won awards at film festivals around the world, including the Vancouver International Film Festival and Festival du nouveau cinéma de Montréal.

For more information about The Book of Distance, visit: www.nfb.ca.


Thank you for sharing this is a great and interesting article