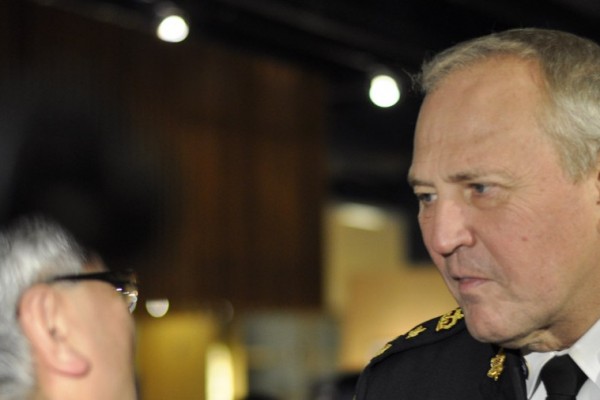 Top among concerns for community members were Toronto Police’s safety while using firearms and tasers following the death of Sammy Yatim this summer, the increasing number of fatalities at crosswalks in Toronto’s suburbs, the growing problem of new Torontonians being unable to report abuse of any kind, and the end of the police’s hiring freeze.

Freeze on hiring offices will end next year, and sixty recruits are being out into training in December.

"We have about 300 fewer officers today than we did three years ago," said Blair.

"We really value language skills," said Blair on the end of the freeze on Toronto a police hiring.

“For the past almost 20 years there have been a number of consultations between the police and Toronto’s communities,” said Chief William Blair.

“It’s important on consultation that we don’t just come together for suggestions,” said Blair. He said tot he audience that consultations are a chance for Toronto’s communities to come together and bring up real concerns to this public forum.

One audience member asked Blair what he plans to do about countdown crosswalks that are causing an increase in fatalities, especially in Toronto’s seniors demographic.

"Us seniors don't go to school anymore," an audience member asks police how they are going to educate seniors. pic.twitter.com/UhT66y9XJe

"the value of this meeting for me is to hear from you," said Blair. pic.twitter.com/Q0Qly46x7Q

Japanese community members also brought forward issues for the many Japanese students who come to Toronto each year to study English.

According to a Japanese Social Services spokesperson who was at the town hall, language is the major problem faced by Japanese students who come to Toronto seeking job experience. The language barrier prevents students from having confidence in their ability to report crimes and also to be key witnesses in investigations.

Blair said Toronto Police have developed programs to give new citizens education on their rights and protections while in Toronto; however, the problem is how deliver these messages to them. The Chief said that he relies on community organizations to help get these young people to come forward with their concern and not to be afraid of Toronto’s Police Service.

For live coverage of the event, be sure to check out our Live Twitter Feed.

Below is a small slideshow of some of the other events from the night.

Scams Target Almost Everyone These Days, Here’s How to Protect Yourself | Nikkei Voice

Leave a Reply to Scams Target Almost Everyone These Days, Here’s How to Protect Yourself | Nikkei Voice Cancel reply