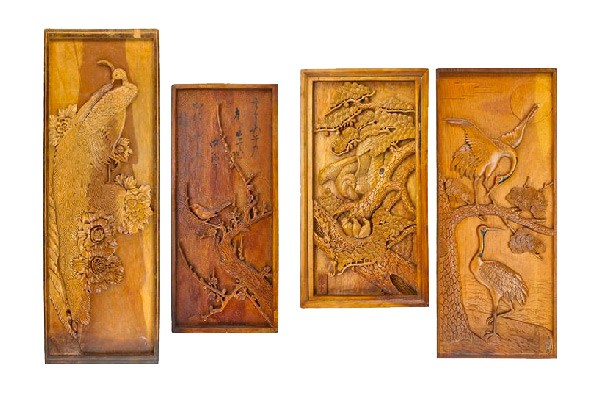 An image of a hand-carved relief that was to go on auction at Rago Arts. The piece comes from a collection of art curated by Allen Hendershott Eaton (1878-1962) who had been given the items by Japanese Americans while he researched his book on the internment in 1952. Image courtesy: Rago Arts

Rago Arts, an auction house based in New Jersey, has removed hundreds of pieces of artwork from Japanese American internees from an auction that was scheduled for today.

Japanese-Americans protested the auction of items owned by author and speaker Allen Eaton who died in 1962. According to the New York Times, the consignor of the collection is a family friend and is not in a financial position to donate the items to a museum, so they were to be auctioned.

Many of the items were given to Eaton as he wrote his book Beauty Behind Barbed Wire: The Arts of the Japanese in our War Relocation Camps. A petition on Change.org asks the auctioning house to remove a number of lots so that the ownership of the items can be ascertained.

“It is a betrayal of those imprisoned people who thought their gifts would be used to educate, not be sold to the highest bidder in a national auction, pitting families against museums against private collectors,” Satsuki Ina, a Japanese-American educator and filmmaker, wrote in the petition.

Today the items have disappeared from the auction house’s website. According to CNN, the auction house stated that there is a discussion that needs to be had about the sale of historical items that extends beyond what is legal. The spokesperson said they hope this will be the beginning of a discourse on this issue.

George Takei, who was an internee in two separate camps, according to a post on Facebook will be acting as an intermediary between the auction house and Japanese American museums to figure out what the next steps are for the collection. A spokeswoman from Rago Arts told the New York Times that the holder of the items did not feel comfortable sending the items to one museum over another, which initially spurred the decision to auction the items.

Over 117,000 Japanese Americans were forcibly interned in camps in 10 different locations during the Second World War. Many of the items were mementos from that time often photographs of those living in the camps or paintings that depicted the surroundings see by internees.