Posted by Matthew O'Mara
Now this is a bike that definitely needs a lock.

Early last week, Audi unveiled a new carbon fibre bike in Japan that weighs in at an impressive 5.8 kilograms or about 12 pounds.

What’s more impressive is the bike’s price tag at about $19,500 (USD), which is equal in cost to some relatively inexpensive cars; however, a spokesperson from the car company say the bike’s futuristic materials are behind the weighty cost.

“I don’t have much expertise in bicycles, but I’ve been told it’s extremely rare for a bike to weigh less than 6 kilograms,” an Audi spokesperson told the Wall Street Journal.

However, what really ups the cost of bikes like the one created by Audi is its rarity. Worldwide, there will only be about 50 made with only one going on sale in Japan.

According to several resources online, Gunter Mai‘s 2.7 kilogram road bike is considered to be the lightest in the world while still remaining strong enough to take on the paces riders will put it through.

Cervelo‘s R5 series has a frame that weights only 808 grams and costs only about half what the luxury car maker’s bike will cost at a minor increase in weight. The bike received a limited release with about 325 frames produced in 2013.

There are also bike makers who have developed similarly strong, light-weight road bikes made from bamboo. Calfee’s Bamboo Adventure weighing in at 8.9 kilograms or 19.8 pounds. The custom-made bike takes over 40 hours to create and costs about $3,000, so a further reduction in price at a modest increase in weight.

Audi’s road bike is certainly pretty, but the owners should definitely buy an expensive lock to go along with it. 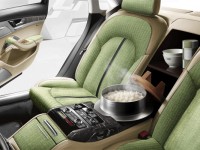