Bali Big Brother Review: A philosophical take on being a business tycoon 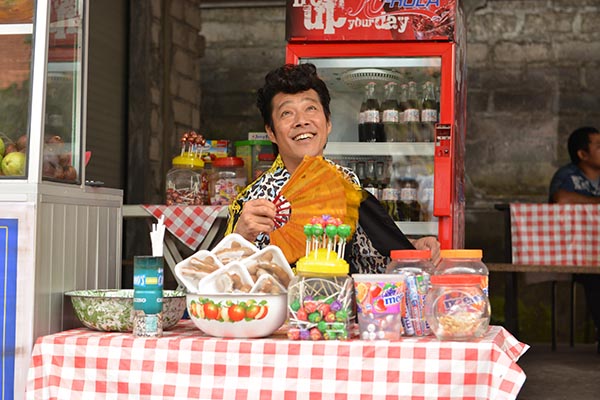 Aniki, played by Shinichi Tsutsumi, is an eccentric millionaire who has found paradise in Bali, Indonesia, and he has a lot to teach Shoko when they meet. Photo courtesy: Reel Asian Film Festival

Released in January this year in Japan, Bali Big Brother is a comedy adapted from author Sho Kuroiwa’s best-selling novel ‘If You Work Abroad You Can Become a Tycoon’. The film’s director Toshi Lee, 51, was born in Osaka, Japan and is best known for Detroit Metal City (2008, Time Trip App (2014), and Box! (2010).

The film has an all-star cast with Shinichi Tsutsumi, Machiko Ono, Naoto Inti Raymi and Hiroshi Tamaki in the lead roles, but at the heart of the film is learning how to face and overcome changing circumstances

Shoko is the former president of a small company in Japan that failed spectacularly. Now she’s abandoned her life in Japan and moved to Bali, Indonesia, which is where she find Aniki or as he’s known to the locals “Big Brother”.

A middle school dropout who became a wealthy property magnate in Bali, Aniki has a special kind of philosophy that has helped keep him alive and thrive. He lives a lavish life in the country with his friends by his side, but when the two meet they find an instant connection.

Shoko becomes his apprentice to learn his laid-back ways. What she finds behind the flashy clothes and bright, blonde hair is someone with a heart of gold.

Aniki is absorbed in his quest to build a kindergarten for the children in Bali, but he’s betrayed by one of his former business partners. From there it’s one road block after another as the construction reaches a deadlock.

The movie was much more interesting than I expected to be at first blush. Before watching the movie, I thought that it would focus strongly on the comedic aspects of Shoko and Aniki’s relationship, but in reality it has a good balance between the funny bits and the touching points and drama.

Aniki’s philosophy is often at the centre of the film’s touching side. These bits and pieces of wisdom are given to watchers as his little motos that have kept him going. Thing like, “Life is like Dragon Quest”, “What goes around comes around”, “Worry changes to that power called ‘help’.”

These messages from Aniki feel almost like a self-development book, but at the same time, as other reviews have also noted, they can also feel a little like being lectured while watching.

However, the big difference between reading a book and watching is this film’s setting.

Lee, the director, said about the reason why he filmed this work. “I wanted today’s people who have relationships that became weak because of the spread of the Internet and SNS to have a rethink on the importance and the power of the human relationship through watching Aniki and Bail’s people way of life.”

This is a must-see movie for people who want to make a big change in their life and it’s playing at the AGO Jackman Hall in Toronto Reel Asian International Film Festival (Reel Asian) on Sunday November 8 at 1:00 pm.