In conversation with Birds of Bellwoods double bassist Kintaro Akiyama 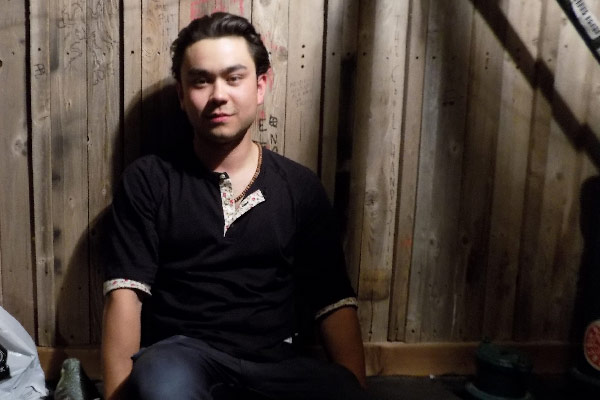 Kintaro Akiyama, seen here backstage at the Horseshoe Tavern, comes from a family of artists who have helped inspire his sound. Photo by: Kirsty Hurlbut

If you take a late afternoon walk in Toronto’s Trinity Bellwoods Park this summer, chances are you’ll come across a four-piece of young gentlemen in vests and shirtsleeves.

All but one of them has a string instrument slung across them and your ears are met with the swelling sounds of folk harmonies and the fiery choruses of a modern bluegrass band.

These young men are the Birds of Bellwoods, a Toronto-based “urban folk” ensemble, and leaning on the upright bass plucking out deep, resonating tones is Kintaro Akiyama.

“We’re all city boys, there’s no lying about that,” Akiyama tells Nikkei Voice sitting in another green space in Riverdale Park, “but the music we play speaks to a more rural setting and a more relaxed lifestyle.”

And the band certainly gives us a little taste of a rural setting in an urban environment with their nostalgic melodies, perpetuating what they classify as “Canadiana”— a rustic sound reminiscent of old Canadian folk with a new presence.

This just happens to be against the backdrop of a “folk resurgence” in Toronto’s music tastes today.

But Akiyama draws on a lot more than just his natural surroundings in his music.

Akiyama attended the Claude Watson School for the Arts when he was young and started playing classical piano at 7 or 8 years old, but his current instrument – the double bass – he began playing at the age of 12.

It wasn’t always fun, because “you gotta get over the hump of hating it” he says from his experience playing music from an early age.

Teaching music to children now, he sees a lot of that “hump”, while knowing that soon after music will become “cool again” in their eyes.

As he grew older, Akiyama continued in his musical education receiving a degree in Jazz Bass Performance from McGill, which had a huge influence on his performance with the Birds of Bellwoods.

The other members, Stevie Joffe, Adrian Morningstar and Chris Blades all come from artistic backgrounds as well, whether through music or the theatre, and they are no strangers to classical training, which comes out in the artful precision of their music.

Akiyama himself comes from, as he says, “a family of artists.” His sister Miya plays, his mother Danielle is a painter, who dabbles in music. His father, Denis Akiyama, as well as being a popular Canadian actor, is also very active in music.

He and his father joined up to play at the NAJC, the National Association of Japanese Canadians 25th anniversary of the redress at the Japanese Canadian Cultural Centre in 2013, which he reflects on thoughtfully.

“It was a nice experience,” says Akiyama. “First of all, I got to play with my dad, and then to play for that event—it was pretty powerful, you know, there were a lot of people there from different generations, and I was one of the youngest people there. That was a cool experience, to be involved in the Japanese community as well as the musical community…I think my dad really enjoyed it too, playing together.”

While the musical presence is undeniable in inspiring Akiyama, he mentions that his time spent practicing kendo at the JCCC as a child played into the kind of musician and person that he is today.

“It’s very intense…I mean it’s supposed to be fun but there’s a lot of respect around it and there’s a lot of proper rules, and at the same time it’s pretty violent…but I think that helped me give a little focus, direction and determination in my life.”

And you can certainly see the focus present in all the members of the band when they perform their sweet, soulful, and jaunty tunes with practiced elegance, yet a raw and rustic flavour characteristic of their live shows.

Whether influenced by the “gravity” of Trinity Bellwoods Park, an artistic family, or the ever-present world of classical music, Akiyama says in the end, “You’re putting out what you’re taking in… you’re drawing on every experience and, whether you like it or not, it seeps into who you are and what music you create.”

You can catch the Birds of Bellwoods Friday the 19th at The Cameron House, where the band is participating in North by Northeast (or NXNE) this year.

If you miss out, make sure to get to Trinity Bellwoods for the Great Heart Festival on June 21st to see the band in their old stomping ground.


[…] Akiyama continues to work with Birds of Bellwoods, and the band has been working on their second album, after their debut album, Victoria, was released in 2019. In the summer, the group usually hits the road, performing shows and in festivals across Canada, which of course, was not possible this year. […]