Bowlers of all ages show support in record numbers 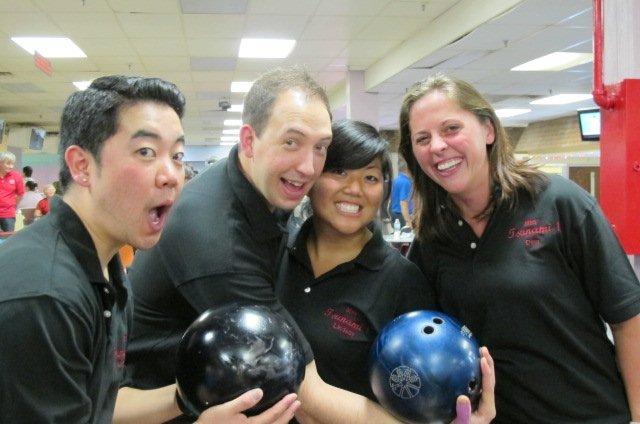 The Momiji Bowlathon continued to grow in its fifth year with 192 bowlers and a ercord set in funds raised. Photo: Jan Nobuto

I’ve been a bowler for over 20 years and not in the, ‘I go bowling with my friends or family once in a while’ kind of way. I bowl in leagues, somewhat competitively. Bowling to me is a sport, it’s a competition. I grew up with bowling, watching my parents bowl, bowling with my grandparents, and in leagues.

To say bowling is an important part of my life would be an understatement, so when I was asked to bowl in the Momiji Bowlathon for the first time a few years back I was excited to participate. The Bowlathon is now in its fifth year and the only thing that has changed from those early beginnings is the absolute success of the event.

The purpose of the Bowlathon is to raise money to help improve the common space at the Momiji Centre – all the non-private areas that benefit people living at Momiji and those who attend activities there. This year the turnout for the Bowlathon was exceptional – “192 bowlers far exceeded our expectations, and the sponsorship and raffle intake far exceeded any previous amounts raised,” announced Gayle Cali, the Momiji Bowlathon Committee Chair.

The event raised over $25,000, which is a new high for this event. In years past it would take multiple Bowlathons to raise enough funds to buy or improve the public areas of the centre.

With numbers like this, maybe that may be a concern of the past. These numbers, as impressive as they might be, are not what stood out to me. As I walked around the bowling centre in between my turn to bowl, I saw bowlers of all ages, some over 90, (as I would later find out), and others just young children. The committee has done a great job in turning this into a family event. “The last few years we’ve been encouraging family members, even grandchildren of some of the tenants.” (G. Cali). This year it was not just a great cause and fun event, it was a family event that underscores how the Japanese Canadian community supports each other, which is another reason why this event has become so successful.

After the bowling at Thorncliffe Bowl we hurried back to the Momiji Centre for the best part of the reception/dinner – the bento box. As they say, it’s worth the price of admission; at least it was for me. Before and during dinner, prizes were handed out starting with those who raised over $300. I lost count after the first fifteen names! It was incredible to see the number of people who raised more than that. Then it was raffle time with dozens and dozens of raffle prizes. However, even after purchasing more than 50 raffle tickets and tables loaded with prizes, I didn’t manage to win one, but that bento box sure was delicious!

The Bowlathon committee does a great job with this event and while we should take a moment to thank them for their volunteer work towards this great cause, they would like to thank the participants. “A great big Thank You for exceeding our expectations, and for coming out and supporting our seniors, both at Momiji and the JC Community.” (G. Cali).

Whether you raise a lot of money, get prizes, or show up and have a lot of fun with your family, the event helps the community and for that, every participant walks away a winner.

This article appeared in the June issue of Nikkei Voice.