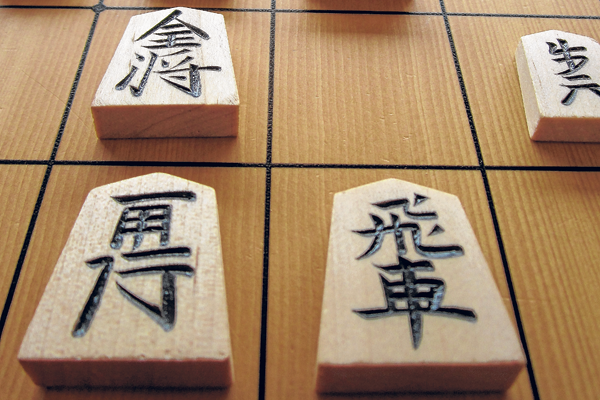 Adam Matheson’s army was doomed from the very first move on the shogi board.

Matheson’s goal was simple, attack a single unit. Under the control of Toronto Shogi Club president Colin Ng, it was a task a little easier to say than to actually do.

Within minutes, Matheson’s army lay in ruin. It was a swift defeat and one that the new player was totally unprepared for.

“I basically tried to throw all of my pieces at him and I ended up losing,” Matheson said in an interview with Nikkei Voice.

“I thought I would move all of my pawns forward and use my gold and silver generals to corner him, but he just outmaneuvered me completely,” he said. “I didn’t know how the pieces could link together to support each other and it created gaps in my attack.”

When all was said and done, he the took the defeat as a lesson about the powerful techniques that make shogi quite a unique board game.

Like many young Canadian, Matheson is part of a new generation of shogi players.

Brought up in the United Kingdom, Matheson had learned how to play games like chess and checkers, but it was when he went to Japan that he found these new games.

Picking up Go from playing games with janitor who worked at his school, he’s developed a love of the strategic and technically sophisticated games.

Much like chess, Shogi is a game of strategy, but it has its twists. Pieces on the board are divided into classes and your opponent’s pieces can become your own if you capture them. Players can also upgrade their units adding a whole other layer of complexity to the game.

And while finding an opponent in Canada may have been once confined to shogi clubs, players have now taken the game online to the Internet.

“Now that there are various websites where you can play online and various books in the English language, it’s a lot easier for people to get into the game,” says Devon Rowcliffe, president of the Vancouver Shogi Club.

“I think traditionally if you asked the average person in Japan what they think of shogi they’d think it was something stuffy and played by the older generations,” Rowcliffe says. “But there been a bit of a re-launch of the game in both Japan and here, so people are looking for strategy games where you can exercise your brain.”

Rowcliffe, along with Canada’s other shogi clubs, are also hosting a Canada-wide Shogi Championship, the first of its kind in almost six years.

With resurging interest in the game, Rowcliffe hopes the tournament will help get more of the younger generations involved with the board game.

The winner of the tournament will also receive a travel package to the International Shogi Forum in Shizuoka, Japan where they’ll be able to play against some of the best in the world.

Rowcliffe says that by getting younger people into playing the game, he hopes Canada will be able to have a consistent representative at the conference.

“In this internet age it’s very easy to get resources and study behind the scenes,” he says.

In 2012, Polish college student Karolina Styczynska shocked the shogi-playing world by being one of the first foreigners to beat a professional Japanese player.

Picking the game up after watching some of the animated television show Naruto, Stycznska spent time studying the game and watching matches to get better. After playing against some players online, she was invited to play against 3-dan professional player Sachiko Takamure, and soundly defeated her.

Canada’s tournament is set for June 7 to 15, and will he hosted online at 81Dojo.com. And let’s cross our fingers that we’ll find our very own shogi wunderkind who might be able to sweep the shogi forum in Japan later this year.

For more information be sure to check out the Vancouver Shogi Club’s website.