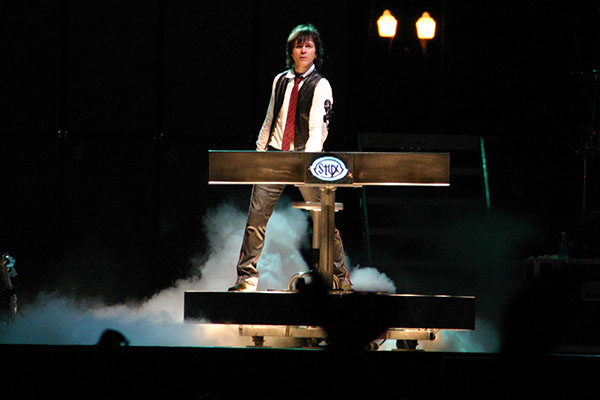 Lawrence Gowan is the lead vocalist and keyboardist of the band ‘Styx’, but also performs solo. Photo by: Jim Simonson

On April 16th, Canadian-Scottish musician Lawrence Gowan will be kicking off his longest series of solo shows in over 10 years. There will be a special performance at the Sakura Gala, the community’s largest annual fundraising event held at the JCCC in Toronto.

“I’m very happy and honoured to be participating in the Japanese Canadian Cultural Centre’s  Sakura Gala and helping to support the educational mandate of the Centre,” Gowan said in an interview with Nikkei Voice over the phone from a recording studio in Nashville.

“The Kobayashi Hall is a great setting to reflect upon and celebrate the wonderful and unique history of Japanese Canadians. I’ll be performing solo, playing a few hits from my past and perhaps a song from my current band – Styx. I’m really looking forward to it!”

Although his last solo album containing new material was released in the late 1990’s, his recently announced shows are selling out. Since 1999, he’s been recording and touring as the lead singer and keyboardist with the classic rock band Styx, playing up to 100 gigs every year and selling out shows across North America.

He may be low on the radar in his homeland, but Gowan is now possibly the most successful Canadian music artist of his generation in the United States.. A good portion of the tickets being snapped up for his southern Ontario shows are being purchased by fans from the U.S. that are willing to cross the border for the opportunity to see him “up close”.

His U.S. appeal is more than a bit ironic given the challenges he faced getting exposure in the early part of his career.

After ten years on the Toronto music scene and with a self-titled solo album featuring the guitar work of Kim Mitchell under his belt that, in his words “did well enough to land me back in my parents basement,” Lawrence Gowan welcomed 1984 unsure of his future as a working musician. A life-long Beatles fanatic, he had no idea that six months later he would be leading a rock and roll life beyond his wildest dreams. Living with Ringo Starr in Tittenhurst, John Lennon’s former home north of London, and recording his second album in the home studio that Lennon had built to record his iconic Imagine album, 13 years earlier.

David Tickle, a young U.K. producer with several hits under his belt, took notice of Gowan’s then-current demo recordings and set up the sessions for what would become his Strange Animal album. He signed up some of the hottest musicians of the day to assist, including the then-core of Peter Gabriel’s band. Much of the album was completed with the recording equipment John Lennon used for Imagine.

Released in 1985, Strange Animal was a number one hit in Canada, featuring four hit singles with the accompanying videos in constant rotation on the brand new MuchMusic. Gowan was selling out shows at home, tour North America to great acclaim (opening for bands like Tears for Fears).

With everything that happened it seemed that an international break would naturally follow. But, bizarrely, Columbia Records decided not to release Strange Animal in the U.S., concerned, as Gowan later learned, that his music would compete too closely with that of Paul Young, Columbia’s “preferred” singer/songwriter for the U.S. market at the time.

Although Strange Animal was on constant rotation on U.S. radio stations and the record was in high demand as an “import,” Columbia wouldn’t budge.

Following the Tears for Fear tour, much of the same studio team was reconvened and Gowan released Great Dirty World, featuring a prominent guest vocal appearance on the song “Moonlight Desires” by Yes singer Jon Anderson. The song raced up the charts and the Canadian sales of the album were even stronger than Strange Animal. Desperate to differentiate Gowan from Paul Young, Gowan’s manager even set up a series of gigs featuring Gowan and Paul Young on the same bill, with the goal of demonstrating that although the artists may have landed in the same niche, they were vastly different in their approach and style. Columbia still refused to budge and Great Dirty World was also denied a U.S. Release.

In frustration, Gowan parted ways with Columbia. His next album Lost Brotherhood followed in 1990, featuring Rush guitarist Alex Lifeson and a harder edge.

With an eye to re-launching his career by modifying his sound to be guitar rather than keyboard-based, the tongue-in-cheek title …But You Can Call Me Larry was released in 1993. Reviews were positive, U.S. airplay followed and the album was followed-up in 1995 with the optimistically titled And the Good Catches Up. Gowan continued to tour and record in Canada and in 1997 was invited to perform at and contribute a song to the memorial convert for Princess Diana organized by Elton John in 1997, the same year that he toured as an opening act for Styx, singing and playing solo on a piano.

In Montreal, Gowan’s opening performance for Styx won him three encores before the headliners were hit the stage, creating an impression sufficient enough for Gowan to receive the first call to join the group when their original lead singer Dennis DeYoung stopped touring with the group.

If you’re wondering what the “strange animal” has been up to for the last few years look him up on YouTube and, better yet, check out his tours this spring and summer at www.gowan.org.

If you’re in Toronto in mid-April, you can catch him at the Japanese Canadian Cultural Centre’s Sakura Gala on April 16th.

Mata Ashita launch brings together Japanese Canadians from across the country
February 4, 2021