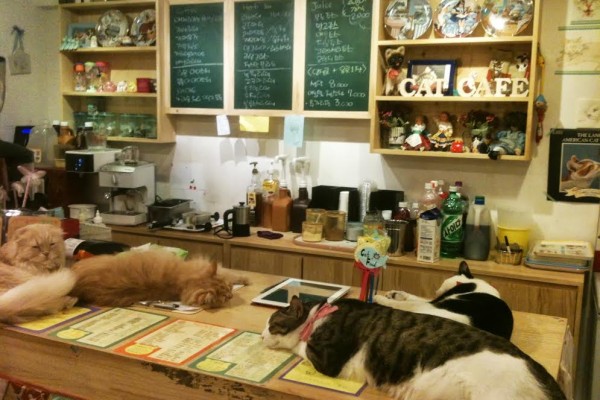 You might see some “cool cats” at a local cafe, but have you even been to a real cat café before?

It might sound like a strange idea, but these friendly feline coffee houses have been popping up in Japan for years and they’re starting to gain steam here in Canada.

A cat café works just how you’d expect it to. Customers come in and spend time with the cats. It all started Taiwan in 1998 and became more and more popular with local residents and tourists from Japan.

In 2004, Japan’s first cat café “Neko no Zikan”, which means ‘cat time’ in Japanese, opened in Osaka and is still open to this day.

Now there are over 150 number of cat cafes in Japan, which is the largest number in the world according to CNN News.

This movement in cat café openings has led others who have fallen in love with this particular concept to open up locations in their own countries. It’s an idea that has been scattered around the world in places such as Munich and Berlin, Paris, Madrid, and more.

Yet, no cat cafes have opened in North America except for a small pop up shop in New York in April, 2014.

But, Canadians could soon be getting a little meow in their mornings as the founders of these small cafes are reaching out online for donations.

One of those is Jennifer Morozowich, who is an experienced volunteer worker that has rescued countless cats from shelters with kill policies. She loves cats and is now trying to open cat café called “Toronto’s Kitty Cat Cafe” in Toronto.

“I’ve been rescuing cats for most of my life and I have a love/hate relationship with cat shelters,” Morozowich wrote to Nikkei Voice. “There are too many high kill shelters in Canada and not enough government funding to help assist them. I also don’t believe animals should be in cages.”

She has been preparing to open it and has some good ideas on how cats can make us happier.

For people, cat café can be a kind of therapy to make them healthy by easing depression, lowering blood pressure and alleviating their stress leading to happier, healthy, stronger people.

Moreover, cat cafés will also be a new avenue for cat adoption. Cats living in there all come from kill shelters through the help of T.E.A.M. Cat Rescue which fosters these unwanted felines. Cat adoption days will be held monthly, according to Morozowich.

Even though there is a race to open the first cat cafe in Toronto, there are locations already opening in other provinces.

“Café Chat L’Heureux” is opening in Montreal and will likely become the first cat café in Canada. It is already prepared and finished everything, but now owner Clement Marty, who was inspired through visiting cat cafés in Japan and Korea, is waiting for a response from Montreal’s Ministry of Health to see if they get the green light.

His love of Asian culture has taken him to Japan and Korea and he thought cat cafés would be nice for people in big city. 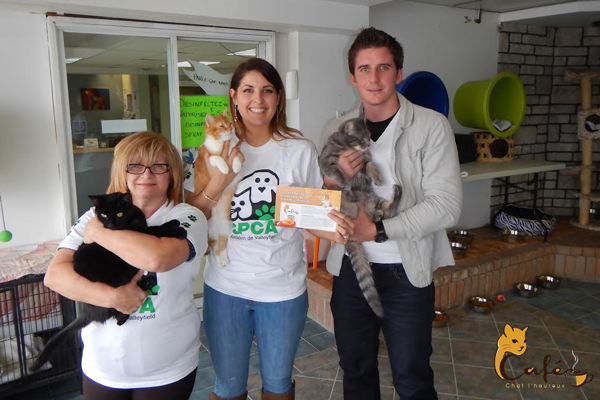 Clement Marty, seen right, is just one of the many potential Cat Cafe owners in Canada. Working with the SPCA, he hopes to give cats a better life by helping people get to know these loveable animals better.

“The most important for this concept is the welfare of cats, I don’t want that it will be only something temporarly,” Marty said. “I want the Café Chat l’Heureux to become a place where all cat lover want to go each week, and where all people can find informations about cats. It would be a educational cafe.”

It is said that there is over 500,000 abandonments a year around Canada, according to the BCSPCA.

To encourage people to cultivate a better understanding about the behavior of cats, this cat café is planning to hold regular seminars and conferences for children, teenagers, adults, and the elderly hosted by veterinarians and cat behaviorists.

That’s the great thing about these cafes, they all want to help support and promote animal welfare.

And there are more and more proposed locations, potentially bringing cat café to Canada in Toronto, Vancouver, and Montreal.

According to one of our commentors, the first Cat Cafe in Canada is already open. Le Cafe Des Chats is located in Montreal and you can find out more about the cafe at this link. 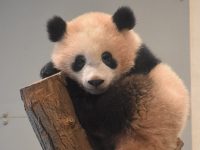