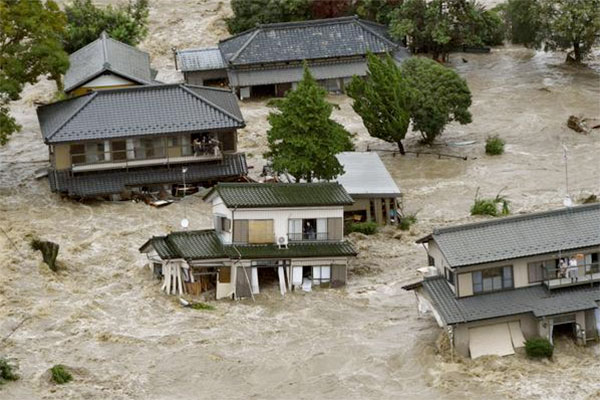 A home in the City of Joso floods as the Kinugawa River overflows. Photo courtesy: Twitter

JAPAN — The residents of a small town north of Tokyo have been forced to evacuate after an unprecedented rainfall brought flooding and mudslides to the region.

The City of Joso required helicopters to airlift citizens out after severe flooding caused by an overflowing Kinugawa River. At least eight people are missing and many more are still waiting to be evacuated.

Takuya Deshimaru from Japan’s Meteorological Agency said that this is an unprecedented rainfall for Central Japan.

According to the BBC’s Mariko Oi, the Kinugawa River bursting its banks took experts by surprise. She notes that Japan is usually hit by 20-30 massive rainfalls, but this would be Japan’s 18th and one of its most severe this year.

Media in Japan, like Associated Press Japan Bureau Chief Ken Moritsugu, say that the breaching of the river will prolong the disaster and it could take weeks for it to be cleaned up.