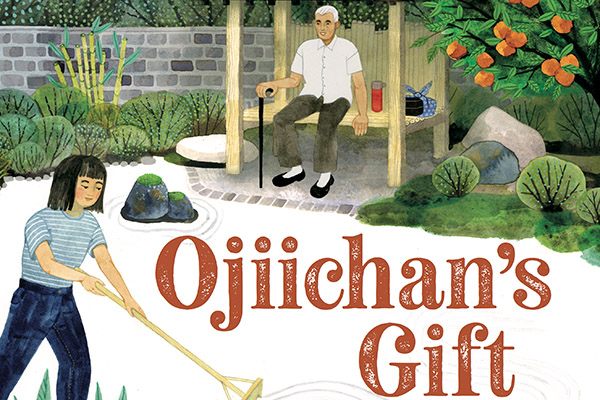 Chieri Uegaki’s new book, Ojiichan’s Garden, was inspired by questions she wishes she asked her father. Uegaki is the author of Ojiichan’s Gift, as well as other children’s books like Suki’s Kimono, Rosie and Buttercup, and Hana Hashimoto, Sixth Violin.

SUNSHINE COAST — Ojiichan’s Gift by Chieri Uegaki is a picture book that tells the story of the relationship between a young girl and her grandfather. Mayumi lives in North America with her Japanese mother and Dutch father.

She visits her grandfather in Japan every summer to help tend to the stone garden he created for her when she was born. The garden is their special place; it’s a place they care for together and where Mayumi learns from Ojiichan.

One summer, everything changes. Ojiichan has grown too old to keep living in the house with the garden and must move out. Mayumi experiences feelings of frustration, acceptance, and eventually calm satisfaction as she finds a way to keep the memory of the garden alive for herself and Ojiichan.

With beautiful, lush watercolour illustrations by Genevieve Simms, this book deals with intergenerational relationships and the knowledge and traditions passed down from grandparent to grandchild. The book also introduces important topics such as aging, perseverance, reflection, and mixed heritage to young readers. Chieri’s writing, along with the illustrations, capture the different emotions and thoughts Mayumi experiences through the times of change. Ojiichan’s Gift is a heartwarming story of family change that young (and older) readers can relate to.

Nikkei Voice connected with Chieri to discuss her writing inspirations and process. 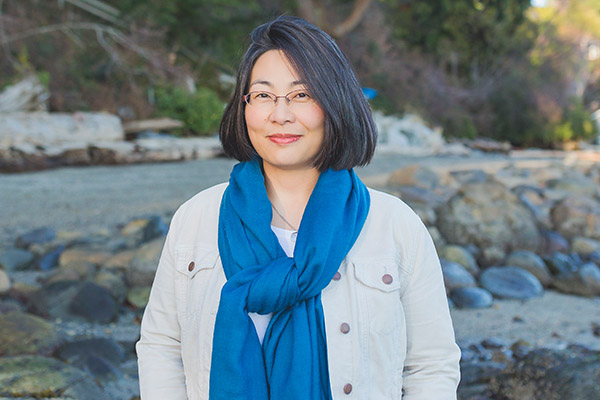 Nikkei Voice: What inspired you to write Ojiichan’s Gift?

Chieri Uegaki: My late father was the main inspiration for this particular story.

I have been thinking about ideas inspired by my dad for years but nothing really jelled for me until about six years ago when he became terminally ill. He died after a few short months, and one of the things I did to grieve the loss was write this story as a way to honour him and his legacy.

When I was a kid, I wasn’t especially appreciative of his work or talent as a traditional Japanese gardener, and didn’t have a lot of interest in learning anything about gardening from him. Helping in the garden was more chore than joy. That changed when I became an adult and had a garden of my own to tend, but when he got sick, I realized I had all these things I wanted to ask him and learn from him but it was too late. This story helped me work through that regret.

NV: What challenges do you face writing books for young readers?

CU: The biggest challenge is always to figure out how to write a fresh story that will interest and entertain a young reader. Also, since my stories tend to be on the long side (as far as picture books go), I have to think about the adult reader who may end up reading it aloud to a young audience, and hopefully give them something worth reading as well.

NV: Can you discuss the collaborative process you have with illustrators?

CU: Generally, once a manuscript is accepted, the publisher (and editor) will choose an artist they think will be a good fit for the material. I may be asked for suggestions or what style of illustration I picture for the story, and I usually see samples of potential illustrators work for feedback, but the final decision belongs to the publishing house.

During this process, which generally takes two years before the book is in hand, I get sent the rough sketches and revisions. I’ve been fortunate that every illustrator I’ve been paired with has brought my words to life pretty much as I pictured it in my head, only better.

NV: What aspects of the Japanese Canadian identity and experience do you think are important to show to young readers?

CU: I again draw from my own childhood and try to remember what I found so much fun—the food, the clothing, the festivals. Those are easy ways to get to know a culture and maintain a connection to a heritage. If those things appeal to a young reader, they may seek ways to further develop that interest and learn more about the culture. I also try to incorporate Japanese into the text if it feels right, to make it a natural part of the character’s world.

There are also some less tangible aspects of Japanese culture I try to weave in, values I learned from my parents such as the beauty of imperfection, the appreciation of nature and the patience to cultivate a garden or a skill, the importance of “gaman” and the “gambaru” spirit. 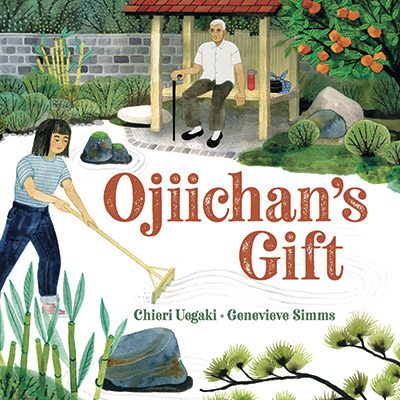 The cover of Ojiichan’s Gift, written by Chieri Uegaki and illustrated by Genevieve Simms. Photo courtesy: Kids Can Press.

NV: What were your favourite books as a child?

CU: I had so many but some that I still have on my shelves and reread are Fly Homer Fly and The Wump World by Bill Peet, the Little House series by Laura Ingalls Wilder, Anne of Green Gables by L.M. Montgomery, A Little Princess by Frances Hodgson Burnett.

One book I wish I had, that I borrowed over and over from my elementary school library was a collection of fairy tales with the most beautiful illustrations I’d ever seen. I recall that book as being the best version of fairy tales I’ve ever read. Nothing I’ve read since has come close to matching the memory of that particular collection. And there’s another book that’s out of print I also remember fondly with incredible blue illustrations called Salt is Better Than Gold. I LOVED that book.

NV: What authors/books inspire you?

CU: So many and too many to list here. And the list changes all the time with every new great book I read.

But when I get stumped on a project and need a reminder of why I love children’s books (as a reader as well as a writer), I have a few touchstone books that I go to: Higglety Pigglety Pop by Maurice Sendak, Pet Show by Ezra Jack Keats, Miss Rumphius by Barbara Cooney, The Animal Family by Randall Jarrell, Crow Boy by Taro Yashima, and a picture book by Chihiro Iwasaki called Yuki no hi no tanjoubi which I think translates as, “A Snowy Birthday” and the Bunny Planet books by Rosemary Wells. I find inspiration in all kinds of books, not just picture books, as well as in music, TV and movies. Basically, if it moves me, it inspires me.

NV: Can you talk about the process of rewriting your story to create Suki’s Kimono?

CU: Suki’s Kimono started out as an assignment for my Writing for Children workshop at the University of British Columbia (Creative Writing Department).

It had a different title then, and was much, much longer than it needed to be. It got positive feedback from the instructor, but I didn’t work on it any further as I wasn’t planning on becoming a children’s author.

About a decade later, I decided to get back into writing and as a refresher took a continuing studies course at Simon Fraser University on children’s writing with Ellen Schwartz. There, I learned some really helpful, practical information about what a picture book manuscript was, read a bunch of picture books, studied them and revised that old manuscript, cutting out huge chunks of it and got it down to less than a thousand words. Ms. Schwartz gave me some great feedback and encouragement, so I worked on the manuscript some more and got it into the best shape I could.

Then I entered a couple of writing competitions, one put on by the Asian Canadian Writers’ Workshop and one offered by The Writers’ Union of Canada (TWUC). Being shortlisted for the TWUC competition led to interest from two Canadian publishers. And thankfully, Kids Can Press came back with an offer to publish it. I had not ever seriously considered writing for children even though I loved reading as a child and still enjoy everything from picture books to young adult novels as an adult.

But after going through the whole editing process with Suki’s Kimono, seeing the illustrations develop, and then holding the final product in my hands, I was hooked and decided to keep trying to write more picture books.

NV: What projects can we expect from you in the future? Do you plan on writing novels?

CU: Hopefully more picture books! I don’t have anything accepted at the moment, but am close to having a new manuscript ready to submit for consideration. There are no guarantees of anything, and the road to publication is long. So even if my story was accepted tomorrow, it would still be a couple of years or so before it would be out in the world. And I’m slow. I work full time, so I write on the side.

As for anything longer, I think about it and have ideas I’m developing but nothing close to ready for anyone to read. It’s a goal, though, for sure, even if it’s never published.