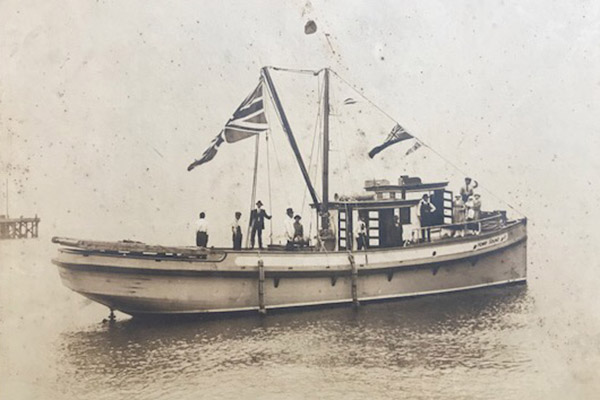 VICTORIA — It was an honour to speak at the event launch for The Lost Fleet exhibit at the Maritime Museum of British Columbia in January. The exhibit was on loan from the Vancouver Maritime Museum from January to March.

At the launch, I spoke about Susan Fukuyama and her family. A Sansei, third generation Japanese Canadian who lives in Victoria, Susan has a deep family history tied to the fishing boat industry. She has done some incredible research on her family. Her story, along with photos and artifacts were displayed in the exhibit, along with original art pieces by Victoria artist Marlene Howell.

Susan’s grandfather, Senkichi Fukuyama, was born in 1889 in Fukaura, Japan and immigrated to Vancouver in 1906. He travelled back to Japan to marry Yaye Okazoe in 1919. Yaye came to Canada in 1920, where they settled at the Crescent Rooms at 259 Powell St. Senkichi received his certification of naturalization on Feb. 1, 1921, and he and Yaye would have six children. 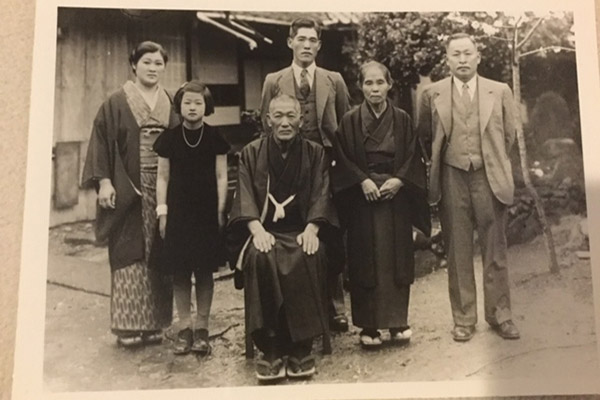 Yaye and Senkichi Fukuyama, at the far left and far right of the photo. Photo credit: Susan Fukuyama.

Five years later, in 1927, they expanded the business to include the Burrard Fishing Company. A third company, the Canadian Saltery, was added in 1936. By 1941, the Howe Sound Fisheries owned a fleet of five boats: Howe Sound, Howe Sound II, Howe Sound III, Howe Sound IV and Menzies Bay. Senkichi also ran a boat, the Orca G, with the Howe Sound fleet. After the bombing of Pearl Harbor, all the boats were confiscated and the companies and boats were forcibly sold.

In May 1942, the family was forced to move outside the designated “protected area” and their properties (2503 Triumph St. and two lots) were sold. They first settled in Revelstoke before moving to Vernon. In 1958 in Vancouver, the two men–Senkichi and Iwakichi–entered into the fishing business again. Fukuyama Ltd. and Sugiyama Ltd. were created as a joint venture. The companies were eventually run by their respective sons until they retired. Senkichi passed away in Vancouver on June 12, 1984, at the age of 95.

Susan contacted our project, Landscapes of Injustice, to learn more about her family history. We were able to quickly locate the records of her grandfather’s fishing boats, including one for the Howe Sound II, built in 1918, valued at $6,000 and sold for $5,430. Next we looked at our collection of files in the Bird Commission. 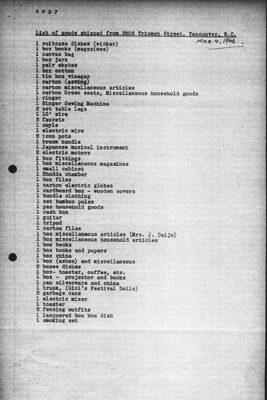 The Fukuyama family’s Bill of Lading, a list of possessions the family shipped to Revelstoke.

For those unfamiliar, the Royal Commission on Japanese Claims, known as the Bird Commission for Justice Henry Bird, ran between 1947 and 1950 as support for Japanese Canadians to investigate the forced sale of their property grew. For cabinet, it served as a way to demonstrate the government’s accountability. But the Terms of Reference, for which a person could contest the sale of their property if they thought that they were sold for less than fair market value, were very narrow and restrictive and prevented many people who had lost property from submitting claims. Thus, there are only about 1,400 Bird Commission files.

The records are useful and interesting and provide a glimpse into the arrangements the claimants made for their property, a perspective of what they claimed in 1947, including evidence like maps, lists, correspondence, and photographs, and evidence of how they argued their case for compensation to the commission, even within the restricted terms.

We found many interesting documents that included a claim for loss of earnings while the government used his fishing boat, and correspondences between Glenn McPherson and Frank Shears to advise Senkichi’s attorney to withdraw his Bird Commission claim as they both believed that the claim was outside the terms of reference. A later letter shows the withdrawal of the $10,276.85 claim for this company and a note that concludes that the claims were outside the terms of reference. 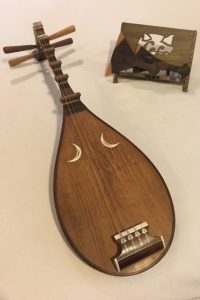 A biwa, which is still in the Fukuyama family’s possessions.

What struck me while talking to Susan were the smaller things that stood out to her. She was delighted to see a photo of the house from 1943 and was appreciative of having a record of how it looked when her grandparents lived there. We also saw the Bill of Lading for the possessions that her family shipped to Revelstoke as they had the means to be self-supporting. Looking at the list of contents she noticed there was a Japanese instrument listed.

We also came across a handwritten letter with her grandfather’s signature and she was amazed at how similar it was to her own father’s signature. It was encouraging to see these files help Susan bring her family history to life, providing a glimpse into her past as they coped with trying circumstances. This is one of the most rewarding and exciting output of the Landscapes of Injustice project for the Japanese Canadian community, providing access to these records so that family members can learn more about their history.

If you are curious about government records of your family, drop by our Landscapes of Injustice booth at Powell Street Festival, Aug. 3 to 4. 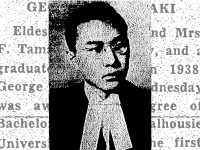 The case of George Tamaki and the Bird Commission
March 5, 2020


[…] to prove their accountability. This struggle unfolded in a federal commission, known as the Bird Commission, for its lead Commissioner, Justice Henry Irvine Bird. Japanese Canadians, their lawyers and […]