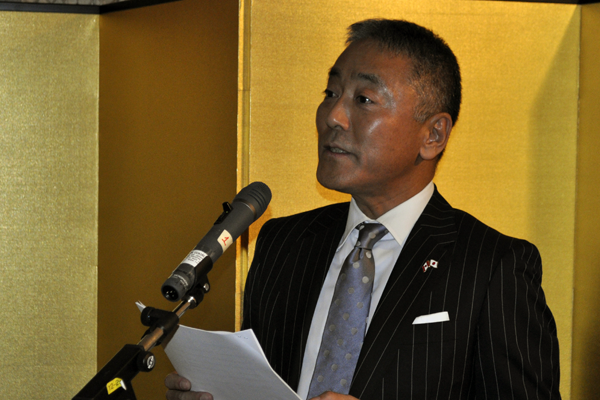 TORONTO – On October 10th, Consul-General of Japan in Toronto Yasunori Nakayama had a chance to introduce himself to some of Toronto’s community leaders at a packed reception held at his home on St. Clair Ave. West.

This is the first time he and wife, Chizuko Nakayama, have been to Canada, but both hope to learn the ropes of living in Ontario, although they admit they’re not looking forward to winter. However, they said some kindly Canadians have told them how to prepare.

“Before coming here, we have always been told of the kindness and openness of the people of Canada,” Nakayama said. “We are feeling overwhelmed to have experienced this aspect of Canada first hand.”

“This is our first time in Canada,” he said. “This may sound like a matter of course to many of you, but for the vast majority of the Japanese people, including me, who are told very little of the history of Canada in school, it is an eye-opener.”

Nakayama hopes to use his time here to learn about Canadian history and more about Canada in general, but he also hopes to expose more Canadians to Japanese culture. Although he says he’s fond of traditional Japanese culture like Kabuki theatre, he mentions that his wife hopes to give Canadians a taste of what Japan’s pop culture has to offer.

“My wife feels that Japanese pop culture such as food, film, anime, and manga could be more appealing to young Canadians,” he said. “I would look to do my part to show just how cool traditional and contemporary Japan can be.”

He also wants to use his experience in Japan’s Ministry of Finance to help support Japan’s businesses here in Canada, and vice-versa.

“Japanese businesses in Ontario are achieving great success in their respective fields in particular Japanese manufacturers along with their support industries are contributing greatly to Ontario’s employment,” he said. “I would like to redouble my efforts in supporting the activities of Japanese businesses in Canada.”

A number of Toronto’s political and cultural members were on-hand for the night wishing the new Consul-General the best in his activities.

Japan has consulates across the world (over 60 in various cities) and each Consul-General stays in the position for up to 3 years.