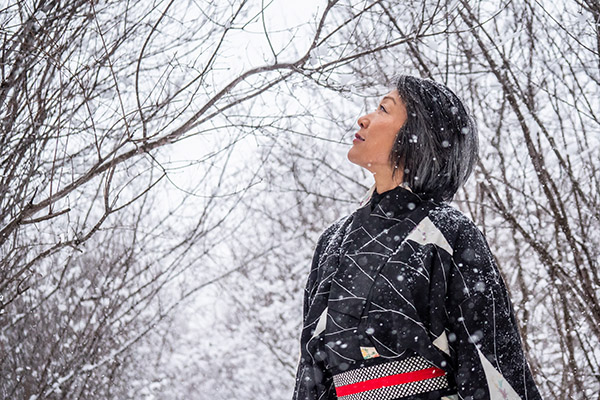 OTTAWA — Dancer, choreographer, and teacher Takako Segawa explores the potentials of expanding Japanese culture and art through her work in contemporary dance.

Segawa explores and plays with traditional Japanese art forms such as taiko, kabuki, and Japanese theatre through the lens of contemporary dance and the freedom, individuality, and movement within it.

“I feel that my calling as a dance creator is to look at our cultural traditions through fresh eyes and see if we can breathe new life into them so that they continue to thrive,” Segawa tells Nikkei Voice in an interview.

In her current project, Echoes: Vibrations from Japan to Canada, Segawa investigates identity, history, and culture through the concept of echoes. She proposes that her history is an echo of her ancestors and the Japanese Canadians who came before her to this country, whose voices and actions still reverberate today. She also reflects on the echo she creates through actions and decisions that have led her to this moment in time.

“The theme echo is inspired from the theory that even the smallest flutter of a butterfly’s wing ripples around the world to make global change,” she says.

Echoes is a three-minute video presented in the National Arts Centre series, Capsule. Running until Aug. 31, the series showcases the work Canadian dance artists have created despite the challenges of the pandemic in short videos. The three-minute video is just a part of the 60-minute piece Segawa is currently working on with assistant director Donna Woods of IDEASIGN. Three original taiko scores, composed by Thor Simonsen of Hitmakerz and performed by Tomomi Sakajiri and Yurika Murakami of Ottawa taiko group, Oto-Wa Taiko, were created for the piece.

To practice, they had to adapt to the restrictions in place from the pandemic, like studio closures, cancelled practice, and school closures for Segawa’s kindergarten-aged son. Both Sakajiri and Murakami work from home full time and made themselves available on weekends and evenings to practice.

“We rehearsed via Zoom from the beginning and practiced together in the park when restrictions were lifted. And when the studio was allowed to open for a short time, I grabbed the opportunity to rehearse and film in the studio,” Segawa says. “That was hectic and stressful for me, but we did it.”

Dressed in an altered kimono, and performing in the snow and the studio, Segawa effortlessly flows and responds to the reverberating sounds of the taiko. In Echoes Segawa fully embraces her Japanese culture through her dance, but this exploration was initially something she tried to push away in her early career. 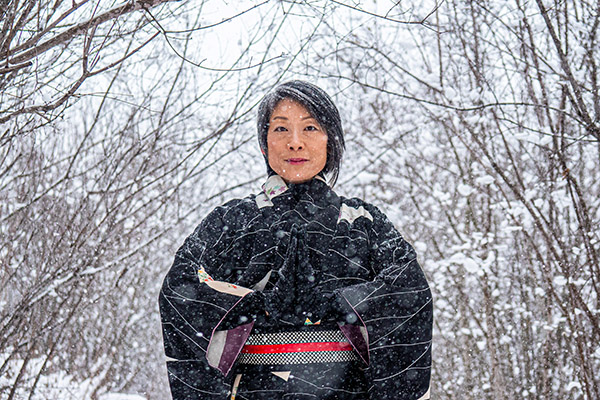 Segawa grew up immersed in movement and rhythm, starting dance and gymnastics at six years old. Her mother, an Olympic-level gymnast and later an aerobics and gymnastics instructor, would often bring Segawa to the studio where she worked. When Segawa was 16, she spent a life-changing summer studying contemporary dance in New York City. As a teenager in Japan, she often felt out of place and restricted by dance that was more focused on form than feeling.

“I just loved the freedom, and I never felt that before in Japan. The study of dance felt more exciting in the West in a way it hadn’t been in Japan up until that point. So I made up my mind to move to the West one day.”

After graduating from university, Segawa’s dream came true when she was accepted into the London Contemporary Dance School in England. She spent eight years working with various dance companies in Europe.

In Europe, she was often the only dancer of Asian descent. A choreographer asked her to speak Japanese for a piece, and a company director asked her if she could do butoh, despite her Western dance training and contemporary style.

“I was shocked. Can’t you see me as a contemporary dancer, not as an Asian dancer?” she says. “At that time, I was focused on being an equal member of the contemporary dance community and proving my worth as a dancer.”

Segawa’s 20-year dance career has taken her across Europe, North America, and Japan. Most influential was the four years Segawa spent in Greece, where she met her two mentors, Snjezana Premus of Slovenia and Maxine Heppner, a Toronto choreographer, and performer. Segawa performed Heppner’s dance piece, Moments in Time, in 2008, and again in 2015, for which she won the Dora Moore Award for Most Outstanding Female. Their work together has led to a 17-year friendship and collaboration as colleagues.

As Segawa gained confidence in her dance ability and creativity, she began to welcome Japanese art forms into her dance, something she always felt has been a part of her. Segawa’s mother came from a traditional family, so she was encouraged to study tea ceremony and ikebana as a young girl. She also studied form and movement through karate with her older brother, now a black belt.

Kochi, Segawa’s hometown in Japan, is known for the Yosakoi Festival, a three-day Japanese folk dance festival. Thousands of people gather to dance in vibrant costumes and parades across the city. Segawa spent her summers with her mother teaching community members the choreography, practicing for two hours every day leading up to the festival. Segawa taught Yosakoi in Ottawa before the pandemic, and expects classes to resume once it’s safe.

Segawa’s current dance project, Echoes: Vibrations from Japan to Canada, reflects the journey Segawa has made through her career as a dancer and choreographer. With the confidence to explore her Japanese roots in her dance, she now challenges herself to see how far she can explore and expand these traditional Japanese art forms.

“I help to bring the spirit of Japan to the West. I am an echo of Japan now that I am here in Canada,” says Segawa.

“Part of my heritage is belief in re-incarnation, and this soul was made to express itself through arts, wherever it comes from, and wherever it’s going in the future. So my job is to respect and honour the process of creating since it’s all greater than myself.”

“My hope is that the audience might be inspired to examine their own echoes and what energies and intentions we all put into our atmosphere.”


[…] Segawa is an Ottawa-based choreographer, dancer, and teacher who explores and expands the potential of Japanese art, traditions, and stories through contemporary dance. In her work, she draws on her Western contemporary dance background, which she combines with her training in traditional Japanese arts. Born in Kochi, Japan, Segawa has performed and worked in Europe, Asia, and North America. […]