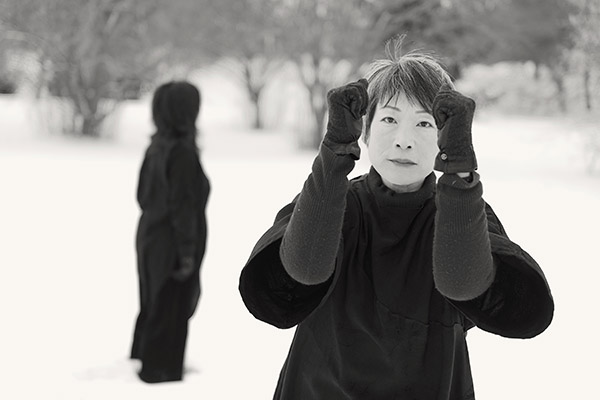 OTTAWA — Performed to haunting music and set in the melting, snowy landscape of Petawawa’s Heritage Village, contemporary dancer Takako Segawa‘s new dance film honours the legacy of the Japanese Canadians sent to the prisoner of war camps 80 years earlier. As a first-generation Japanese immigrant, Segawa pays tribute to the Japanese Canadians who arrived before her, the hardships they faced, and offers healing in her own way.

Called Sho ga nai – It can’t be helped, Segawa was inspired by the use of the Japanese phrase sho ga nai or shikata ga nai regarding the forced uprooting, dispossession, and internment starting in 1942. Growing up in Japan, sho ga nai was a familiar phrase for Segawa, with a blend of stoicism and practicality that means “it is what it is.”

“Sho ga nai means that sometimes there are things that we cannot control,” Segawa tells Nikkei Voice in an interview. “When a young tree bends in the wind, it does not snap but lives to see another day. So there is great power in knowing when to give way to forces greater than ourselves.”

Segawa is an Ottawa-based choreographer, dancer, and teacher who explores and expands the potential of Japanese art, traditions, and stories through contemporary dance. In her work, she draws on her Western contemporary dance background, which she combines with her training in traditional Japanese arts. Born in Kochi, Japan, Segawa has performed and worked in Europe, Asia, and North America.

Sho ga nai – It can’t be helped was created with support from the Ontario Arts Council and is performed in the Petawawa Heritage Village. When researching Japanese Canadian history during the Second World War, Segawa learned about the approximately 700 Japanese Canadian men who were separated from their families and sent across the country to prisoner of war camps in Ontario. Segawa discovered that just a two-hour drive from her Ottawa home was one of the camps in Petawawa. 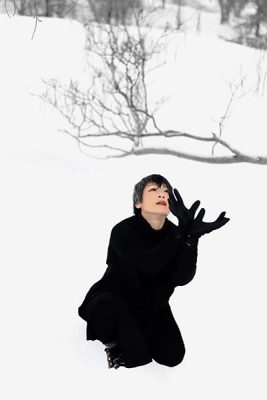 The heritage village is not the exact spot, but very close to where some Japanese Canadian men were likely interned in prisoner of war camps. Segawa uses the backdrop of the old heritage buildings, which look like stepping back in time, surrounded by woods, snow, and nature, to channel the spirits of her countrymen and pay homage to their experiences. The piece is told in four sections, categorized by emotion and tone. Each section begins with a historical photograph, which Segawa discovered while researching Japanese Canadian history.

Segawa’s dancing is accompanied by haunting music performed by another Japanese Canadian artist, soprano singer Noriko Hashimoto. Like Segawa, Hashimoto is a Japanese artist trained in a Western style. To create the chilling soundtrack of the dance film, Segawa encouraged Hashimoto to strip back her formal training, instead experimenting and exploring music with primitive sounds. Instead of singing a song with words and lyrics, Hashimoto sings disjointed notes, creating music that punctuates and emphasizes Segawa’s movements and leaves chills on viewers.

“I did not use words because they can go through the brain and be interpreted and pick up baggage in the process. So, I tried to strip [the music] back to basics; to allow the sounds to play with the movements. I think this can be more powerful than words,” explains Segawa.

This dance piece builds into Segawa’s work-in-progress, called Echoes: Vibrations from Japan to Canada, where she explores how the lives and actions of those who came before us continue to echo, like the vibrations of a taiko drum, through time and space, leading us to where we are today.

An exploration of identity, history, and culture, Segawa proposes that her history is an echo of her ancestors and the Japanese Canadians who came before her to this country, whose voices and actions still reverberate today. Segawa also reflects on the echo she creates herself, her actions and decisions each leading her to this moment in time.

“I feel the echoes from my people, from history, from nature, and even from the animals as they passed through, who stopped here for a while to live their lives,” says Segawa. “Ultimately, it feels like I am part of all people’s cells, whatever the origin, and that I am part of the history that brought us all here. It is very important to have this place to stand on. It feels like here the soul dwells.”

While those echoes reverberate through Segawa, they echo through the generations that follow, like that of her son. Now, Segawa lives, works, and is raising her son in Canada. By exploring this history, she wants her son to be proud to be Japanese and Canadian and to know the history of those who were here before him. Segawa hopes the dance film can acknowledge and honour the story of Japanese Canadians interned in prisoner of war camps in Ontario and offers it as a prayer or wish for healing.

“As a Japanese person who immigrated to Canada recently and now has a family here, I want to respect our history and feel and honour the people here before us who helped make our Japanese community strong. I want my son to be proud to be Japanese and Canadian,” says Segawa.

“I am grateful that Canada is multicultural and that we have so many wonderful Japanese institutions and extracurricular activities in our schools. I am also glad that my son is learning not only Japanese but English and French. Ultimately, my wish is for all people to feel liberated, valued, and accepted.”

THIS ARTICLE WAS REPRINTED FROM NIKKEI VOICE’S SEPTEMBER 2022 ISSUE. SUBSCRIBE OR DONATE TODAY TO HELP SUPPORT OUR NEWSPAPER.