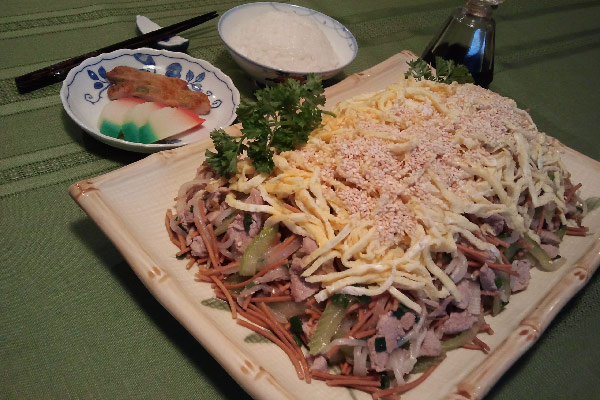 So many chow mein dishes are soggy, the meat has no flavour and the bean sprouts have a ‘green’ taste that turns many off.

In this recipe, the meat is infused with flavour from garlic, ginger and sugar. The vegetables, bean sprouts and mein noodles are crunchy and tasty.

It’s the cooking method that makes the difference. Cook quickly, use high heat, ‘lift’ the mixture during additions, and absolutely no ‘covering’ with lids. Do not add extras like mushrooms and other veggies that will only add extra moisture.

An egg topping looks very nice, but if you are in a hurry, the chow mein tastes just as good without egg. And a sprinkling of toasted sesame seeds gives it just the flavour accent that it needs.

A sprinkling of salt

1. Beat together in a bowl, eggs, sugar, and salt
2. Add oil to a non-stick frying pan. Fry half of the egg mixture, flip; then fry the remaining half and flip – can be fried in 3 lots for a thinner omelet
3. Lay on top of each other and slice thinly

1. Heat oil in a large pot over medium heat.
2. Add garlic and ginger slices, flipping to brown.
3. Remove garlic and ginger and discard.
4. Add pork strips to oil and turn heat to high. When pork is pink, sprinkle sugar and salt over pork, continue stirring until cooked. (If excess liquid collects, push the pork to sides of pan and allow liquid to boil off.)
5. Add celery and onions, and toss together.
6. Add bean sprouts, sprinkle with Ajinomoto and salt. Cook while quickly lifting and scattering ingredients within pot. Taste a sprout after 2 minutes – should not taste raw. Cook no longer than 3 minutes, but the time can depend on your stove
7. Remove pot from heat – this is important. Turn off stove.
8. Add thinly sliced green onions and toss mixture.
9. Add one pkg. of mein noodles and toss quickly using large chopsticks.

The majority of the liquid will be absorbed by the noodles.

Lay a thin layer of mein noodles (about 1/2 bag) onto a large platter, pour chow mein mixture over the noodles, sprinkle egg slices over mixture, leaving a border, and sprinkle on sesame seeds.

Serve with bowls of hot, white rice, and shoyu on the side. As well, include kamaboko.

Do you have a recipe you’d like to contribute, contact Nikkei Voice today and have your culinary creation appear in our newspaper. This recipe was featured in Nikkei Voice’s June issue.