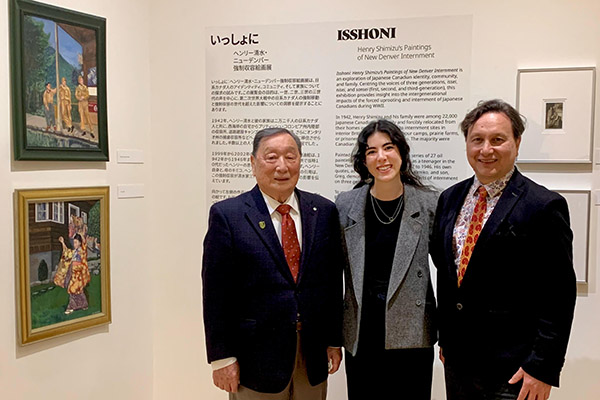 TORONTO — In 1999, after a gathering with friends reminiscing about their experiences during the Second World War, Dr. Henry Shimizu was inspired to create a series of paintings. Over the next three years, Henry painted Images of Internment, 27 oil paintings based on photographs from family and friends during their internment in New Denver.

Henry’s paintings reflect his bittersweet memories of New Denver and the internment era, expressing the life and experiences of a teenager and his friends growing up through a dark chapter in Canadian history. Based on real photographs from family and friends, the paintings capture snapshots of daily life in New Denver, from baseball games to dancing at Obon festivities or playing hockey on frozen ponds. 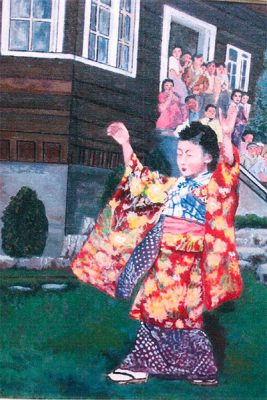 Henry was 14 when his family was uprooted and interned, first to Hastings Park and then to New Denver in 1942. After the war, the Shimizu family relocated to Edmonton. Henry studied at the University of Alberta and became one of Canada’s leading plastic surgeons and an Order of Canada recipient. He is an active member of the Japanese Canadian community, chairing the Japanese Canadian Redress Foundation from 1989 to 2001 and volunteering with the Victoria Nikkei Cultural Society. His series of paintings were first mounted in 2002 as part of the Images of Internment exhibition at the Edmonton Japanese Cultural Centre.

Henry’s paintings have been remounted in a new exhibition called Isshoni: Henry Shimizu’s Paintings of New Denver Internment at the University of Victoria Legacy Art Gallery Downtown until June 18.

“As a teenager growing up in New Denver, building lifelong friendships and surrounded by the Japanese Canadian community for the first time, Henry’s memories were quite different from his mother’s,” Marsh tells Nikkei Voice in an interview. “[Kimiko] had never left Japan before moving to Prince Rupert to marry Henry’s father, and experienced all the stressors of losing their family business, home, and belongings.”

The Shimizus’ voices are present in the exhibit through direct quotes printed on the gallery walls, taken from Marsh’s interviews with Henry and Greg. During the research process, Henry’s wife Joan shared an essay written by a family friend in 1992, which contained quotes from Kimiko. 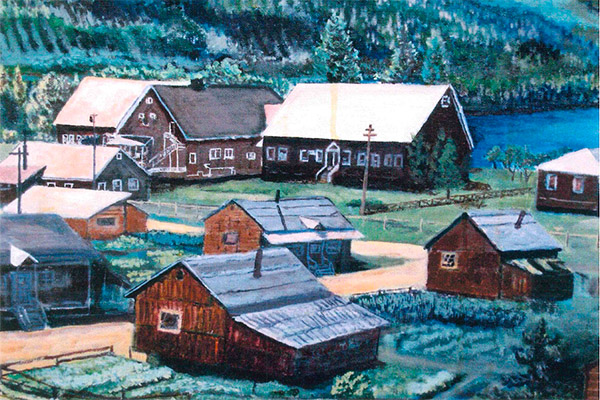 In this rare resource, Marsh read Kimiko’s firsthand recollections of her internment experience, such as when she first saw the 1942 Order-in-Council notice. In the interview, Kimiko says, “I didn’t think of myself, but what the future held for my children, their education, their ambitions.”

Despite experiencing the loss of their businesses and livelihoods and facing uncertain futures, the Issei created small joys and positive experiences for their children. Through these varying personal perspectives, Marsh explores internment as not only a historical event to be recounted but as an ongoing point of reconciliation and reflection.

By exploring Henry’s teenage perspective, Marsh also hopes young people, like university students and Yonsei and Gosei visitors, can find connections to their own lives. Especially Japanese Canadians who cannot hear their own families’ stories about their internment experience.

“I think every perspective of internment is extremely important to listen to and be able to pass on to future generations. For those learning about internment, having those personal memories can bridge a teenager’s experience today with what it looked like growing up during internment,” says Marsh. “We can draw connections and question how easy it was for these government bodies to alienate and dispossess a whole community that was vibrant and showed no signs of what they claimed was a threat to national security.”

The remounting of this exhibition is an act of reconciliation in itself. The last time the paintings were exhibited, in 2012, a painting was stolen right off a gallery wall and never seen again. Following the theft, the university closed the exhibit, quietly took down the paintings, and put them in storage, where they stayed for the next decade. In 2020, researcher and retired professor John Price, who has a long history of working with social justice movements in the Japanese Canadian community, urged the university to rectify the 10-year-old incident in response to current anti-racism movements throughout North America.

The university dedicated funding to hire a curator and after talks with Henry and Joan, focused hiring on a young Japanese Canadian artist. The university gallery hired Marsh, a mixed-race Yonsei cultural worker and independent curator based in Vancouver, currently working with the Powell Street Festival Society. With a background in anthropology and a master’s in museum studies from the University of Glasgow, Marsh is dedicated to making art and culture engaging, relevant, and accessible for underrepresented communities. 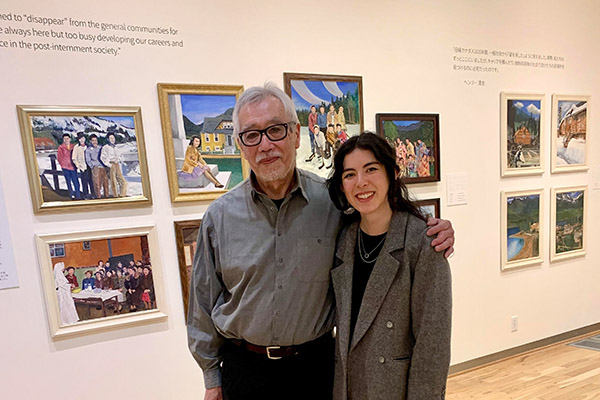 The university also dedicated funding to support mentorship from an established Japanese Canadian artist. Bryce Kanbara, an artist, activist, and proprietor of you me gallery in Hamilton, had just received the 2021 Governor General’s arts award and was chosen as a mentor.

Along with guiding the writing and editing of the exhibition, Kanbara’s previous work in Japanese Canadian history and identity was a source of inspiration for the questions she wanted to explore in this exhibition, says Marsh. Kanbara also encouraged Marsh to explore her own identity as an artist.

“I’ve always thought from my education that I would only have the tools or accreditations to curate work, but never call myself an artist. I think Bryce really questioned me on what it means to be a curator and to be an artist,” says Marsh. “It’s ways of connecting you to the community that doesn’t necessarily mean you have to be faced with this daunting task of creating a visual art; it can also be performance-based or research-based.”

Marsh also leaned on her past work in the Japanese Canadian community, like creating cultural programming for the Powell Street Festival Society. Coming from a community organization that has used Japanese Canadian history to advocate for other displaced communities was a guiding force in creating this exhibit. Art is a powerful tool to explore difficult themes, explains Marsh. It resonates in a way that words sometimes cannot and has the power to leave lasting connections. 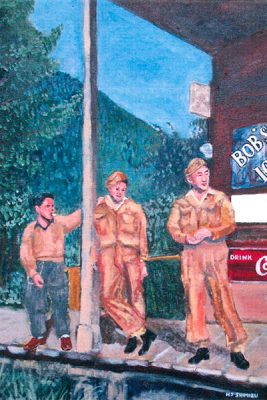 “Finding ways to make Japanese Canadian art and culture a force for social good was at the forefront of my mind as I wanted to present these works,” says Marsh. “It’s easy to look back on history and think, how could these atrocities happen, and how can we make sure they don’t happen again. But the systems of racism and oppression that existed then are still happening today to communities of minority, of different sexual orientation, accessibility, religion, and socioeconomic status. We need to be ever vigilant that we have the power to stand up and fight.”

The exhibition, presented in English and Japanese, encourages viewers to dig deeper and ask questions about Japanese Canadian history and internment. For visitors who want to learn more, Marsh designed a pamphlet with the personal stories of the Shimizu’s. It also directs visitors to the Nikkei Memorial Internment Centre on the former New Denver site.

“I wanted to allow the visitor to make those connections and find—whatever their heritage might be—connections between their background and the Japanese Canadian community’s background.”

Curating an exhibition with close ties to Marsh’s family story has led to further exploration into her own Nikkei identity and maternal Japanese American grandparents’ wartime experiences. In Idaho, her grandmother’s family had their assets seized, denied access to their banking, and had to transfer their business to a friend to save it. Marsh’s grandfather came from Hawaii and to the mainland for schooling, where he faced racism from the general population but also within the Japanese American community because he spoke differently and had a darker complexion.

Marsh is still working on uncovering and understanding these stories in her own family. She hopes this exhibition can be a jumping-off point for visitors to have conversations with their families and investigate their relationship with their own identities.

“It only reinforces for me how generous the Shimizu family has been in talking about these challenging topics because I think for my own family, we have a lot of healing still to do, and that’s true for so many others,” says Marsh. “There’s so much that needs to be shared, explored, and preserved for future generations. I’m just a small piece of that. I’m just really grateful for those who came before me, and I know there will be so many people after me.”

Watch the Landowne Lecture with Bryce Kanbara during the exhibit opening night, Japanese Canadians in the arts: “Did you think it’d come true?” below.