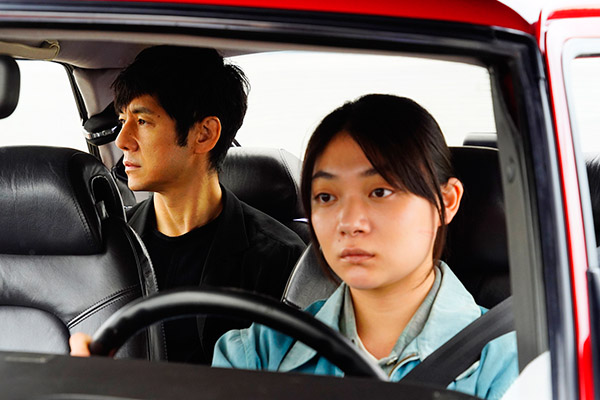 
Hidetoshi Nishijima as Yusuke Kafuku and Toko Miura as Misaki Watari in the four-time Oscar-nominated film, Drive My Car.

The film follows Yusuke Kafuku, a renowned stage actor and director set to direct a theatre production of Russian playwright Anton Chekhov’s Uncle Vanya at a Hiroshima festival. Kafuku sets off to Hiroshima in his beloved red Saab 900 with recordings of the play read by his late wife, Oto. Choosing lodging far from the theatre, he plans to listen to the tapes alone as he travels to and from the theatre each day. These plans derail when he finds out the festival will not let him drive his car due to a liability issue. Instead, the festival has assigned him a chauffeur, Misaki, a young, quiet woman with a dark past clouding her.

As the premiere date approaches, tensions grow between Kafuku and his cast and crew, including the play’s lead, a young actor named Koji Takatsuki, who has an uncomfortable connection to Kafuku’s late wife. As these tensions grow, so does Kafuku’s friendship with Misaki. The Saab increasingly functions as a confessional booth for the two, and Kafuku begins to confront uncomfortable truths and mysteries left behind by his wife.

Directed by Hamaguchi and co-written with Takamasa Oe, Drive My Car is based on a short story by critically acclaimed author Haruki Murakami in the collection Men Without Women.

The film continues to play in cinemas around the country and the world. Drive My Car will be screening at the Japanese Canadian Cultural Centre on March 6 at 1 p.m. In preparation, the JCCC interviewed and pre-recorded a Q&A with the director Hamaguchi, which will screen with film. It will soon be on the JCCC website. Here is the content of that conversation. 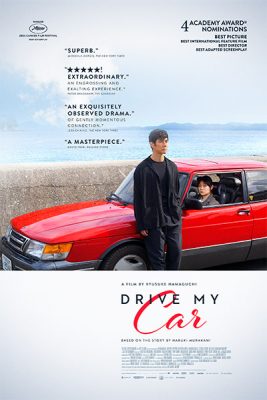 The film poster for Drive My Car. Photo courtesy: Films We Like.

JCCC: Why did you choose Murakami’s short story as your source material?

Ryusuke Hamaguchi: Originally, the idea to adapt a Murakami short story into a film came from the producer. He was Yamamoto-san, the producer of Asako I & II. He suggested a different story which I found a bit difficult, so I re-suggested Drive My Car, which I read in a magazine eight years ago and liked, so we ultimately chose this story.

JCCC: The film has been nominated for four Academy Awards and has found its way on “best of the year” lists around the world. Why do you think the film has had such an international appeal?

RH: Basically, it was the power of Murakami’s story itself, which I felt was universal. I liked the relationship between Kafuku and Misaki in the short story; they are neither family, friends, nor lovers, and for that reason, their spiritual connection forms. I believe that these kinds of spiritual connections can be understood universally. I tried to expand that aspect of the story while remaining true to Murakami’s world. I think my approach was accepted. Having said this, it wasn’t easy, but the actors truly absorbed Murakami’s world and were skilfully able to bring it to life.

JCCC: I have read that your rehearsal process—like director Kafuku-san in the film—involves having the actors read the [script] without emotion to internalize the text. Are there other parallels between you and the character?

RH: Essentially, that is where the parallel ends. In the original story, Kafuku is an actor, so that’s very different from me. For the movie, it was more convenient to make his character a director. He is invited to an international theatre festival, and an actor, Takatsuki, joins his company, and the story unfolds. These outcomes invoke the audience’s emotions.

Making Kafuku the director lets me direct the film more realistically, and it allows me to include my own workshop style into the film. I make actors repeatedly read the script without injecting emotion, so they completely absorb it. But when we film, the actors are free to express their own feelings. I thought even if Kafuku employs the same method, it would not be strange. So that’s why I showed my method in my film. I drew this parallel to make it easier to understand Kafuku, but basically, we are different. 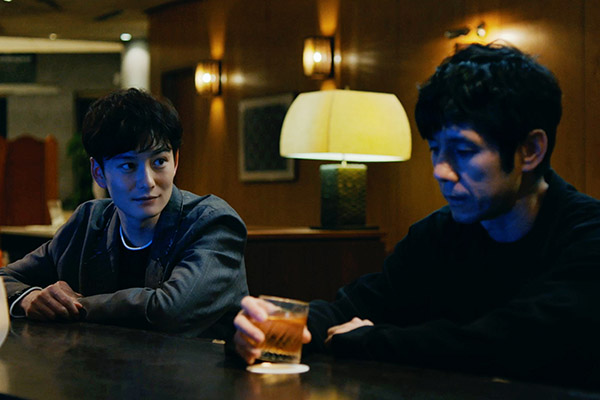 Masaki Okada as Koji Takatsuki and Hidetoshi Nishijima as Yusuke Kafuku in Drive My Car.

JCCC: You mix languages here, English, Mandarin, Japanese, and most powerfully, Korean sign language. What does this choice bring to the narrative?

RH: It can be risky to deal with a theatrical play in a film. But in the original story, Kafuku is described as an actor. I thought it was important to depict a theatrical play, to provide a solid reality to my film. It was also important to show the theatre scenes in a way that the audience doesn’t feel out of place. Theatrical performances tend to be exaggerated because it has to reach every part of the theatre, especially the back seats. But on screen, it can look excessive.

To avoid this, we shift the performance away from the audience; the actors have to perform in relation to their fellow actors. They need to only react to their co-actor’s performance. In this multiple language situation, actors don’t understand the others’ languages.

However, if they repeat reading the script in workshops, the sound, and its meaning match, so they can perform. However, they have to watch and listen to the co-actor carefully, otherwise, they can’t react. This extraordinary concentration evokes more natural physical reactions. I believe this is important. It has to present theatre not as “theatre” but as theatre suited to be seen on film. The actors gave powerful performances for this “theatre in a film.”

JCCC: Chekhov figures largely in the film. Can you speak to those influences, particularly on the characters of Kafuku and Misaki?

RH: Chekhov’s Uncle Vanya is in Murakami’s original story as well, in the scene of Kafuku practicing his Vanya’s parts in a car. It wasn’t a big part and lasted only for a few seconds.

When I had to choose a play, Uncle Vanya was a natural choice, as it was in the original story. When I read Uncle Vanya again, I found many of Vanya’s lines can be read as Kafuku’s feelings. Kafuku is not the type of person who talks a lot about himself. So without using his monologues in the film, I used Vanya’s lines boldly so that the audience could imagine his thoughts. As I read on, I realized that like Kafuku and Vanya, Misaki aligns with Sonya. Lines in Murakami’s story support this idea. The worlds of Uncle Vanya and Drive My Car translate each other, and each expands the other’s meanings. That’s how I wanted to build my script when I wrote it. 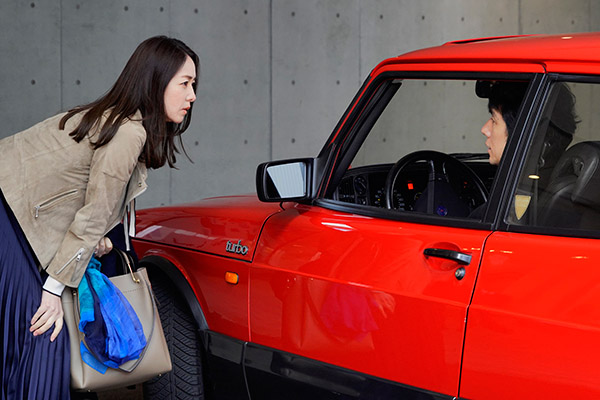 Reika Kirishima as Oto Kafuku and Hidetoshi Nishijima as Yusuke Kafuku in Drive My Car. Photo courtesy: Films We Like.

JCCC: You released two films in 2021, and between them, they tell four stories. Your other film, Wheel Of Fortune and Fantasy, is a tryptic telling three stories of approximately 40 minutes each. Drive My Car tells one story over three hours. Both films have received much critical acclaim. Can you tell us about the differing approaches to these stories and why you chose to tell them the way you did?

RH: Wheel of Fortune and Fantasy started as a personal independent project and was made mostly around the same time as Drive My Car. So I believe these two films correspond in terms of context and theme. For me, Wheel of Fortune and Fantasy served as a preparatory exercise before going into a large-scale production like Drive My Car, something I had never made before.

A short film is obviously easier for me to start. As a result, I ended up going back and forth between the two. As for the film length, it still challenges me. A story should end naturally when the character’s problem is solved but must stay consistent with their behavioural principles or personalities. It varies each time.

In my three short stories, the characters found resolution in about 40 minutes. On the other hand, in Drive My Car, neither Kafuku nor Misaki can easily talk about themselves. But both carry great sorrow and distress in their hearts. So, it required a lot of time for them to talk about themselves and timidly find out their similarities.

My issue about film length will continue to be a problem to be solved. I am very appreciative that my producers of each film allowed me to make the films freely in their suitable lengths.

Watch the trailer for Drive My Car below: