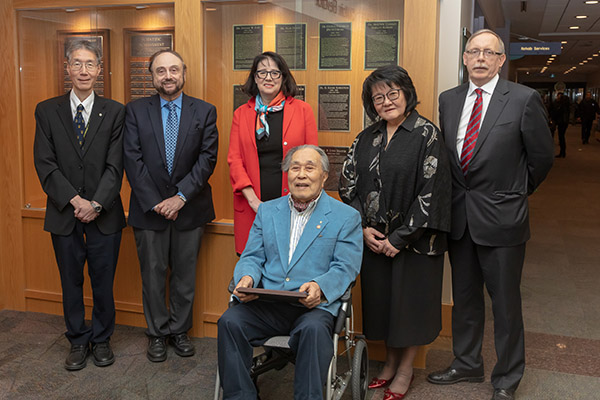 TORONTO — On January 31, Dr. Juhn Wada, 94, was inducted into the Hall of Honour at the Vancouver General Hospital and its health authority, in a ceremony attended by his family, friends and colleagues and the Honourable Janet Austin, Lieutenant Governor of the Province of British Columbia.

Dr. Wada was born in 1924 in Tokyo, graduated from the Hokkaido University’s medical school in 1946 and became a Canadian citizen in 1961. Until his retirement in 1994, he was one of the most accomplished neurologists in Canada and a world expert in seizure disorders (epilepsy). The neurologic diagnostic test that Dr. Wada developed, known internationally as the “Wada Test” was so well recognized that it was mentioned in the American television show, Grey’s Anatomy.

Dr. Wada’s contribution to medical science included the publication of 323 peer review papers in the area of neurology and epilepsy.  His contributions to medical education, aside from the many hours spent teaching undergraduate medical students and post-graduate residents/fellows, include the publication of 11 medical books. Dr. Wada’s service to the profession included appointments as the founding President of the Canadian League Against Epilepsy (1977 to 1979), President of the American Clinical Neurophysiology Society (1985) and President of the American Epilepsy Society (1989).

During his career, Dr. Wada was honoured by his medical peers with numerous awards and merits, including the Herbert Jasper Award, the William G. Lennox Award and the Lifetime Achievement Awards from the International League Against Epilepsy and International Bureau for Epilepsy.

Dr. Wada was also the recipient of the highest honours of both Canada and Japan: he was named an Officer of the Order of Canada (OC) in 1992, received the Queen Elizabeth II Diamond Jubilee Medal in 2012  and received the Order of the Sacred Treasure from the Emperor and Empress of Japan in 1996. Currently Dr. Wada is a Professor Emeritus of the University of British Columbia.

The VCH Hall of Honour was created by the Medical and Dental Staff Association to honour the health care providers of the Vancouver General Hospital (founded in 1916) and its affiliated institutions UBC Hospital and G.F. Strong Rehabilitation Centre. The Medical and Dental Staff Association has 2,000 members of whom 954 are active full-time members.

Induction into the Hall of Honour is considered the highest honour a member of the Medical and Dental Staff can receive. The other 2019 Hall of Honour inductees were: Dr. B. Lynn Beatie (Geriatrics), the late Dr. H. Joachim Burhenne (Radiology), Dr. Stephen M. Drance OC (Ophthalmology) and the late Dr. H. Rocke Robertson CC (Surgery).