Dubbed vs. Subbed and a Quick Look at Castle in the Sky 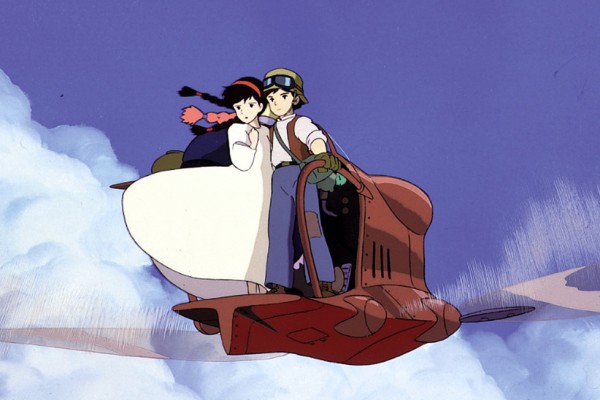 Last night as I watched Hayao Miyazaki’s Castle in the Sky for the first time, one eternal debate was all I could think about.

Like Truth versus Lies, Pepsi versus Coke, and Tomato versus Tomato, Dubbed versus Subbed is an everlasting debate for anime lovers around the world.

Is a film that much worse when the original voice cast is replaced by English actors? With the likes of Mark Hamill (who played the Joker in the Batman animated series… and Luke Skywalker in Star Wars), Anna Paquin, James Van Der Beek, and Cloris Leachman it’s a star studded cast (sort of) with some decent voice acting.

Is what anime purists ask for too much? Should theatres like Toronto’s TIFF Light Box offer up headphones for people wanting a specific voice track?

What’s interesting for me as a long-time watcher of Studio Ghibli’s films is that I’ve grown up, more or less, used to the English casts of most films. For example, when watching Totoro on a VHS tape as a child the only option was to listen to the North American cast. When I watched the film for the first time in Japanese a few months ago it felt odd.

What this debate really comes down to is how well the language fits into the film. There are too many examples of bad dubbing in anime, but Castle in the Sky was an exception.

Castle in the Sky was the first film produced and directed wholly by Studio Ghibli talent, and it tells the story of a young girl named Sheeta who attempts to uncover a secret floating land.

As she travels – kidnapped, no less – on a floating fortress, Sheeta suddenly finds herself face-to-face with a fearsome group of sky pirates that want to capture her. Hitting her former captor with a bottle to escape her new captors, she climbs out of the air ship’s window, slips, and plummets.

Back on Earth, a young boy named Pazu is on his way to work when he spots something glowing falling from the sky. Running over some scaffolding towards the light, he sees a girl. As she slowly falls, he picks her up, covers her with his vest, and takes her home. When she awakes they discover the similarities between them and their mutual interest in a floating island called Laputa.

Laputa represents the dangers of military technology. A highly advanced civilization, the Laputians floating city is the equivalent of a battle fortress capable of immense destruction. It’s for this reason many of the bad guys in the film want to find the city, but the exact reason why Sheeta and Pazu struggle to get there in the first place.

As the younger generation, they understand how destructive war can be not unlike younger generations in Japan who have learned how devastating the attacks on Hiroshima and Nagasaki were. This pacifying message comes in the form of nature taking over Laputa rendering most of its technology useless. While the weapons may still exist, humanity can still live in harmony with nature.

However, it turns out Sheeta is the key to unlocking Laputa’s power.

Watching Castle in the Sky for the first time was great. Whether it was dubbed or subbed, seeing it on the big screen made the film all the more powerful with its message of coexistence and peace.


I honestly have never understood HOW purists could possibly hate the Disney dubs of Miyazaki’s movies. Even if they do take some liberties with the scripts, at least they do so to make the movies workable for audiences, and not at all haphazardly. Plus the voice acting in their dubs have never really been bad; otherwise Miyazaki would haven’t allowed them to be released. Honestly, I DID watch this one time in Japanese and strangely, I prefer the dub. Why? Because I think it’s cooler to hear evil Luke as a badguy, especially since the role in question is perfect for him. There really SHOULD be no issues when it comes to determining which dub is better or worse; it should be up to the individual.


It certainly is awesome to hear the Joker’s voice as the bad guy in the film, but dubbed versus subbed is a big deal for a lot of people and not only purists. I think a lot of people move over to subtitles because they want to learn the language a little. It helps watching the actions of the characters and relating them to the words that their saying. Then going to a dictionary or taking classes, you can actually learn a little Japanese while watching your favourite Ghibli film. It becomes a more cultured experience even if in a small way; however, there are some great dubbing studios like Funimation that simply want to give an anime more accessibility outside of Japan. That I understand and applaud.