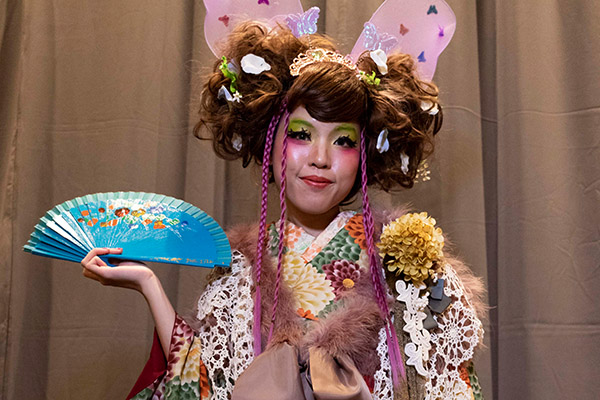 One of the models at the Kimono Fashion Show, hosted by Kimono Bijin at Anime North on May 25. Photo credit: Scott Luk.

TORONTO — Every year thousands of anime and video game fans flock to Anime North to dress as their favourite characters, buy memorabilia and see featured guests talk and perform.

Anime North is Toronto’s premier anime convention, held annually at the Toronto Congress Centre. This year was no exception and the ever-growing love of anime has subsequently led to growing love of Japanese culture. Within the crowd of cosplayers were a number of visitors dressed in kimonos, obi, and geta.

Kimono designer Mamechiyo Modern and hair and make up artist Mieko Ueda, took part in the convention’s annual fashion show. Kimono social networking site, Kimono Bijin invited the pair from Japan, to show the best Japanese fashion has to offer. Their participation is a prime example of the growing Japanese cultural influence in Canada.

Inspired by the theme “Princesses in Virtual Worlds,” the artists designed eight one-of-a-kind kimonos and hair styles exclusively for the fashion show, hosted by Kimono Bijin. Kimono Bijin is a social networking site that connects fans of Japanese culture, such as kimono, tea ceremony, ikebana and calligraphy around the world. 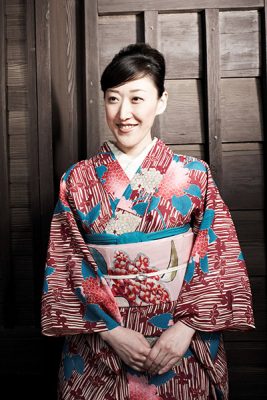 Afterwards, the two took part in a Q&A panel, and dissected the hair and make up and the inspiration and work put into creating the kimonos from the show. Mamechiyo Modern and Mieko Ueda are both renown for their success in creatively creating a Japanese East-meets-West style of fashion.

Mamechiyo Modern’s creations have led to a the resurgence of the kimono in the modern age, designing contemporary kimonos for daily use, not just for special occasions. Constructing kimonos made with special moisture-wicking fabrics, while still honouring the tradition, her designs have brought a modern twist on traditional kimono.

Mamechiyo’s kimonos have received praise and awards from print and television media, as well as being permanent features in Victoria and Albert Museum in London and the Van Gogh Museum in Amsterdam. Her kimonos are being adopted by a younger Japanese generation, from pop stars to voice actors.

Mieko Ueda’s work is as influential as it is unique. She has worked as a beauty director for Shiseido Japan, and for numerous fashion shows around the world. Her achievements include establishing the Shiseido Academy of Beauty & Fashion and the publication of her work throughout Asia and Europe. Ueda’s work has captured attention in Paris, the Netherlands, Switzerland and London, for merging Eastern and Western styles together into modern fashion. 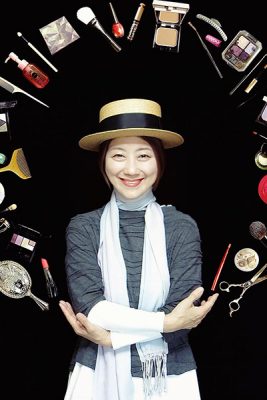 The pair of artists put on a show of a lifetime, imagining eight princesses from three different worlds, “Modern Princesses,” “Asians Princesses,” and the “Fantasy Princess.” Each princess was dressed and composed as elaborately as the last.

Mamechiyo’s kimonos were each beautifully designed, utilizing colourful fabrics and patterns, with a motif of the spring and summer seasons. Most of princesses were adorned flowers, butterflies, eye-catching patterns and bright colours. Opposingly, the “Fantasy Princess,” made  with only white fabric, featured lovely lace trim, making the kimono look like a wedding dress.

Ueda’s hair and make up stylings were just as elaborate as the kimonos, featuring bright colours and large elaborate hair pieces and accessories, that caught your attention and refused to let go until the next model took her place.

In the joint panel after the show, the designers answered questions from an audience of excited attendees. Ueda dissected of some of the models hairstyles and make up, revealing some tips for the audience, but also bringing attention to the amount of detail put into each model’s look, going as far as to show the attentive crowd the tiny butterflies glued onto the eye lashes of one of the models. Mamechiyo elaborated on the inspiration and the construction of her kimonos, with the “Fantasy Kimono” drawing much of the attention, as the more elaborate of the outfits. Sewn together from two separate kimonos, the outfit featured white lace trims around the arms and body, and swan wings mounted on the back with pastel-coloured butterflies along the bottom.

The pair had a tutorial panel on the last day of the convention, and with a crew of makeup artists, taught attendees how get that authentic Japanese style. Teaching the audience tips to achieve the same looks that they admired on stage, like how to properly wrap a kimono and tie an obi.

Mamechiyo and Mieko Ueda’s fashion show was a stellar success. Their work to bridge the gap between traditional Japanese fashion and modern Western fashion is a perfect example to the greater cultural adoption taking place throughout Canada. Their time at this year’s Anime North convention is just another step in the same direction that they’ve already been walking; bringing together Japanese and Western culture through fashion.

Check out all the looks from the Kimono Fashion Show in the slideshow below: 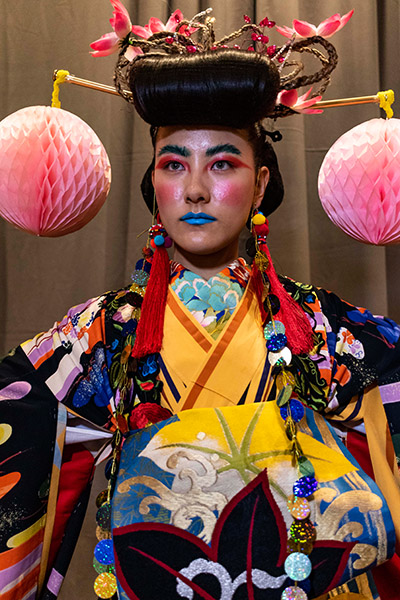 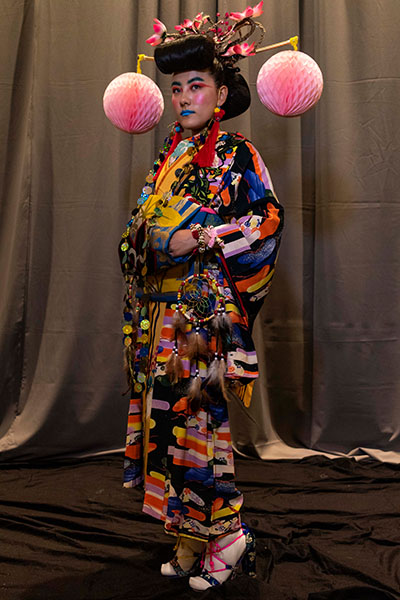 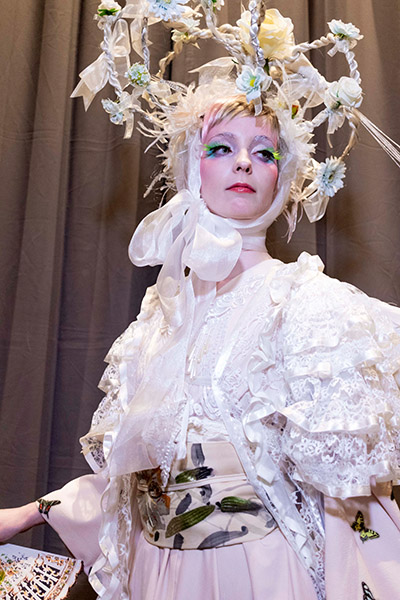 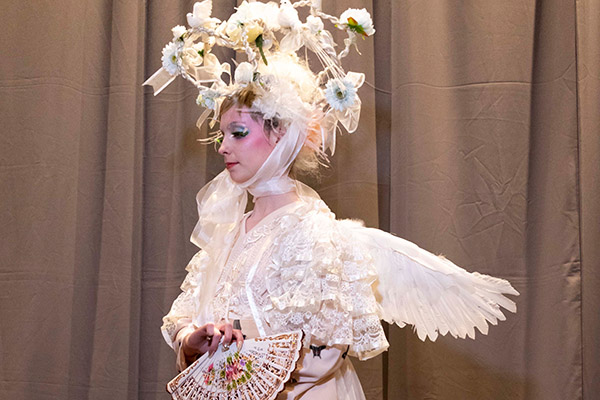 Kimono Fashion Show
This princess was adorned with butterflies, even on her eyelashes. Photo credit: Scott Luk. 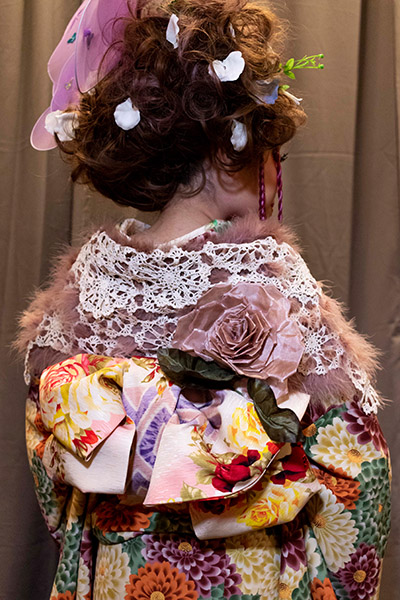 Obi
A closer look at the detail on the obi of this kimono. Photo credit: Scott Luk. 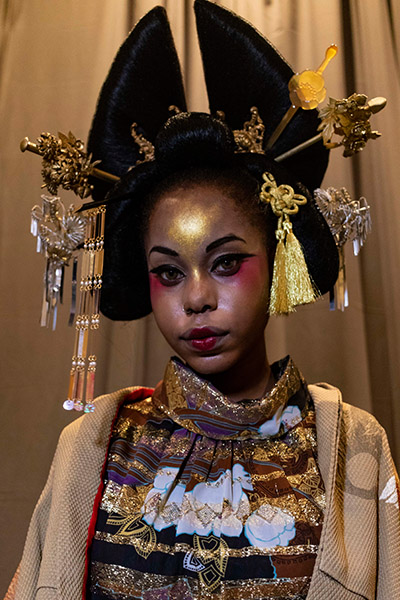 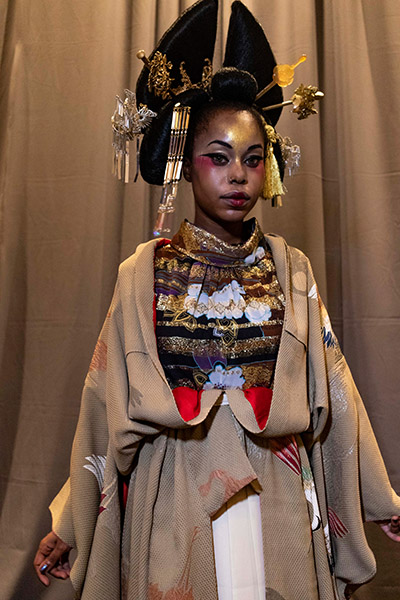