East meets West on the stage in ‘Kayoi Komachi/Komachi Visited’ 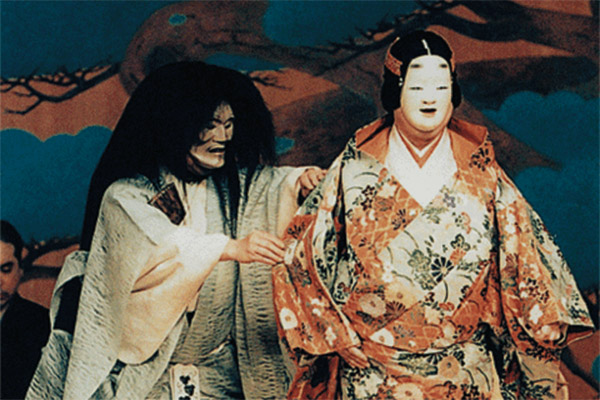 Instead what came of it was Kayoi Komachi/Komachi Visited, a heart wrenching story of unrequited love, that makes it’s world premiere Oct. 26 to 28 at The Cultch theatre in Vancouver.

The presentation brings together master performers of noh (a 14th century Japanese theatre art) including renowned noh artist Yamai Tsunao from Japan and Western classical performers from Vancouver together in a unique cultural marriage.

“Sometimes when people hear the words ‘new music’ they think, ‘uh, there’s not going to be a melody or its all going to be tonal and really horrible’,” Lanki tells the Nikkei Voice. “It’s not, there are certainly interesting tones and tonality created in this piece just because it is noh, which makes it a little different to the ear sometimes. But it is extremely accessible, the music is really beautiful.”

The story follows Ono-no-Komachi, one of Japan’s six highly celebrated poets who lived during the 9th century. She is haunted to death by the spirit of Fukakusa-no-Shosho, a man she rejected in life. She tells him she will love him if he sleeps outside her carriage for 100 nights and of course he dies on the 100th night and haunts Komachi to her own death.

Working with a translator that specializes in women’s medieval poetry, Lanki used translations of Komachi’s poems in the libretto to give the story authenticity and preserve the real Komachi’s voice.

The idea to combine the two cultures together came from award-winning Iranian composer Farshid Samandari, who was inspired by renowned noh artist Yamai Tsunao from the ancient Komparu school in Japan.

Putting together the production has been a four year project, says Samandari.

Noh can be a very abstract and introverted form of theatre, contrasted with Western opera, that is very extraverted, with lavish costumes and orchestras, and was a challenge to combine, says Samandari.

Much of Samandari’s work has been trying to mix and marry different cultural art forms together, like what Kayoi Komachi/Komachi Visited does.

“Maybe part of it is my personal belief in diversity, we need to be a bit more understanding of different cultures,” says Samandari.

Matching a noh actor with a soprano opera singer has never been done before, so Samandari composed his own music to tell the story of Ono-no-Komachi, and Lanki was approached to write the libretto.

Lanki has over 20 years of experience studying noh after falling in love with the art form while studying for her undergraduate at York University in Toronto. Lanki moved to Japan and learned under noh expert Richard Emmet and noh master Omura Sadamu.

The production is bringing three noh dancers from Japan to perform in Vancouver. Of those three dancers, two are women, which is rare for an artform that is normally dominated by men, says Lanki. The Komparu school they are working with is one of the few ancient schools that allow women to study.

“The women I’ve seen are mind-blowingly good,” says Lanki. “They have generally fought tooth and nail to prove they can do it, and they are really very, very good.”

Lanki and Samandari presented Kayoi Komachi/Komachi Visited in a workshop in 2016 that moved audiences to tears. After a year of perfecting and working with the Japanese and Vancouver artists, the performance is ready for its opening night at the end of this month.

Kayoi Komachi/Komachi Visited presented by TomoeArts runs from Oct. 26 to 28 at The Cultch theatre in Vancouver. For tickets and more information, visit: www.thecultch.com.