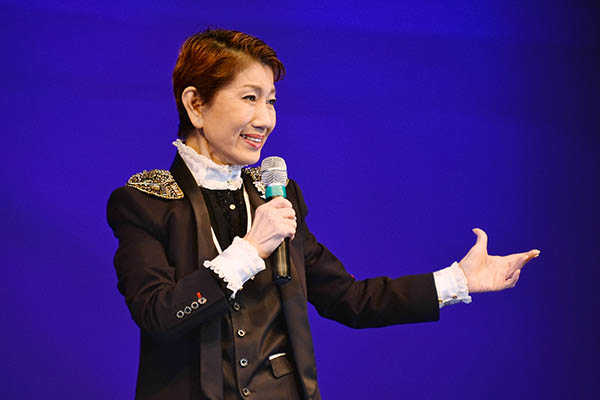 Suizenji is one of the most well-known Enka singers in Japan and widely known by her nickname, Chita. She performs regularly on the televised Kouhaku end of year celebration with NHK and performs around the world.

She has also found renewed popularity among younger generations after her songs were featured in Evangelion 2.0: You Can (Not) Advance, a popular animated film.

During an interview with Nikkei Voice, we asked what she’s looking forward to in the coming years and about the Japanese recording industry.

“Maybe, I will collapse,” Suizenji said jokingly. “But everyone has told me that they want me to aim for a 60th anniversary, so I will do my best.”

“I must admit, however, that CDs do not sell well these days,” she said. “It is okay even if you do not buy my CDs. Still, you can listen to my songs on TV and the Internet, for example. I appreciate if you do so and remember them.” 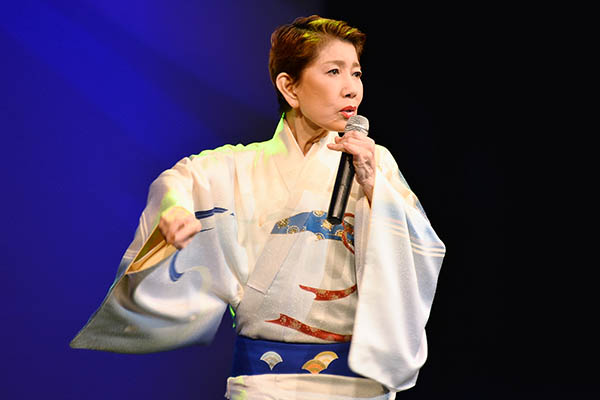 The concert kicked off with her song “The March of 365 Step”, which was featured in Evangelion. She also sang her debut song “A Migratory Bird Holding Tears”, her best-selling “The Song of Vajra”, and excited the audience when she sang “Life if but a Long Sob Story”.

Now 50 years into her career, Suizenji maintains the wonderful voice that has made her a household name in Japan. During the show, she also took some time to speak with her fans making them laugh with some humourous stories.

She also talked about her father who helped her find her voice and supported her throughout the early years of her career. In 1983, she learned that she would perform that year’s Kouhaku, an end of the year singing festival with Japanese Broadcasting (NHK).

At the time her father was sick and the broadcaster told her not to reveal that she was singing to anyone.

“If I had told him the truth, he would surely have been alive until the actual performance,” Suizenji said to the emotional crowd listening to her story.

Lastly, she sang “Spring Thunder” to which the audience responded with thunderous applause.

The sales of this concert were donated to the Japanese Social Services (JSS) and the Japanese Canadian Cultural Center (JCCC).