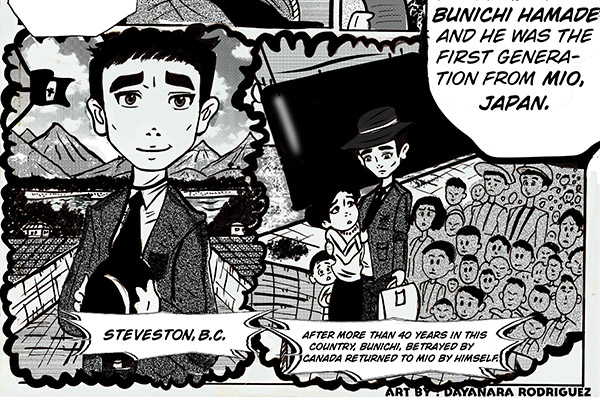 TORONTO — Manga artist Dayanara Rodriguez finds inspiration in nature and the people around her for her art, often drawing her friends, family, and coworkers. When Dayanara shared her artwork with a coworker at the Japanese Canadian Cultural Centre, he urged Dayanara to show her work publicly. He introduced her to the Heritage Department at the JCCC, which was looking for artists to collaborate with for their new exhibit.

“I’ve always [made] comics or manga stories about my friends—when I was in school—or my family,” Dayanara tells Nikkei Voice in an interview. “I always have my sketchbook everywhere I go.” 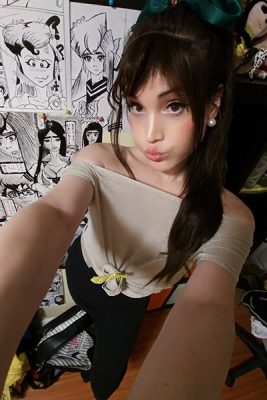 Dayanara grew up watching anime like Dragon Ball Z, Sailor Moon, and Naruto. After each episode, she would try to remember and recreate each scene in her sketchbook, teaching herself how to draw.

Originally from Colombia, Dayanara immigrated to Canada when she was 12. Anime and Japanese culture are popular in Latin America, explains Dayanara. While manga and anime tell stories ranging from heroes and royalty, to monsters and the supernatural, or regular school student dramas, at their core are often inspirational stories of characters overcoming hardships and challenges, which resonated with Dayanara.

These universal themes are also why these stories resonate across cultures, countries, and languages, she says.

“The stories in anime are really inspiring; never give up, just keep going, and that has been my life experience too,” she says. “I think Japanese people have no idea how much anime—and their stories and music—has inspired people and touched other cultures.”

This was Dayanara’s first public project and has sparked confidence and motivation to pursue more artistic projects. Dayanara is working on a manga she hopes to publish and designs clothing that combines her love of Japanese culture with her Latin heritage. 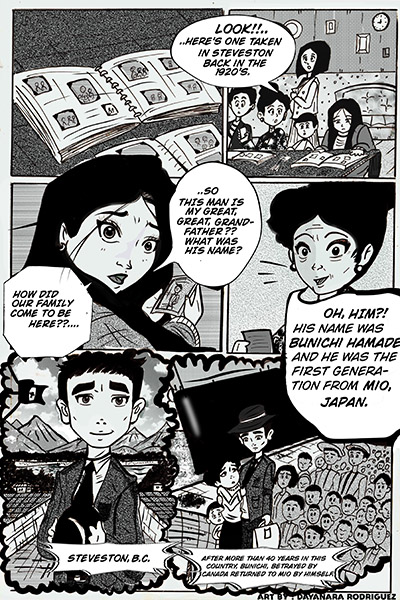 In Maru: Immigration Stories, Dayanara created three manga comics based on real stories of Nikkei’s immigration experiences. These stories were a Japanese picture bride coming to Canada to meet her husband for the first time, based on a JCCC board member’s grandparents; a grim battle between two Nikkei communities in Brazil at the end of the Second World War; and a fisherman immigrating from Mio, Japan to Steveston, B.C., based on Nikkei Voice editor’s great grandfather. 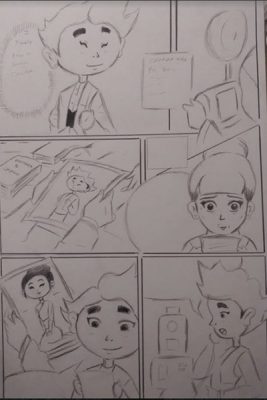 Dayanara worked with the exhibit’s curatorial team to illustrate concise comics, relying the on illustrations and dialogue to tell the stories. Based on interviews and photos provided by the subjects’ family members, Dayanara created cute and cartoonish characters to tell easily digestible stories. Dayanara captures depth and emotion in her characters’ faces, expressions, and bodies that effectively tell these stories.

Since the exhibit launched in September for private tours, visitors of all age ranges have positively responded to the manga, says Su Yen Chong, JCCC Heritage Manager and curatorial lead for Maru: Immigration Stories.

For visitors who have time to explore the exhibit, the manga was an enriching addition. For those who did not have a lot of time, the manga was a quick and fun way to learn stories of Nikkei communities, she says.

“By our first draft, we felt that Dayanara was not only an incredible artist, but she also has an uncanny ability to condense rich and complex stories to a format that is enjoyable to consume,” says Chong.

Dayanara is one of many artists that the JCCC plans to work with and learn from throughout the exhibit’s five-year run. Using art like Dayanara’s manga is a way to interactively connect to visitors beyond photos and text, especially for younger visitors. Dayanara also created illustrations to accompany an interactive display of Nikkei foods from across the Americas. 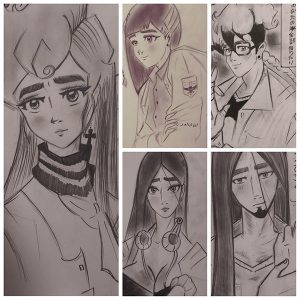 Some of Dayanara’s sketches. Photo courtesy of the artist.

“Obviously, academic research is vital to the exhibit, but through the creation of Maru: Immigration Stories, we learn the importance of expanding communal knowledge by enriching our exhibition experience through various mediums of expressions,” says Chong.

“Art is an important medium of interaction with our visitors that transcends cultural background, age, gender, and nationalities.”

Dayanara hopes the manga can spark curiosity about Japanese culture and history, like watching anime did for her as a child. She also hopes the manga will be a fun and approachable way for visitors from different backgrounds and cultures to find commonality in their family histories.

“Like me, when I started in anime, but I didn’t know too much about the deep stories of people who came here, how they struggled, it was a different world. For me, it was really inspiring,” says Dayanara.

“When [visitors] realize [the manga] is based on real-life events, maybe it will be more approachable, and maybe they can identify with the characters. I want them to get to know more about Japanese culture and history. It’s a good way to approach history with cartoons. It can spark curiosity, and [visitors] can feel more connected with their past and great grandparents and discover themselves.”

Book a tour for Maru: Immigration Stories or experience the virtual tour here.