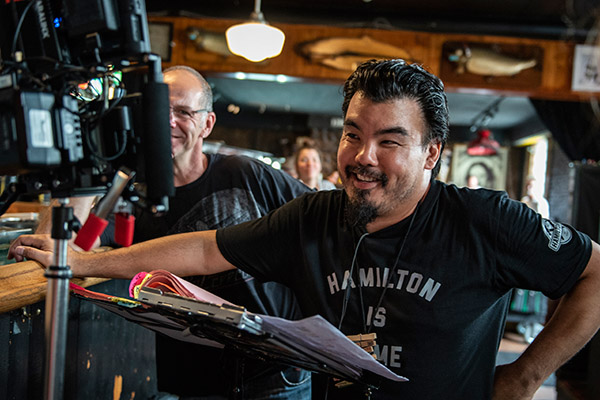 HALIFAX — With director Warren P. Sonoda‘s new film, Things I Do For Money, he wanted to create a thrilling, crime caper film. Peeling back a layer, the film became a way for Sonoda to examine his own cultural identity and tell a story about a Japanese Canadian family growing up in Hamilton that mirrored his own experiences. 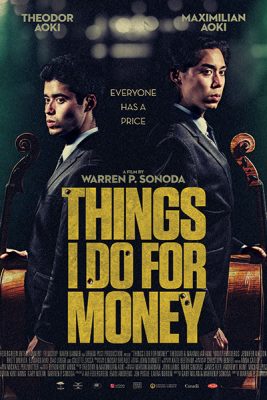 The film poster for Things I Do For Money.

“I personally haven’t seen a movie about a Japanese Canadian family made by a Japanese Canadian. That is the place I started from—even though my family doesn’t go around robbing priceless works of art from people,” Sonoda tells Nikkei Voice in an interview.

“Things I Do For Money is that next artistic expression for me as a director, to do something a little more personal, a little more in my world view and make something in my hometown of Hamilton, which is really important to me.”

The film had its world premiere at the Whistler Film Festival on Dec. 6.

Sonoda is one of Canada’s busiest directors. He has directed 11 films and 72 television shows, as well as over 160 music videos. A creator of Canadian content, his filmography includes Murdoch Mysteries and Trailer Park Boys. Sonoda was in Halifax, working on the Canadian comedy show, This Hour Has 22 Minutes, and caught up with Nikkei Voice in a phone interview.

Things I Do For Money follows two cello-playing Japanese Canadian brothers in Hamilton, Eli and Nick Yaguchi, who inadvertently get tied up in increasingly dangerous scenarios after taking a bag of money from a crime scene. At the centre of this film are real-life Yonsei Japanese Canadian brothers, Theodor and Maximilian Aoki. Sonoda connected with the Aoki brothers through the film’s co-writer, Gary Nolan. Nolan taught with the Aokis’ mother. The brothers are also gifted cellists, who have played various events in Hamilton and post videos online. 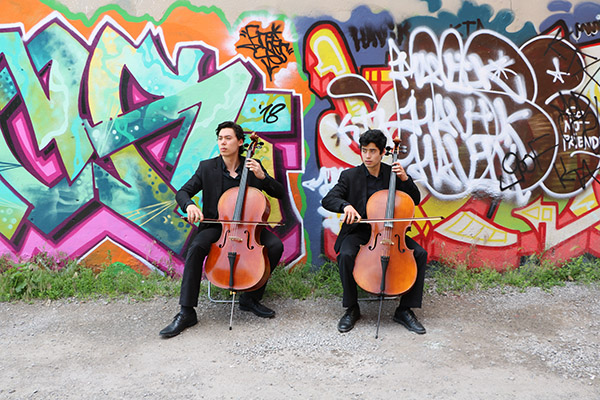 Max and Theo Aoki in Warren P. Sonoda’s new film, Things I Do For Money, shot in Hamilton, Ont.

After deciding to work with the Aoki brothers, it set off what Sonoda dubbed “the fast and furious summer of 2018.” The brothers were on a tight schedule, Max was returning and Theo was starting at McMaster University, both studying engineering.

“So I had this small window in the summer of 2018, where I had them for four weeks and they were willing to work their butts off and give me the time,” says Sonoda. “It was just up to me to get the team together, the money and the resources together to make it in that small window and everything sort of broke the right way, the way we needed it to.” 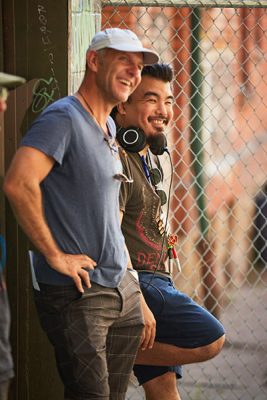 Sonoda, Nolan and their small crew set off to film an ambitious project. Over 13 days, they filmed a movie with 50 plus speaking parts, 140 plus background actors, in over 35 locations with half a dozen cello performances and five action scenes. On top of that, it was the Aoki brothers first time acting in a film, and that summer, Hamilton, like the rest of Southern Ontario, was going through a major heatwave.

“Here I have these two kids that have never been in a movie, and I’m making them run around and dodge bullets and play their hearts out,” says Sonoda. “And not just them, most of that cast had never been in a film before, never acted before, first time doing something like this.”

On top of that, the brothers were writing and composing the original score for the film, including the incredible central song of the film, Monument, which they play as a duet on their cellos during the action-packed finale of the film.

“When I sat down with them, the process was basically, this is the finale, I need something amazing,” says Sonoda. “They started pitching ideas to me and Gary, and we’d listen to it and give feedback, but the music in the movie is 100 per cent the Aoki brothers, it’s their heart and soul and their talent.” 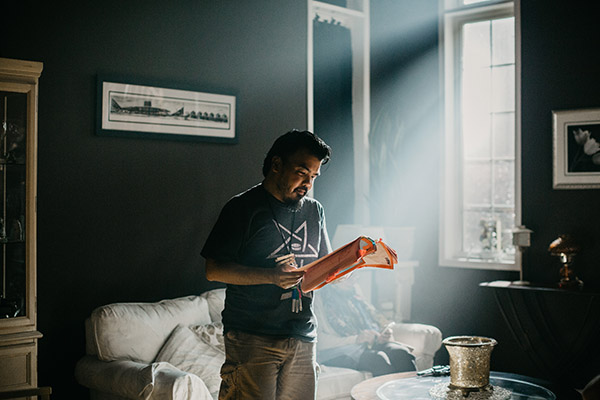 “From a cultural standpoint I was quintessentially Canadian, and I’m proud of that and to this day I’m very proud Canadian. I’m a filmmaker who still lives in Toronto, making Canadian films, rather than just being part of the exodus down to LA,” says Sonoda. “But there was always that part of me that I think was missing and I didn’t know it until I got into my later 30s and now 40s.”

Sonoda’s parents came out of the Greenwood and Slocan internment camps and relocated in Hamilton after the war. As with many Sansei his age, Sonoda was raised speaking English and his parents rushed to assimilate the family into Canadian culture.

Sonoda’s film is not about being Japanese Canadian, but carries Japanese Canadian themes. This can be seen when one character is pressed into a corner, he still choses to protect his family, says shoganai, can’t be helped. Whatever the situation, stakes or danger, family sticks together, it can’t be helped, shikata ga nai. Instead of dwelling on how they got into a situation or what caused it, they forge forward, for the sake of the family. While many Sansei Japanese Canadians may not speak Japanese, many are familiar with that phrase. 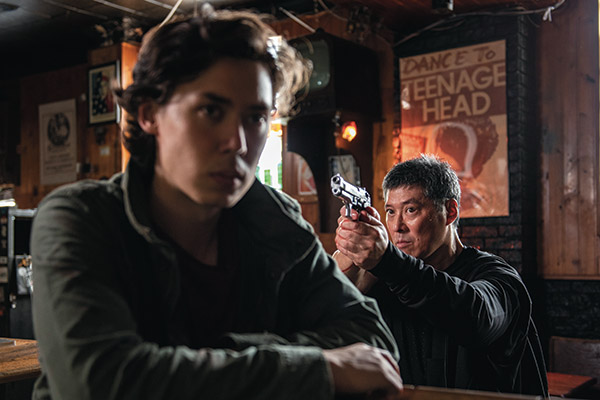 Maximilian Aoki and his real life father (playing his uncle on screen) in a screenshot of Things I Do For Money.

“For me, when I would hear shikata ga nai and now shoganai, it can’t be helped, was such a way my mom would look at things,” Sonoda explains. “I wanted to reference that a couple of times because it is quintessentially Canadian Japanese theme. And when you’re dealing with these themes, especially when it comes to crime capers, any chance you get to put that extra layer or extra texture in, I think that’s interesting.”

As a result, even though being a story about crime, with lots of action, blood and violence, Sonoda has created a deeply personal film unlike any crime film already out there. A film about family, about being Japanese Canadian and about his hometown of Hamilton.

“This movie was kind of willed into existence because of the people behind it and involved it. But I can proudly say, I don’t think anyone else could make this film. And as a filmmaker, that’s part of the reason you make the personal movies that you make, is at the end of the day, you want to put something out there that is you,” says Sonoda.

“And I’m getting closer and closer to making those types of movies and Things I Do For Money is the first one in a long time that I feel really feel strongly about saying, ‘hey whether you love it, you don’t like it, whether it appeals to you, or you don’t connect to it, this is me swinging for a fence that is as far away from what you would think is a slam dunk film, and this is us going for it.’”

For more information about Things I Do For Money, visit: www.thingsidoformoney.com and watch the trailer for the film below:

Also check out Max and Theo Aoki’s cello covers below: