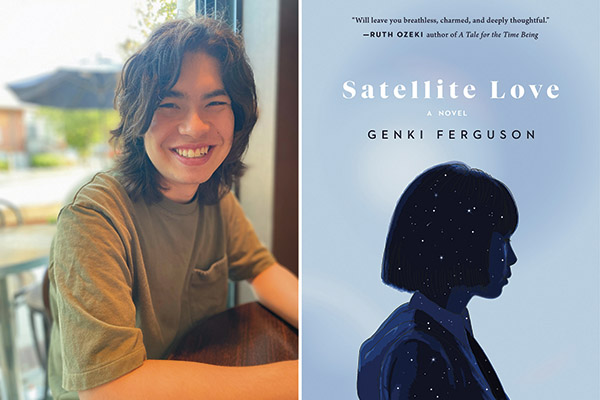 VANCOUVER — Author Genki Ferguson spent the summers of his childhood in small cities around Kumamoto prefecture, visiting his mother’s family. With each visit, he was struck by the blanket of stars he could see above the rural Japanese cities. Born in New Brunswick, but raised in Calgary, the light pollution hid most of the stars from sight.

“I always remember being just so impressed by the dome of stars—I had never seen that before. For me, it felt as though these stars could only exist in Japan because I certainly wasn’t seeing them anywhere else,” Ferguson tells Nikkei Voice in an interview.

Ferguson, fascinated with space and stargazing, was inspired by the image of a teenage girl looking longingly at the starry sky as if trying to make a connection to something beyond this world. This image and his time in rural Japan became the inspiration for Ferguson’s debut novel, Satellite Love, which launched earlier this year. 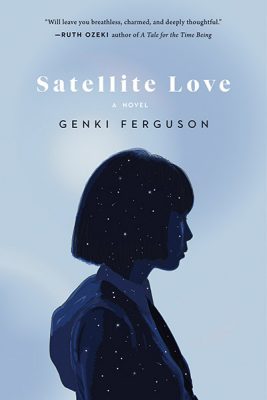 Set in Japan, in 1999, on the cusp of a new millennium, Satellite Love tells an unconventional love story of a girl, a boy, and a satellite. Set in the fictional southern Japanese city of Sakita, which comes to life through visual details and characteristics cherry-picked from the cities Ferguson visited as a child. A stagnant, semi-rural-semi-urban city, suffering from a loss of industry and a population mostly over 60 years old, the city seems to be lost in time and forgotten by the gods.

“I do love these cities, I think they’re beautiful, and I go back every time I’m in Japan, but [there is a] disillusionment or confrontation with reality that inspired Sakita. It’s like seeing it transform every time [you return], but the city isn’t changing, you are changing. You are growing up,” says Ferguson.

Ferguson’s visual writing style stems from his background in film studies, initially imagining the novel as a screenplay for a short film. As Ferguson wrote, he felt restrained by the parameters of a short film and his ability to direct it, and the screenplay evolved into a novel. He completed the book while studying at Emily Carr University, in the film and screen arts program. Ferguson recently graduated with a degree in film production.

“When you’re in film school, you learn [that] writing a screenplay and writing a novel are very different things, but the same principles apply,” he says. “You’ve got to keep plot points going, efficient characterization, strong visuals, and I think those are pretty universal aspects of storytelling.”

Writing also runs in Ferguson’s family; his father, Will Ferguson, is a Giller Prize-winning author. Will instilled a deep love of literature, reading, and writing in Ferguson, and the two would discuss the stories from movies and books together. But, Ferguson wrote the first draft of Satellite Love without telling his father, wanting to prove—but unsure if he could—write a book.

Their writing styles vary, Will’s stories are epic and sprawling tales, while Ferguson’s novel is an internal and meditative story in the mind of one girl and the few people around her.

“Again, it’s kind of like with screenwriting, where the principles apply, no matter what story you’re writing; you still want to have solid characters, tense plot, and to draw in your readers. So we write differently, and we read differently, but that’s not really of too much importance,” says Ferguson.

Ferguson’s novel explores loneliness through its characters, from Anna, a girl who looks and feels like an outsider among her classmates; to Soki, a boy moving to a new city, questioning his religious beliefs; to Leo, a satellite floating alone in space, observing the world below. Despite the characters facing their own internal and separate battles, they find ways to understand each other through empathy and a desire to connect.

“Loneliness can be a binding force too. These characters all live in their own separate worlds, but through that, they find unique ways to understand each other,” says Ferguson. 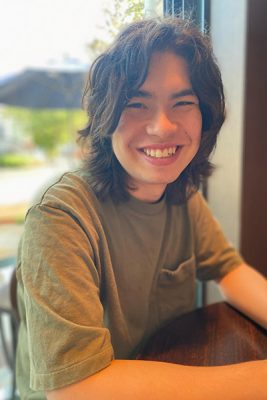 Another influence for Ferguson was Japanese Canadian author Ruth Ozeki, whose glowing review of Satellite Love sits atop the book cover. For Ferguson, Ozeki’s novel, A Tale for the Time Being, was the first time he read a novel about a mixed-race Japanese Canadian like him.

For his character of Anna, her mixed-race identity is not the cause of the isolation and alienation she experiences but is a visual metaphor of it, making her stand apart from her classmates and community. As a young girl spending her time at school and home alone, she begins to indulge and get lost in her fantasies, stuck between the real and imaginary world.

Chapters bounce between different characters’ perspectives, and Anna’s tragic trajectory is viewed through multiple lenses, from her own, to the people in her life. Characters outside of Anna, set up a more complex and wholesome image of Anna as she spirals deeper within herself. Anna is a challenging character to sympathize with, something Ferguson created intentionally to challenge the reader and the limits of their empathy.

“Too often when we read these kinds of tormented or harmed characters, or just when we encounter them in life, we need them to be weaker than us. We need them to be kind of below us to feel sympathy,” says Ferguson. “Satellite Love is about all these characters who all stand apart but find something to connect over, even if they are not fully aware of it, and the way that is done is through empathy, through the ability to look over each other’s faults and painful tenancies.”

For Ferguson, who works at Book Warehouse, an indie bookstore in Vancouver, he has found a connection to readers who come up to him at work to share their thoughts or ask questions about the book. The pandemic has been a collective societal experience, where everyone has felt isolated or lonely at one point or another and many connected to the book’s themes, says Ferguson.

“What surprised me is how I’ve seen people of so many walks of life appreciate and love it, which is really touching,” says Ferguson. “A lot of people are reflecting, and I think Satellite Love at least tries to be a reflective book. Maybe in a way, it has found a more diverse audience than it would’ve otherwise, and I’m very grateful for that.”

Learn more about Genki Ferguson at www.genkiferguson.com and pick up Satellite Love at your local independent bookstore.