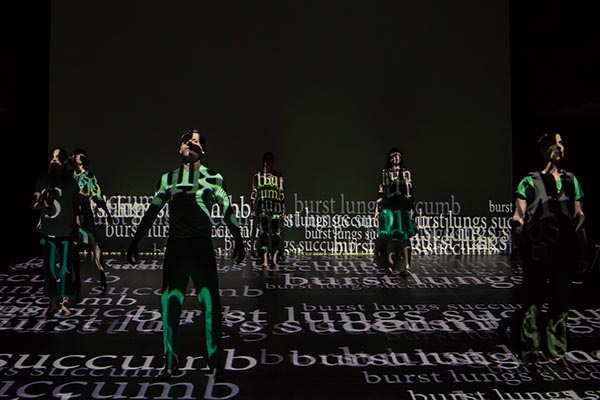 “I saw Natsu Nakajima perform and I knew immediately that is something that I wanted to do, but mostly that I wanted to learn from her,” Fujiwara says. “She seemed to know things that I hadn’t seen in other choreographers before.”

Butoh is a post-modern form of dance theatre that originated in Japan after the Second World War. Nakajima studied directly under its founders, Hijikata Tatsumi and Ohno Kazuo.

Fujiwara had seen butoh performed before and was intrigued by its Japanese-ness, but says it did not interest her at first. She found the movements too harsh and the style dominated by male performers and choreographers.

When Fujiwara stepped into the studio with Nakajima, she quickly realized she would have to forget everything she knew about dance to learn this new style.

“I realized after about five minutes in the studio that actually I knew nothing, and I really had to start over again,” Fujiwara says. “And this was terrifying, but all of my dance studies previous to this were not really useful to me, and were not going to help me to learn and to do this work.”

Fujiwara’s background in dance runs deep. She studied ballet since she was six-years-old and completed her bachelors of fine arts in dance at York University. As well, she competed internationally on the Canadian rhythmic gymnastics team.

“That changed my career, it changed my life,” Fujiwara says. “Because she taught me profound things and it was really a life-changing experience to embody that work and to begin to ponder this arcane form of dance.”

For Fujiwara’s latest project, Eunoia, the first thing she did was train the five dancers in butoh. Eunoia is not a butoh performance and the dance style cannot be seen in the piece, but its principles have been ingrained into the dancers, Fujiwara says.

“They do very different things and they made it seem natural and without artifice, and that’s a reflection of the butoh training.”

Eunoia was performed at the Harbourfront Theatre in Toronto from Nov. 4th to 8th, as well as touring nationally in Calgary, Yellowknife, St. John’s and Halifax.

The performance is divided into five chapters and is based on an award-winning poem under the same name, by Canadian poet Christian Bök.

In each chapter of the dance, Fujiwara challenged herself to the same vowel constraints as the poet.

In Chapter A, only instruments with the letter ‘a’ are used, like the maraca and harp and the performers salsa dance and emphasize movements of certain body parts like their arms, hands and jaws.

Fujiwara introduces the audience to this concept by starting the performance with a game of hangman.

The dancers invite the audience to call out letters and guess the hidden words. After a few rounds of the game, it becomes clear to the audience that all of the words only use the vowel ‘a’. This is how the audience starts to understand the concept of Eunoia, Fujiwara says.

Between each chapter, the dancers interact with the audience to introduce the new letter. While beginning Chapter O, the audience can smell fresh popcorn, while their photos are taken and projected in the theatre while answering crossword problems.

“I also wanted to the audience in a way, to treat the whole evening as a game, or a bit of a puzzle,” Fujiwara says. “Because the mind-set we’re in when we’re trying to solve a puzzle is one of open curiosity and of course that is the best state of mind for an audience to be in.”

Eunoia was a project five years in the making.

Fujiwara says interpreting the poem into a dance was one of the most challenging projects she has taken on, but one that was worthwhile to undertake.

“When I challenged the composer, and the videographer and the costume designer and myself to use similar constraints to the author we all thought it actually might be impossible.”

Like when Fujiwara first studied butoh, Eunoia pushed her to look at dance differently.

“You can’t do any of your usual things, you can’t do the things you know worked in the past, you have to give them up, and that is a very refreshing thing.” She laughs. “I highly recommend it. It’s terrifying.”

Fujiwara is currently working on a duet for two dancers in Halifax, as well as trying to tour Eunoia internationally.

She’s also looking for her next project, and hoping to find something challenging to push her like Eunoia.