Frankly Speaking: Celebrating the life of a judo pioneer 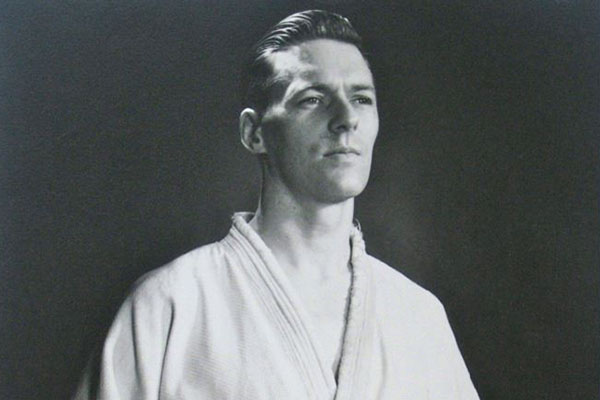 Harry Henning was a Staff Sergeant in the Toronto Police Service and a teacher of the Kodokan Judo in Eastern Canada who inspired his students. Photo courtesy: Brad Henning

Last issue’s column was devoted to the most different and suitable ceremony with which we bid farewell to good friend Tom Takashima. No prayers or hymns but his three smiling sons did a song-and-dance to tell about happy remembrances of their Dad.

That occurred in early November at a funeral home in Mississauga. Then on November 28, there was a second such event with no religious touches, but with what I felt were appropriate gestures.

This time it was retired police officer/judoka Harry Henning who had passed. His age 88. Like Tom Takashima, Harry was also a good friend of mine.

We got to know each other in the 1950s at the Toronto Kidokan judo club which Atsumu Kamino-sensei founded as part of his successful postwar campaign to introduce judo to Eastern Canada. In 1954 when Harry, Bill Aoki, Mits Kamino and I got our shodans (1st degree black belts), Harry was the first non-JC to do so at our dojo.

By then Harry and I had become close, not only on the tatami but as judo scholars who shared each others’ books on the history of that particular martial art—whether written in Britain, Japan (and translated) or the U.S. Later we acted as assistant teachers at the Kidokan dojo in its home at the original Japanese Canadian Cultural Centre on Wynford Drive.

One happy result of these judo activities was the subsequent annual reunions of fellow black belts. Harry sometimes organized the get-togethers (usually at a restaurant) of a dozen or more black-belt friends which were mostly nisei but included some others.

In recent years, Harry had health problems but still took part in teaching judo up in Markham with his son Brad.

When Harry passed away on Nov. 17, Brad called and asked me as Harry’s friend for two favours: To write up a brief bio of his father to use at the forthcoming visitation and also to contribute on that day “Yawara,” the judo song.

The following is the bio, with historic details for those less informed about judo in Canada:

Harry Henning of Unionville, ON, was a retired Staff Sergeant in the Toronto Police Service who also had been a most admired teacher of Kodokan Judo in Eastern Canada.

The tall, handsome judo expert has left behind thousands of enthusiasts whom he taught to love and cherish this most respected Japanese martial sport.

Judo began in Canada during the 1920s in Vancouver, B.C. It gradually grew into a group of dojos along the Pacific Coast and not too far inland.

Then when Japan entered the Second World War in 1941, the following year the majority of Japanese Canadians who resided in British Columbia along the Coast, were sent inland in a mass expulsion. During that time, judo dojos being no more, the art was practised at only a very few places including two of the family camps.

When the war ended in 1945, many Japanese Canadians were resettling in new parts in Canada. In 1947, Frank Hatashita, a Canadian judo champion in B.C. days, started his club in Toronto with eight charter members. Two of them were the blonde Harry Henning and his wife Joan who also isn’t JC. Others were mainly JC judoka from the West.

According to son Brad Henning, his father was subsequently transferred to the Toronto Kidokwan Judo Club whose sensei, Atsumu Kamino had been one of the originators of the Canadian judo movement back in the 1920s.

Mr. Kamino also led the postwar introduction of judo into Eastern Canada. In 1954, four of his students including Harry were promoted to Shodan, the 1st black-belt ranking. That belt demonstrated that the wearer was capable of teaching the art.

And in that promotion, Harry became the first Caucasian to win a judo black belt at his club.

Harry was also a scholar of Japanese martial arts. So much so, he knew more about judo history and philosophy than most of his Japanese-Canadian comrades.

In 1989, Harry retired from the Toronto Police Service. He and son Brad had been active at judo in the Markham area since 1985-6. In 1991, the father-and-son team started the Markville Judo Club at the Markville Secondary School.

And through his continuing teaching of Judo, Harry was eventually promoted to 6th Dan in Judo, a high ranking he well deserved.

Then about 7-8 years ago Harry unfortunately became ill with myelofibrosis. But, he continued teaching judo until finally forced to stop about two years ago. And Harry still kept coming to club sessions whenever he was able to give any form of instruction.

As Brad concludes, “It was always impossible to tell which he loved more—People or Judo—so he just put the two together.”

Brad did some printouts of the bio for those attending the event which was held at a funeral home in Markham. When Betty and I got there, not surprising nearly a hundred folk were gathered to console Harry’s family.

Among them were today’s judo leaders in this part of Canada including Duncan Vignale and Bill Doherty. As we chatted around we found that along with relatives and friends, the rest were many of Harry and Brad’s judo pupils.

As for doing the Yawara, the judo song, I prepared a descriptive explanation because only some of the current-day judo teachers would know it. Even then, its lyrics are in a difficult style of Japanese that even most nisei would have trouble remembering.

So I checked it out by Googling and put together the following, taking along my harmonica to handle the memorable melody:

As a longtime friend of Harry’s, I have been asked by Brad Henning to offer the Judo song today. Yes, although Judo is a martial art, it has its song—the way Baseball has Take Me Out to the Ballgame.

Judo’s song began as the title song of a TV drama series with the same name, Yawara, that was popular in Japan during the 1960s. The hero was a judoka and the series went over well, even to those who knew little about Judo. Mind you, with Judo being accepted as an Olympic sport in 1964 at the Games being held for the first time in Tokyo, Japan, people there were becoming more aware of the growing international importance and popularity of Judo.

As mentioned, the song’s title is one word: Ya-wa-ra. That comes from the Japanese characters that say Ju-Do. The first syllable “ju” means “gentle;” and “do” means “path” or “way” in English. So to the Japanese, our martial art is “the gentle way.” And the first character “ju” meaning “gentle” can also be read as “Yawara.”

By the way, the last time I recalled “Yawara” being played at a celebration of life was for a senior judo master at the same Toronto Kidokan Club that Harry and I belonged to. He was Gen Nakahara, also called Gene, and he was an 8th Dan. We were among the pallbearers.

Anyway, the first line of the original Japanese lyrics of “Yawara” goes like this: Katsu to omo-u-na, om-o-eba makeru.

That is, Don’t think of winning; if you think, you will lose.
And the Japanese lyrics go on to say:

Each time you think of it, you will lose,
But each time you lose, remember that deep inside yourself
The dream of Yawara—that once-in-a-lifetime dream (meaning dream of your best-ever judo victory)

Is waiting to come true.
And so on about “the gentle way.”

Why the gentle way? Here is an official explanation: Judo is the flexible or efficient use of balance, leverage and movement in the performance of throws and other skills.

Skill, technique and timing, rather than brute strength, are the essential ingredients for success in Judo.

For example, in Judo classes, you may learn how to give way, rather than use force, to overcome a stronger opponent.

So here is what “Yawara” sounds like. Naturally played on a Japanese harmonica. ( I played it on my Tombo vigorously to suit the mood.)

Thank you, Harry Henning, for your love of Judo and the way you passed that treasure on to so many others. We will never forget you.

That was the only “formal” item presented at that goodbye gathering for Harry Henning. I was most happy to be asked to take part.


Thank you Mr. Frank Moritsugu for writing such a thoughtful piece about Sensei Harry Henning. A few comments in addition to Mr. Moritsugus’.
Harry often visited dojo(s) to share his knowledge of judo. One of those times was when both Harry and his son Brad visited our club’s summer judo camp (Judokan). He, (they) taught the students to participate in every possible form of warm up. I myself never knew there were that many forms of push-ups. Sensei Harry used me as his uki to demonstrate effectively Hadaka Jime, a choking technique. He did not apply the technique to it’s full capability, but it was a smooth transition to say the least. Finally, Harry Sensei was one of the few who expected nothing in return.