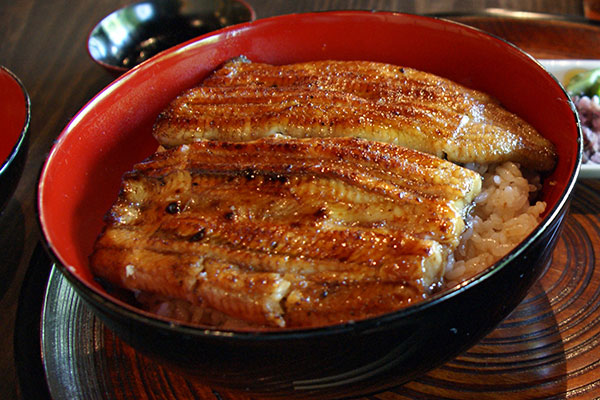 
Unagi is a freshwater fish and is often served barbecued on top of a bed of rice. It’s delicious and salty, and a staple Japanese dish. Photo courtesy: WMC

The other day when I sat down for supper, my plate looked like this: A portion of unagi donburi, some kuromame (seasoned black soy beans) and chunks of kabocha (Japanese squash). Wow! I thought, how Japanese can I be?

And picking up my chopsticks, I enjoyed every bit of this meal. The only thing missing was a bit of fukujinzuke, the so-called seasoned vegetables which are little brown Japanese pickles to me.

The unagi donburi, leftover from lunch at our favorite nearby Japanese restaurant, is one of my favourites while Betty usually  selects oyako donburi.

Unagi is a freshwater eel and comes barbecued seasoned with shoyu and sugar.

It is one of my favourite Japanese-style seafoods.

Like many other JCs of my vintage, I’ve been eating unagi since I was very young: And it was something normal to do and enjoy in our Vancouver home. It was only in my teens that I learned that unagi is part of the snake family, at least in looks. My reaction was, “So what?”

The same for tako, the octopus, whose cooked tentacles were special treats on festive occasions. And I didn’t discover that tako was related to the sea monsters in Hollywood movies until much later.

And if I were introducing the pleasure of unagi to anyone younger, why mention the snake connection? Let him or her discover if the taste was good first as I had done way back then.

This reminds me how fortunate we are to have acquired a lasting knowledge of Japanese foods from our immigrant parents.

Most families I knew back then had a regular mixture of Western foods and Japanese foods for their meals at home. And in our case, some of us kids liked Japanese foods best while other sibs were sandwich people.

One thing I remember is that at our home in Vancouver rice was cooked for each meal even when it were Western-style meat and potatoes with other vegetables (without shoyu or miso). And if Mom made stew, some of us ate bread on the side while I, for one, preferred rice.

And I have never forgotten that when setting the supper table, Dad’s place always had chopsticks with the knife and fork. I finally asked Dad why chopsticks with the steak and potatoes? He answered that he had to eat rice, too, and unlike wooden chopsticks the fork was too cold and spoiled the taste of gohan.

Another advantage of growing up Japanese Canadian in Vancouver was that most Issei parents also liked Chinese food. So we got early introductions to  Chinese  noodles, as well as chow mein,  chop suey and pakkui (Chinese-style barbecued spare ribs).

Because Dad was one of the Issei with a car (a Ford pickup needed for his landscape gardening business), we’d all get into the open back while Dad and Mom with the toddler(s) sat in the cab, and drove across town to a Chinese restaurant in Japantown’s Powell Street.

At the Sun Nom King, we kids would always have the child-size portions of noodles in soup that JCs called “Nankin Soba.” And as we grew older, we learned more and more about the variety of Cantonese dishes there were.

Nearby on the same block was the Shin Pekin. And business was so steady that a Japanese-owned restaurant was opened at the western end of that main  Powell Street block. It was called Fuji Chop Suey and was a larger two-story building, and became the setting for many wedding banquets and other community events.

Eating Chinese was such a normal thing among JC families that after the war in Toronto’s Chinatown, a few places became favourites for us who were driven from B.C.. By the way, in the 1940s while the war against Japan was still on, the first  so-called “evacuees” who came to Toronto were mainly single men. And naturally, they would go to eat Chinese.

Soon word got around even to those of us not yet in Toronto that only two or three of the many chop suey houses in Chinatown would accept JC customers. So through the mail or telephone conversations, those of us elsewhere in Ontario such as the Moritsugus in St. Thomas on Mitch Hepburn’s farm learned the names and addresses of the few places on Elizabeth Street that would accept us when visiting Toronto.

When the war ended, Toronto’s Chinatown opened most of their doors. Not only because the war had finally ended with Japan’s defeat, but because many Chinese Canadians from B.C. had left that racist province and come to Ontario’s largest city.

And their reports of our wartime mistreatment could have also helped the Chinese restaurateurs to change their minds about us would-be customers.

It got so that eventually, at fav- ourite restaurants like the Golden Dragon and Sai Woo when a group of JCs showed up the Chinese waiter would ask, “Nankin soba?” Which was probably the only Nihongo he knew.

In that postwar era, when most JCs from B.C. were starting new lives and still trying to prove to all and sundry that we were 100 per cent Canadians, I recall one Toronto incident that showed how some Nisei were trying to be accepted by the white majorities.

It was in the mid-1950s when I was working on Canadian Homes & Gardens magazine.

One day, I stayed at the office late at Dundas and University Avenue to meet deadline. I went to the next block on Dundas Street to a relatively new restaurant called Sea High to have a quick supper before going back for a couple more hours’ work.

As I sat at a single table along the wall, a group of guys came in. And their chatter suggested they had come from a nearby bowling alley. They were all white except one who was a Japanese-Canadian lad I knew distantly.

When they settled down, the Chinese server setting their places came up to Joe and asked, “Chopsticks?” Joe shook his head and said, “Never use the things,” obviously for his companions to hear as well as the server.

Then as the gang looked at their menus, one of them said, “Joe, why don’t you select the suitable dishes for us?” And Joe’s quick answer was, “I don’t know anything about this stuff, I’ll go with whatever you choose.”

I thought “Poor guy. Trying so hard to seem just like the rest of his comrades.” (By the way, he never looked in my direction, and there was hardly anyone there at the time.)

And another such example: Years later, one of our family members on the hakujin side mentioned that one of his fellow workers was Japanese. He turned out to be sansei and he had also maintained when they were deciding where to go for lunch that he had nothing to do with eating Asian—Japanese or Chinese.

So it’s a good thing for their sakes that many decades later, the Love-Sushi Tsunami has invaded our worlds. Now in our cities, some plazas with a half dozen or more shops can have not one but two sushi places. And at those places, most non-Asians 50 and under who enjoy Japanese and Chinese restaurants can use chopsticks naturally—while consuming all-you-can-eat feasts.

Yes, some of the changes in our lifetime have been most positive. And in a few more days, I can get another unagi donburi.

And meanwhile, as they say, Bon appétit!