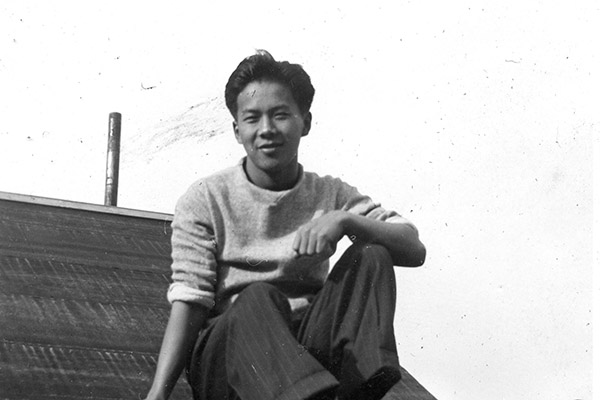 TORONTO — Imagine! This year, 2022, is the 80th anniversary of when we Japanese Canadians were kicked out of our homes along the B.C. coast.

During 1942, we were kicked out and sent more than 100 miles inland after Japan entered the Second World War. On Dec. 7, 1941, the Japanese Navy attacked a part of the United States: Pearl Harbor in Hawaii. Until then, the Great War had concentrated in Europe—with Canada and the U.S. also involved.

What was it like for us Japanese Canadians? (There were 22,000 of us in B.C. at the time.) And 80 years later, I am one of those still around to recollect how we were mistreated by our own government for racist reasons.

In B.C., the westernmost Canadian province bordering on the Pacific Ocean, the majority of Japanese Canadians had been making our homes. And in early 1942, a few months after the Pearl Harbor attack, a so-called ”partial evacuation” was announced, meaning that male JC immigrants were to be sent away from the 100-mile-wide “protected area.”

In our family, that meant Dad, who had immigrated in the 1910s, was sent with others to a road work camp. His was at Yellowhead, close to the Alberta border. That was in February. Then in March, it became a “mass evacuation,” meaning all JCs in the coastal area were to be sent inland.

So that included Canadian-borns like me. I had turned 19 a few days before the Pearl Harbor attack and was among the many so-called Nisei and naturalized males to also be sent to work camps—this time near Revelstoke and Sicamous.

As the oldest of the eight Moritsugu children, I was the only one 18 or over at that time. Brother Ken came after me to the same road camp when he turned 18 later that year. That left Mom and six younger children still in our Vancouver home and wondering when they would be moved too.

The road camp I was sent to was called Yard Creek. But the early ones like me were sent first to Cambie Siding, a nearby railway offside. And I joined the kitchen gang that served the other evacuees and the all-hakujin camp staff.

As the oldest of the Moritsugu family and followed by two brothers, I had been taught by Mother how to work in the kitchen, preparing for meals, cleaning afterward, etc. So now I was doing similar work on the train coaches parked on the Siding. When the Yard Creek work camp was completed, we moved into it. And many more Canadian-born and naturalized guys kept joining us. In all, our camp held about 100 of us evacuees.

By the way, “naturalized” means anyone not born in Canada who had become a Canadian citizen legally. They were relatively few because getting citizenship was almost impossible in B.C for those of us who were not white. But some older Issei men had become naturalized because employers of certain work they got had demanded the government make them citizens.

The Yard Creek road camp was one of four such camps created along the Revelstoke-Sicamous stretch of the national highway. As we early arrivals waited at the Siding, two bunkhouses, a mess hall with camp staff’s office space attached, and a bathhouse were completed. Because most of the “naturalized” campmates were older men who spoke mainly Japanese, they occupied one bunkhouse, while English-speakers like me and other Nisei stayed in the other one.

Then some weeks after our camp was nearly filled, the order came for all married men to leave camps like ours and go to the B.C. interior sites to complete the preparation of the camps for the families. And that was why wives and children (and grandparents) were among the last to leave their coastal homes to go to these camps. 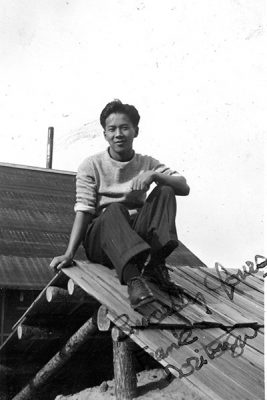 This meant that like other men’s work camps, at our Yard Creek camp the Canadian-born and the naturalized men who were married were moved away to work on the family detention camps. Some “naturalized” men were not married, so they stayed. The result was that when we camp inmates were dealing with the staff to discuss important matters, despite being only 19 years old, I was selected as one of the speakers at such events. The major reason was that I was bilingual enough to translate in English to the staff any opinions or suggestions a single naturalized camper had said to me in Japanese.

And with all the young married Nisei men gone, my prewar experiences apparently made me more able to participate in public meetings than my fellow Canadian-born mates. One reason was that at Kitsilano High School, I had been elected editor-in-chief of the Kitsilano Life, the student newspaper, and therefore a member of the student council of the largest secondary school in the province.

In addition, the Pearl Harbor attack made the government close all JC newspapers except The New Canadian, an English-language weekly for the Nisei and Sansei readers. Its first editor, Shinobu Higashi, knew about me. And after his departure earlier in 1941 to Manchuria to work on a Japanese-English paper there, Tom Shoyama, who came from Kamloops and had two UBC degrees, also knew about me. So I was asked to join The New Canadian staff.

And because in Vancouver, December was when the landscape gardening business that my father ran became quiet. So I had the time every weekday to go on a streetcar to get from Kitsilano to Japantown, where The New Canadian office was in a building called Hotel World. And it was across Dunlevy Avenue from Powell Grounds, where the Vancouver Asahi baseball team showed other teams how good baseball should be played

This work downtown only lasted for a few months because I was evacuated in April to the Yard Creek road camp. But during the time I spent on the paper in Japantown, this Kits kid also got to know several of the B.C. Nisei elders and what their eloquent speaking and writing attitudes were during the wartime emergency and towards our future. And after I was sent to Yard Creek, naturally I would send a column or news story occasionally to be published in The New Canadian.

By the way, because we were then at war with Japan, the Canadian government had introduced censorship of any letters or publications that we JCs sent. The official checking was by the so-called Enemy-Language Censor. And sometimes, a personal letter arrived with a part of it cut out by the censor. That meant we had to be careful of what we were telling the recipient.

As mentioned, I was sent to the road camp in April 1942, and in September, I had to stop working as a Yard Creek mess hall staff member because I had appendicitis. The doctor who examined me, a white guy, said, “It’s not very serious, but why not get it operated when the government would pay for the operation?” So I did.

After a few days in the Revelstoke hospital for the operation, I was driven back to the Yard Creek camp to spend two to three resting weeks for my full recovery. That meant for that period, I didn’t have to get up early to go to the mess hall to prepare for everyone’s breakfast; do the same for lunch; and supper, with time in between meals. Instead, in our bunkhouse, I slept in daily, and it being autumn, I spent most of the time in my pyjamas; didn’t go out much; and stayed in our bunkhouse where I was the only one during work hours.

One day, as I was feeling a bit better, I thought of something good to do. One bunkmate Tom Uyesugi had the wisdom to bring a portable gramophone and some records, including jazz ones. It was a nice addition to the radios we were allowed to have at the camps. (Back in our homes after the war with Japan began, all radios had been taken from us). Now inland, we were allowed longwave radios, so most of us had ordered battery-operated ones from Winnipeg dealers during our first weeks together.

Anyway, Tom’s records included some Artie Shaw ones, which I quite liked. And I got thinking about dancing. Because at Kitsilano High School, during the mixers for the senior grades, I was one of those who stood and watched others dance because I couldn’t.

One reason was that most immigrant Japanese opposed their children learning ballroom dancing. It was a Puritanical objection and avoided touching. They bowed rather than shaking hands, didn’t they?

In the Yard Creek bunkhouse, I had gotten a copy of Arthur Murray’s how-to dance book. With Artie Shaw’s nice sound, in my pyjamas and slippers, I kept moving to the rhythm. Boldly, because everyone was working somewhere else.

My chance to try to really dance with a partner (female, of course) finally came in the following year, in 1943. We road campers were allowed two-week visits to the family detention camps where our parents and siblings were. So brother Ken and I got together and went to the Tashme camp to be with the rest of our family.

The Tashme-ites were kind enough to hold a dance party at one of the school buildings, which used to be a barn. This time I didn’t have to stand at the side just to watch others. Rather, I could ask a young lass to dance. Which I did, and I felt able to go through the right motions and didn’t worry about stepping on her petite feet. Those Artie Shaw dance practices at Yard Creek sure paid off.

(These 80th Anniversary remembrances will continue in the next issue).