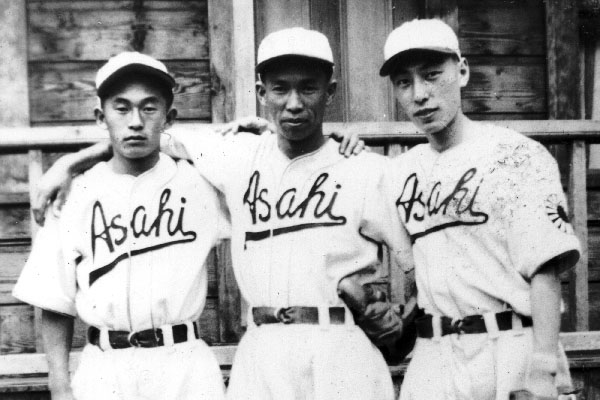 That front-page photo of three ballplayers in the last issue was to illustrate the forthcoming Sakura Gala in Toronto honouring the memorable Vancouver Asahi team. Of the three prewar Vancouver Asahi players shown, the only one identified was Kaye Kaminishi. The other two were leftfielder Frank Shiraishi (centre) and infielder Chuck Terada (far left).

Seeing Chuck in the Asahi uniform brought back special memories to me because he was a Kitsilanoite as were Asahi icons Roy Yamamura, Reg Yasui and Bob (Yasui) Higuchi. Chuck whose Japanese name was Mitsugu) became an Asahi in 1940.

A New Canadian report at the time said that Kaz Suga discovered him and in a short time Terada was on the Asahi bench ready to play short or second base. It is most likely that if Pearl Harbor and the resultant mass expulsion hadn’t closed down the Asahi team like most other prewar JC organizations, Terada could have risen to star status in a season or two.

He grew up in Kitsilano in the 1930s as I did, so I also knew about his other athletic abilities and especially his judo ability. The most dramatic example of that happened in either 1937 or 1938 at Kitsilano High School which we attended.

Although most nisei had good non-Japanese friends, too, in those days there usually was an anti-Oriental gang among the white students at a school like KHS with its large and mixed student population.

One factor was that every now and then some disagreement would have occurred during recess or lunch time so that after-school became a battlefield.

Kitsilano High whose buildings and grounds occupied two full blocks was adjacent to large rectangular Connaught Park. If there were going to be group fights, they happened at that park across the street from the school. Just as well, because once you crossed the sidewalk surrounding the park, most of it was grass field except for the baseball or softball diamonds.

One afternoon, word got around among the nisei students coming out to go home that we older guys should hang around because a white gang had threatened to come and beat up the “Japs.” So we did wait—either as would-be participants or at least as spectators.

Then the white gang came, most of them were taller and larger than us. And crossing onto Connaught Park they started yelling and physically attacking. Suddenly, it happened.

A near-six-foot-tall blonde guy came somersaulting into the air before landing on the park grass while yelling that Japs fought dirty. The tosser was Chuck Terada. He was several inches shorter and many pounds less than the victim but as good at judo as he was on the baseball field.

In fact, other nisei defenders were also judo men and after two or three other dramatic throws, the so-called battle was over. The would-be attackers picked themselves up, complaining about the so-and-sos with their dirty jujitsu tricks, while we lookers-on felt totally clean.

In the 1942 expulsion, Chuck was moved to Alberta. After the war ended instead of staying there or coming eastward as other “evacuees’” did, he moved to Seattle, Washington. There he became part of the JA community and showed his baseball prowess down there.

Remembering that Kitsilano High incident also brought to my mind the 50th anniversary reunion of the school’s Class of 1940 which took place in 1990 at Vancouver. For Betty, who is a Torontonian I married, this was a novel visit. For me, I was looking forward to seeing many of my fellow graduates for the first time since we graduated.

In the class of 1940 which numbered about 80 graduates, five were nisei: Sumi Iwamoto, Jack Kobayashi, George Suzuki, Min Yatabe, and me. Sumi wasn’t interested in attending, while George and Min, fellow WW2 veterans like me, were away at the time visiting places in Southeast Asia where they had served during WW2.

So, with George and Min away, and also the five of us affected by the 1942 expulsion, I offered to give a report to our fellow graduates about what we had gone through including military service into which many of our hakujin friends had already enlisted upon graduation in 1940. Curiously, there was no response to my offer from those arranging the reunion. On our arrival there still was no answer.

I discovered that among the organizers, two were not crazy about me even after 50 years. I assumed that Jack still resented me because instead of him, I was elected by the journalism class to be editor-in-chief of the school paper in our final year. Doug had been president of the Student Council when after attending the first meeting as a member because of my editor appointment I wrote in my first “Frankly Speaking” column how under-impressive the discussions had been—using even more blatant words such as “babbling,” and “incoherent.”

That column which journalism teacher Jean Story had approved brought the principal into our classroom a few days later ordering us to never again criticize the Council. I remember how embarrassed Miss Story was as he carried on, so much so that she seemed to not know where to look. I learned then and there how powerful words can be, and why I wanted to be a journalist.

The Class of 1940 Reunion, by the way, did have positive things for me, too. Seeing friends like Barrie Morris who had lived near us and played together on weekends. He said, “Remember the rides we had in your Dad’s pickup truck?” (Dad had been a landscape gardener so was among the relatively few issei back then to own a vehicle—which was a Model A Ford pickup that took us everywhere.)

On a wheelchair, bandaged from a recent operation, was Earl Heisler who was the tallest in our Grade 7 class. Earl couldn’t recognize anyone in his condition, but it was good to see him and remembered how he had made sure back then that shortie me wasn’t picked on by others.

As I neared a table, a voice said, “There’s Frank, my best friend.” It was Bob Rand who I was seeing for the first time since we graduated. We corresponded with each other while he served in the RCAF in Canada and overseas and I went through my road-camp and ghost-town experiences.

This meeting with Bob resulted in Betty and I later driving up the Coquihalla Highway to the Shuswap area where he and wife Isabel lived.

Such encounters made the reunion of 1940ers quite heartwarming.

Like many survivors of the WW2 mistreatments, I am of two minds about British Columbia and Vancouver. I can understand why several friends eventually return to the original home country after retirement out east. I have many cherished memories of good times I had growing up. But experiencing former schoolmates who still hold onto their anti-attitudes, as I did at the high-school reunion in 1990, also brings back a bad taste in the mouth.