Frankly Speaking: Saluting a good friend and her husband 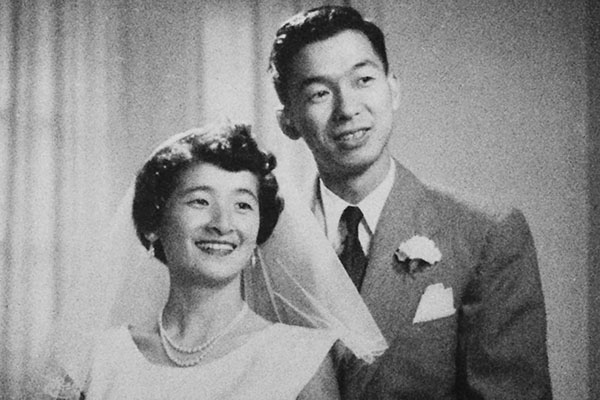 Remembering the influences of Mitsy and Roy Ito on JC history, and good friends. Photo: Roy and Mitsy Ito on their wedding day in 1951. Photo courtesy: Carole Ito.

On Dec. 29 at Hamilton, Ont., Mitsy Ito passed away after a full and rich life. Unless you are related or a close friend, you may not have heard the news because her obituary was published only in the Hamilton Spectator.

Mitsy was 91 years-old, and had four children, ten grandchildren, and five great-grandchildren. Her husband had predeceased her in 1999.

I was fortunate to be close friends with Mitsy and her husband, Roy. Yes, the Roy Ito who was a Second World War veteran, who became a schoolteacher and principal in Hamilton and the author of two superb books about Japanese-Canadian history.

First there is We Went to War, about JCs serving in Canadian military during both the First and Second World War. Roy’s other book, Stories of My People,   includes more impressive examples of JCs showing the rest of Canada that we have always been 100 per cent Canadian.

In addition, Roy wrote several schoolbooks including The Japanese Canadians a powerful illustrated history of JCs starting with Manzo Nagano. The book is written for high-school students, but I am lucky to have a copy of that handsome book, too.

Despite the accomplishments of her prolific husband, Mitsy Ito also should be recognized as a Canadian nisei heroine. Why? Because without her encouragement and support, Roy surely could not have done as much or as well as he did.

Roy and Mitsy’s daughter, Carole Ito, told me she agrees: “My Dad had to travel a lot (which he loved, she adds) for his research and Mom held down the home front with four kids. She was the heart of our family,” said Carole.

One reason I concluded about contributions to Roy’s successes was because of a lesser achievement of my own. The one book about JC history that I managed to produce with a strong team of former ghost-town camp teachers called Teaching In Canadian Exile, could not have been realized without my wife, Betty, and her continued support during the several years it took to create.

And I am sure most creators, male or female, are lucky enough to have their partners behind them all the way.

Mitsy grew up in the Okanagan area with her friend Ets (Kinoshita) Irizawa, and was not from coastal B.C. like the Jcs who were expelled in 1942. Mitsy was Mitsuko Maehara back then and her parents had a family farm on the west side of Okanagan Lake.

I asked Carole when and where her parents had got together, and she replied, “I believe they first met in Winnipeg at a YMCA dance and later again in Hamilton.”

If that had happened in 1947 I happened to be in Winnipeg as well, working for The New Canadian. And I remember Roy returning from the Canadian Army service in Southeast Asia and stopped briefly in Winnipeg en route to his home and family in Iron Springs, Alta. (sugar-beet country). I remember the local dance where they met, which was at the Y-W-CA, because along with housing the Niseiettes Club, nisei men like me also played basketball at the YWCA gym, as well as attend the Thursday night get-togethers where we could dance with Nisei lovelies.

Carole said her mother interned as a dietitian at the Toronto General Hospital before moving to Hamilton, Ont. in 1949 to work as a registered dietitian at St. Joseph’s Hospital. Roy was just graduating from McMaster University in Hamilton in 1949, and they were married in 1951.

By the way, Roy was the first JC to be accepted into an Ontario university when he attended McMaster in 1943. He moved to Hamilton from Kaslo, B.C., where he had worked as the assistant English editor of The New Canadian shortly after his family endured their first sugar-beet harvest. And to replace him, when he left for Hamilton, The New Canadian editor, Tommy Shoyama, arranged to have me become Roy’s successor and leave the Yard Creek men’s road camp where I had spent the last 16 months.

Roy and I to know each other in the weeks after the Pearl Harbor attack, in December of 1941, and we soon became close. So in early 1945, when I was in St. Thomas, Ont. with my family after leaving Tashme, Roy sent me an excited letter from McMaster about the ban against JCs from B.C. enlisting being lifted.

His message said, “Wow! We can join up!” And soon after we became Canadian soldiers and ended up serving in Southeast Asia at different times.

As life settled down in the 1950s and I became a Torontonian, we used to see each other from time to time. Including during the April 1988 Ottawa rally, successfully campaigning for redress. Roy and Mitsy were among the Hamiltonians and Nisei veterans and their spouses rallying for redress.

In another occasion, Mitsy joined Roy to Vimy Ridge in France to locate the graves of Japanese-Canadian soldiers killed in the Great War and buried at various military cemeteries there in 1991. The Itos were accompanied by fellow Second World War veteran Stum Shimizu and his wife June, who is my sister.

Their visit is described and well illustrated in Stories of My People under the title: “The Pilgrimage to Vimy Ridge and the Japanese Canadian War Graves.” You can find the chapter on page 91-117.

The unfortunate fact about Roy’s two major books are that they are currently out of print and only a few copies are still available. Copies of We Went to War are on sale at Toronto’s JCCC. And Jennifer Hashimoto of Nikkei Books says the only copies she has of either book are second-hand.

So if you don’t have either book, some public libraries carry We Went to War that can be loaned out.

In the Toronto Public Library system, seven branches have copies for loan and the Toronto Reference Library has a copy to be used on its premises.

Some university libraries have copies of both books, but usually they are for use at the location and not for loaning out. Or you’ll have to borrow a copy from a friend.


[…] Roy Ito recorded in his history, We Went to War, 184 Issei served in the Canadian Army during the First […]