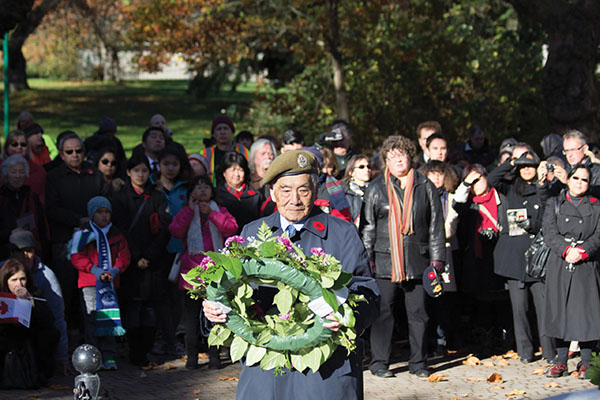 As I write this, Remembrance Day is coming up, and as a Second World War veteran, I am reminded of the Canadian-Japanese contributions to the two world wars.

When I was growing up, the special day used to be known as Armistice Day after the ending of the Great War in 1918. And nisei like me eventually learned that many issei volunteers had fought for Canada in the European war.

Particularly, the war memorial in Vancouver’s Stanley Park commemorated the valiant efforts of issei soldiers in the First World War.

As I learned much later, 184 Canadian Japanese soldiers mainly from B.C. served in Canadian Army in Europe. Of them, 54 were killed in action during battles in France and Germany, while 118 others were wounded. Of the original 184 men, only 12 men escaped injury.

And six years after that war, the surviving veterans were finally given voting rights which other Japanese Canadians in anti-Asian B.C. did not have even if they were naturalized (i.e. had become citizen).

Then during the Second World War, Japanese Canadians in B.C. were not allowed to enlist in Canadian military, nor were Chinese Canadians. Japan’s entry on the enemy side in December 1941, and the bombing of Pearl Harbor, led to the mass expulsion from the West Coast in 1942 of the JCs, including the surviving WWI veterans, too.

Then, after this mistreatment which not only included taking away all our properties and sending us to work camps or family detention camps, in late 1944, the ban against the naturalized or Canadian-born JCs enlisting was lifted, much to Canadian politicians’ chagrin.

The British forces in Southeast Asia were in dire need for Japanese-language interpreters and translators. The army was looking to get usable information from a growing number of Japanese prisoners-of-war in Burma, Malaya, Indo-China, etc. In the British Empire as it existed then, Canada was the only country with a sizable number of persons of Japanese descent. 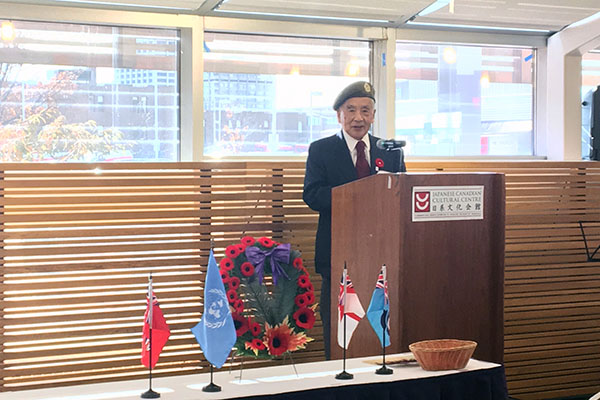 I was in St. Thomas, Ont., when my good friend, Roy Ito, who was at McMaster University, sent a letter saying, “Wow! Wow! We can join the Canadian Army!”

Our family had moved east after leaving the Tashme family camp in November of 1943, and I had left Kaslo in March 1944, where I had worked at The New Canadian for seven months after 16 months at a road camp near Revelstoke.

I decided I would volunteer. Unsurprisingly my parents asked how could I volunteer after the way we had been treated by the Canadian government? (By the way, some reports about my joining have said it was against my father’s wishes).

But any accounts I have written mentioned that both my dad and mom came around to my way of thinking, which summed up as follows;

“We’re in Eastern Canada and trying to make a new start in our lives. Although the people in Ontario are not so against us the way people in B.C. were, some of them  wonder what we did that was so bad we got kicked out of our native province. But if I join the army and can wear a uniform with Canada on the shoulders, like my hakujin high-school buddies have, then we’ll have a much better chance of being accepted out here—not only me, but my brothers and sisters as well as you, Dad and Mom.”

That discussion resulted in my parents wishing me well not only when I enlisted, but when I came home on embarkation leave because the group I belonged to was being rushed overseas to help the British forces in Southeast Asia.

And judging from what I learned about some of my nisei comrades, I was one of the fortunate ones. Several of those who also enlisted in Eastern Canada, whose parents were still back in a ghost-town camp, didn’t have the chance to convince their opposing parents otherwise. They had become Canadian soldiers despite such threats in reply letters such as, ‘you aren’t a member of our family anymore.’

In my case, when I arrived in London, Ont., to enlist, I was joined by a longtime Kitsilano friend of mine, Jack Nishizaki who had moved to Chatham after being sent to one of the Northern Ontario road camps. Jack and I were of similar age and had shared Japanese school and judo among other things.

Then after we had become soldiers and donned our new uniforms, and got passes to leave the London camp for few hours. On our way to the downtown Chinese restaurant, Jack said, “Frank, I have to tell my brothers that I joined the Army, would you come with me?’

Jack’s older brothers, Fred and Joe, were in London, after being released from the Angler prisoner of war camp in Northern Ontario. They had been among the gambariya resisters to the orders to evacuate their homes in Vancouver and separated from their families and sent to work camps in the B.C. interior or Ontario.

Jack and his other brother, Harry, had been way working outside Vancouver and had not joined the resisters. Harry, a good athlete, was at the same Revelstoke-area road camp as me and my brother Ken had been. Jack had been sent to the Ontario camp.

This meeting was not only with his brothers but also with other former gambariya in their London bunkhouse (they worked for a company in the Ontario city). It would be a toughie.

Much more for Jack than me, although, I would know several of the resister men there, as well.

So gritting our teeth, us two novice soldiers went to the bunkhouse. Being Saturday, the men weren’t working. Braving their angry frowns, Jack told his brothers and others why he joined the Army and I tried to support him. I never learned how convinced they were then, but in years after when life had turned normal, we remained longtime friends and at times such as the Kitsilano Reunion in Toronto in 1992, we happily worked together organizing a most successful event while spending much time talking about the good old prewar, days when life was much simpler before Pearl Harbor.

A few days later, Jack and I were among those enlistees to be sent to a basic training camp, in of all places, Chatham. Because we spent a very short time there, there are two things I recall:

Firstly, before enlisting I had just lived a year in St. Thomas with my family, which was one of three Japanese families at former Premier Mitchell Hepburn’s 100-acre Bannockburn Farms. Having arrived the previous March, this city hick was immediately assigned the least exciting labours that a large mixed farm could offer.

In my case, it meant getting up extremely early in the morning, hurriedly putting on work clothes and walking across three or four farm lots to the dairy barn to strip cows.

“Strip”, because on the Hepburn farm, the milk cows were milked by very modern machinery. But some cows were left with some milk after the machine had done its job. So armed with a stool and bottle, those like me would go to specific numbered cows and sit down and strip out the remaining milk. All while hoping not to be swatted in the head by a swinging cow’s tail drenched with cow urine.

After joining the army, in the barracks the wake-up time was 6 a.m. And I heard some guys complaining about how bloody early that was.

While I, used to getting up at a quarter to five, to get dressed, go out to the barn to strip and clean up and then back home by seven for breakfast before going back to the other farm work at 8 a.m. So at the Chatham basic training camp, I felt so lucky to be able to sleep in until six.

By the way, all that physical work during that a year at the Hepburn farm really made me physically healthy. That was proven at any of the training tests we had to undergo in the attempt to become proper soldiers.

(Having run out of space again, I will continue ‘Things I remember on Remembrance Day’ in the Holiday issue.)


[…] much better chance of being accepted out here,” was how Second World War veteran Frank Moritsugu remembered his thinking before he enlisted as a Japanese translator with the Canadian Army Intelligence […]


[…] message said, “Wow! We can join up!” And soon after we became Canadian soldiers and ended up serving in Southeast Asia at different […]


[…] well, Nisei veteran Frank Moritsugu gave an enthusiastic speech about his recollections during his service in the Canadian Army during […]


[…] instance, when I was in the Canadian Army, the food was healthy, but like many other Canadian Nisei, we naturally missed meals with steamed […]


[…] in the Commonwealth. Despite his parents losing everything they had worked for during the war, Moritsugu enlisted, wanting to prove that Japanese Canadians were 100 per cent […]