Frankly Speaking: We needed Munenori Kawasaki as much as the Blue Jays did 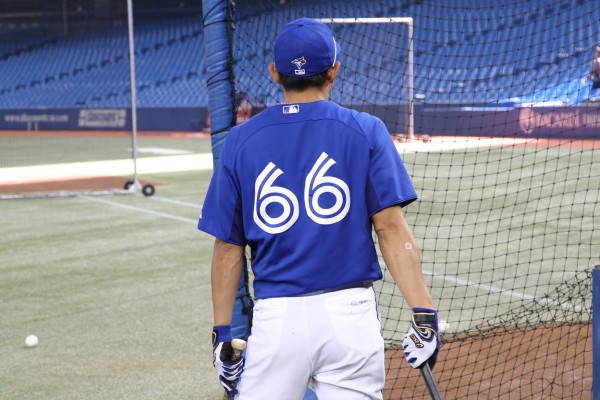 It’s been a particularly strange season so far. Five former all-star players joined the Toronto baseball team and got forecasters predicting the Jays will finally get into the playoffs this time around.

Despite occasional glimpses of top-flight play, our team keeps hogging last place in the American League East Division. Reasons: Injuries to key players, and although the bullpen is steady and reliable, the starting pitching has been disappointing.

There was one novel change in the Blue Jays which grabbed the happy  attention of fans like me. On April 13, less than two weeks after the 2013 season began, shortstop Jose Reyes sprained his ankle sliding into second base. This looked really bad because he was one of the former all-stars who had moved to Toronto.
But look who arrived (from the Triple-A Buffalo Bisons) as his replacement: Munenori Kawasaki! Wow, the first Japanese position player to join the Jays. The few Japanese Jays before him had been relief pitchers and made little impact.

Who was this new Blue Jay? From 2000 to 2011 Kawasaki (born in Kagoshima) played shortstop for the Fukuoka Softbank Hawks in the Nippon Professional League. During that time he was an NPB All-Star eight times, twice won the Golden Glove award, and played on Japan’s national team in the World Baseball Classic (2006 and 2009), as well as in the 2008 Beijing Olympics.

Then in 2012, he followed in the steps of his idol, Ichiro Suzuki, and joined the Seattle Mariners. After 61 games, he was released, so in March of this year, he joined the Blue Jays’ minor-league team, the Buffalo Bisons, but before he could make any impression there, he was moved up the following month to Toronto to take Reyes’ place.

So our new shortstop was a slim 165-pound fellow and reportedly 5’10”, though he looks smaller among his bigger teammates. On the field Kawasaki was quick and steady—watching him throwing to first after touching second in a double play was impressive. During the play he was turning and throwing smoothly while flying up in the air.

While at bat, he was described as a “slap hitter”—hitting mainly singles and getting on base because of his speed. But the reason why he got many fans on his side was his very different personality.

Several weeks after his arrival on the Jays, the Toronto Sun sportswriter Mike Rutsy wrote, “Munenori Kawasaki is not your usual, reserved, slightly aloof Japanese player. Armed with a warm, open and pleasant attitude… Kawasaki has quickly warmed himself to his Blue Jays teammates and staff.” 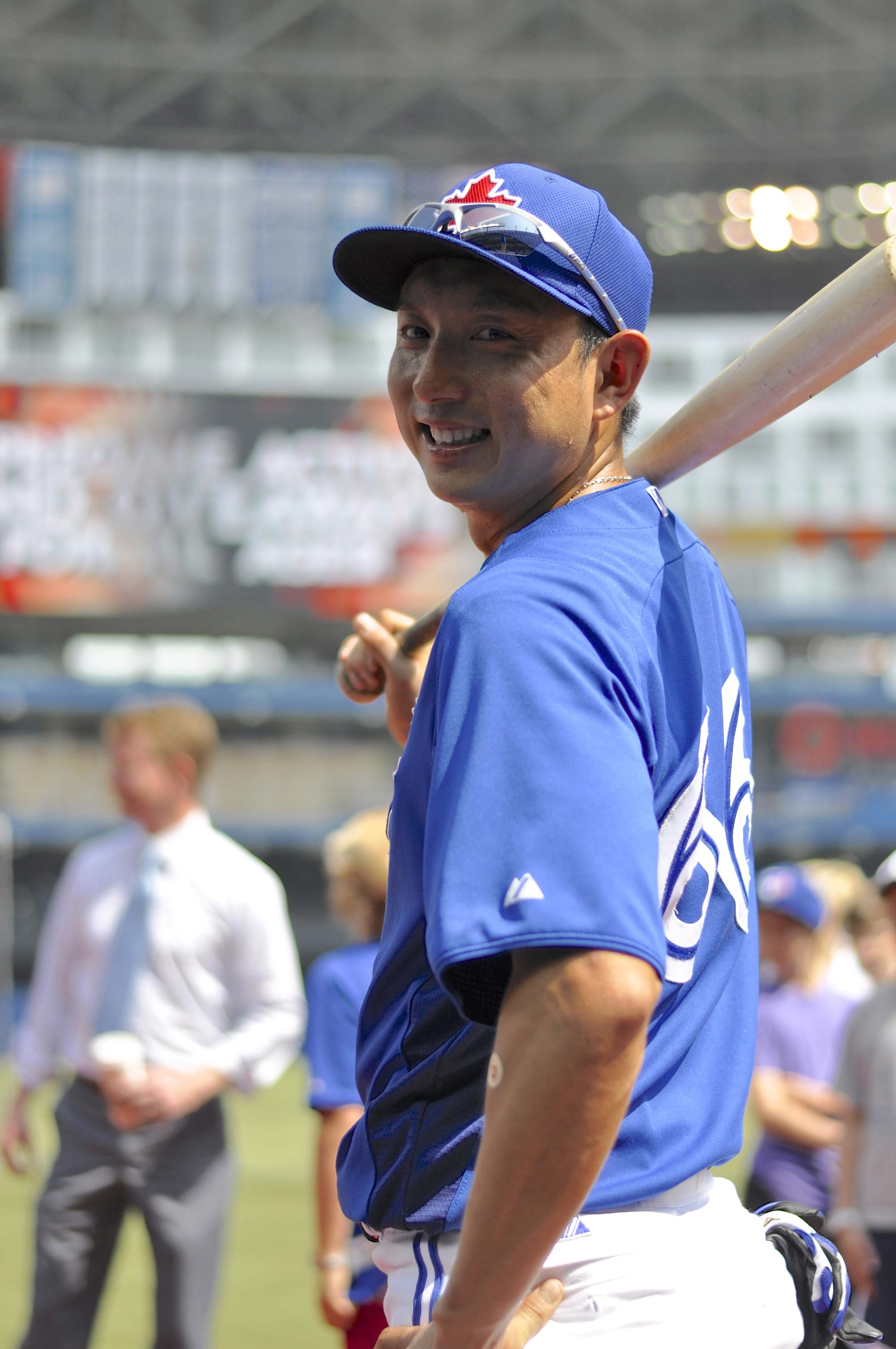 I would add “and also to local sportwriters and the TV and radio commentators.”

Among the different gestures Kawasaki brought to the diamond was while at bat doing a quick down-and-up squat between pitches and occasionally while out in the field, too. And his bowing Japanese style  (taking off his cap, clasping his hands in front and bowing) to congratulate a teammate’s achievement or to accept a compliment.

That Japanese-style bowing of his soon became infectious. One early game when he made an impressive fielding play, the TV camera showed two young women in the stands standing up and bowing back to him. And eventually as he became a fan favourite, another acknowledgement of his play was fans standing up and chanting “Kawa-Saki, Kawa-Saki!”

What also turned on his teammates was Kawasaki’s cheering from the dugout. One teammate was quoted as saying, “He made us a happy family!” And unlike most pro players who remain quite serious, his glowing smiles and happy gestures reflected how much he loved baseball.

So during June when the Jays finally livened up and accomplished an 11-game win streak, the last three players on the team’s batting lineup—Maicer Izturis, Emilio Bonifacio and Kawasaki—were complimented for their contribution, “exceeding their normal production” was how Toronto Star writer Mark Zwolinski put it.

One wholly unexpected win of the 9th game in that streak had been stimulated by the light-hitting Kawasaki’s first-ever major-league home run, It shot right into the rightfield bleachers. And reflecting how the fans felt, the standing ovation kept continuing well after he had circled the bases and gone into the dugout. So a friendly push by a teammate got Kawasaki out again and as you might expect, he acknowledged the applause by doing his bowing in three directions.

What was ironic at that time was that Jose Reyes was expected to return from his rehab within a few days and the local papers had started running stories with such headlines as “Kawasaki Stays if Jays Have a Say” and “Kawasaki Conundrum Puts Blue Jays in Pickle” (both Toronto Star),” plus “Blue Jays Will Be Sad if Kawasaki Goes (National Post).”

Then two days after the 11-win streak ended, Jose Reyes returned to the Jays and despite the earlier media conjectures, Kawasaki was sent down to Buffalo. This left a bad taste in many mouths, including my own.

But the gods above hadn’t totally neglected us.

Our Japanese hero was only gone for two days. Because leftfielder Melky Cabrera got injured and went on the disabled list, Kawasaki was called up to put on his Jays uniform again.

Rajai Davis, the fastest runner on the team and a good fielder as well, took Carbrera’s place. So Kawasaki’s role became to be an occasional backup for shortstop Jose Reyes and also to take over 2nd base.

On July 1, for Canada Day the Jays wore red shirts and blue caps with a red-and-white  maple-leaf logo. They won 8-3 against the Detroit Tigers, with Kawasaki contributing an RBI single in the second inning. A satisfying holiday observance.

Then on July 4, U.S. Independence Day, the Jays took to the field wearing white uniforms and white caps with the team logo above the red peaks. On Kawasaki in particular, the outfit reminded me of the classic Vancouver Asahi uniform. However, our team lost, which meant the Americans took one on their special day.

On Friday, July 5, I interrupted my writing this column to watch the Blue Jays play the Minnesota Twins in the first of a three-game series at Toronto’s Rogers Centre. Well, our team won 4-0 behind Mark Buehrle’s strong pitching. And Munehiro Kawasaki was playing at 2nd base again alongside Jose Reyes at shortstop.

Our hero’s contribution included a smart bunt to advance two runners who both scored when Reyes followed with a double. And Kawasaki’s fielding was faultless—catching two flies in the 6th inning, and then in the 9th inning another fly for the first out and later his neat and tidy scoop of a grounder to get the final out for the Jays victory.

And after each play Munenori-kun shared his happy smile. Just like the fans watching did, as the TV camera showed.

Now what will happen when Melky Cabrera recovers from his injury? Not to worry. After all, when Kawasaki was sent back to the Bisons, Jays manager John Gibbons said “He’ll be back.” And he sure was.

Every month Frank Moritsugu publishes his coloumn Frankly Speaking in the Nikkei Voice. This column was originally published in the July and August Issue of Nikkei Voice.


[…] and is now playing with the Fukuoka SoftBank Hawks of Japan’s Pacific League, but still has a strong bond to Toronto and his […]


[…] is now playing with the Fukuoka SoftBank Hawks of Japan’s Pacific League, but still has a strong bond to Toronto and his […]