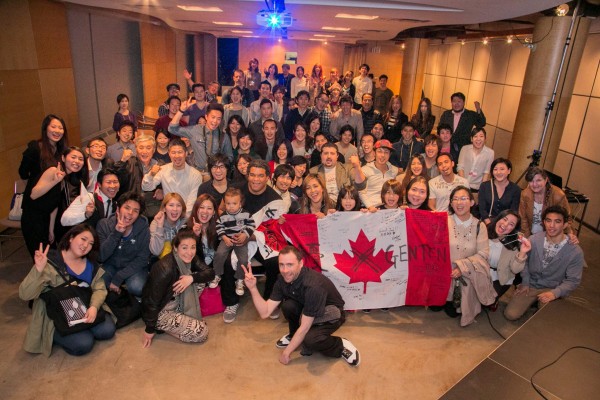 Do you know where your Genten is and how important it is to where you are today?

Talk x GENTEN’s third panel event was held this week at The Japan Foundation in downtown Toronto and featured inspiring stories from athletes Carlos Newton and Miyuu Yamamoto. The technical definition of genten means “starting point” in Japanese and the GENTEN Community Organization in Toronto is a group of working visitors, students and immigrants to Canada who are interested in creating new opportunities for cultural exchange between the two countries.

The event is a new type of speaking event that brings together Canadian and Japanese speakers who live in Toronto, Canada and play an active role in a wide range of social and professional activities .The theme of the inaugural discussion was “keeping the challenging heart” and the organization picked two excellent examples with guest speakers in Canadian martial artist and former UFC welterweight champion Carlos Newton and former world champion Japanese Olympic wrestler Miyuu Yamamoto. With the help of MC and moderator Mark Hashimoto, Newton and Yamamoto told their inspiring stories of athletic success from Genten to where they are today, with a focus on how they have persevered through many obstacles and setbacks along their journey to reach their respective goals.

Carlos Newton’s Genten was coming to Canada when he was a very young boy, and Miyuu Yamamoto’s when she lost her mother at a young age. Both turned challenging times into motivational opportunities and the way they channelled the difficult times in their lives into their mental and physical training in sport is a lesson to all.

It was very inspiring and educational for me, a Canadian, as well as the many patrons in the crowd who are new to Canada. GENTEN is a community created and designed to help people who are new to the country feel comfortable and achieve their goals. 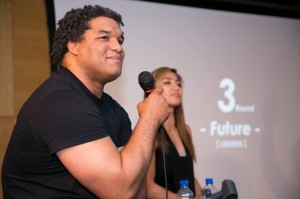 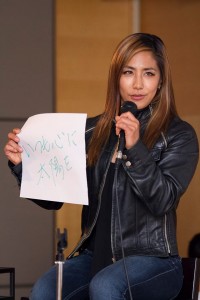 According to spokesman Tomo Nagamoto, the community is not only for Japanese coming to Canada but also for Canadians going over to Japan to meet like people and share in their lessons and experiences.

“It is a community for people to get together and share new opportunities but it is not only for Japanese coming to Canada it is also for Canadians who may wish to go to Japan on exchange. For people who want to go abroad and teach English, or for Japanese who come over here to learn English.” Nagamoto said. “This discussion was athletes and the next one we have is musicians and people in the music industry.” The event also featured a sneak peak performance by one of the feature speakers for the next event, musician Jessica Stuart. Nagamoto says that they are still finalizing all their future guest speakers.

It was a great third event and the room was packed with interested patrons who were also allowed to ask the guests questions in the open question period at the end.

The next event will be held on Wednesday, June 11th and will feature Stuart, as well as the owner of Cosmos Records Aki Abe.