Giant pigeons carry messages of love and gratitude in Toronto 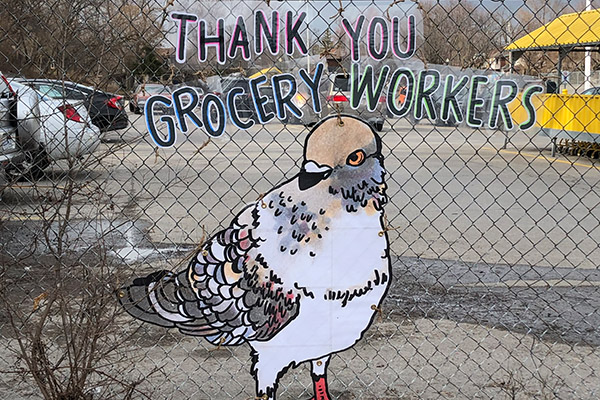 Sisters Emmie and Lisa Tsumura use art to share messages of hope. One of Emmie Tsumura’s giant pigeons outside a No Frills in Toronto, thanking grocery store workers. Photo credit: Emmie Tsumura.

TORONTO — Sisters Emmie and Lisa Tsumura have been using art to share messages of gratitude and love in Toronto and Ajax during the COVID-19 pandemic.

Emmie, an artist working in illustration and graphic design, has been creating giant pigeons and placing them around Toronto. These works of art carry messages of thanks to essential workers, especially those in often thankless jobs, such as grocery store workers, sanitation workers, delivery drivers and migrant farm workers. 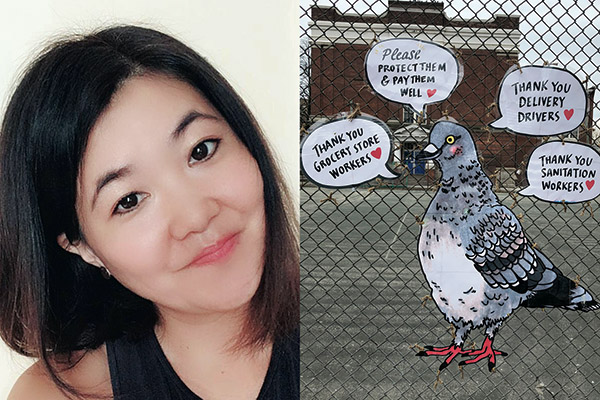 Lisa, a kindergarten teacher in Ajax, created a learning garden accompanied by one of Emmie’s giant pigeons outside her classroom. The garden is a tangible place for her students to visit and know their friends have been there and their teacher recognizes their efforts adapting to online schooling.

“We were both thinking about the different feelings people were having, and that very palpable energy: fear, anxiety, panic,” Emmie tells Nikkei Voice in an interview. “With both of our projects, we wanted to figure out how to communicate and give care to the community, and to think about what kind of feelings are missing from this conversation right now and gratitude was one of them.” 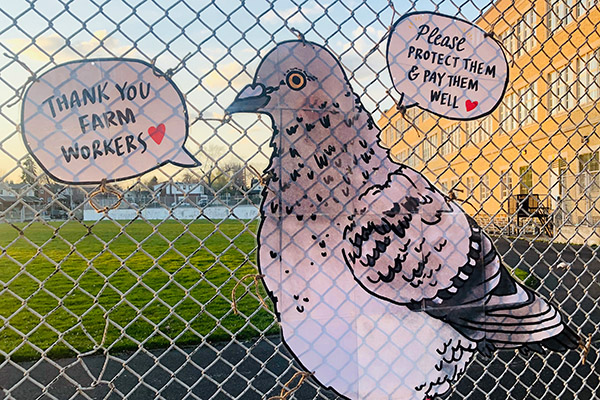 Emmie’s giant works of art start as regular size drawings, which she then scales up and prints on multiple pieces of paper. She cuts out and laminates each piece, taping them together. With a mask and gloves, Emmie goes out and attaches the pigeons to chain link fences around the city. Currently there are five pigeons around the city, and one in Hiroshima, outside Funairi Citizens Hospital, a COVID-19 testing centre.

Emmie was drawing pigeons long before the pandemic. But over the last few months, during walks in Toronto, while socially isolating, the pigeons were always there. She began noticing them more, and appreciating their iridescent colours, with bits of greens, blues, purples and pinks in their feathers. She dug into the history of the birds, adaptable and resilient; they are also symbols of love and peace. Pigeons were also used to send messages throughout history, like during the First and Second World War. But now the birds are seen more as nuisances in the city, says Emmie.

Much of Emmie’s work is socially engaging, and she uses her art as a form of activism, to draw attention to social issues within the city. She designed colouring pages that can be printed from her website for free. She asks for people to donate $10 to Justice for Migrant Workers, a charity that delivers protective equipment to migrant farm workers in Ontario.

“The pigeons for me are sort of a symbol of seeing something that is normally unseen, things that are happening under the surface. There’s a thank you to essential workers, and also those we don’t see, like sanitation workers and migrant farm workers,” says Emmie. 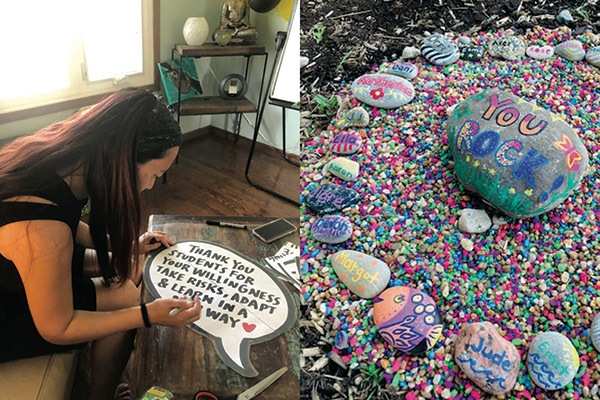 For Lisa, her project was to recognize and give gratitude to her kindergarten students and their parents. Moving to online classes was a challenge, especially because of how quickly the change took place, she says. But her students have been resilient and their parents have been essential in making the transition work. They help their children log into their online classes, make sure they stay focused, and help them with their school work. A parent herself to a fifth grader, Lisa understands firsthand how hard it is for parents to balance working from home and also making sure their children keep up with their schooling. 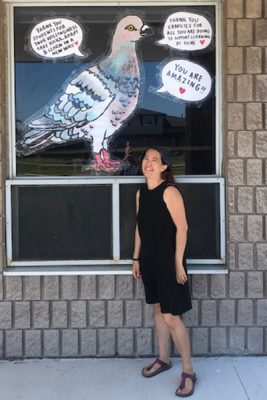 “I have this amazing community of parents that have been so wonderful and supportive, and really without them, in kindergarten, the learning wouldn’t even happen,” she says.

Lisa created a learning garden outside her classroom, with rocks painted with colourful designs and the names of each of her students, arranged in the same order the children sit in the classroom. She decorated it with colourful fishbowl rocks and Emmie created a massive pigeon to install in the classroom window. The garden brought some light to the otherwise empty school.

“I think the schools have been a sad space because you’re used to seeing kids and a lot of life happening, and they’ve just been closed,” says Lisa. “The school’s kind of dark and dreary, but it’s just some kind of light and happy shock to see this giant pigeon in the classroom window.”

After installing the garden, from the parking lot she sent a message to her students that there was a surprise outside the school for them. Immediately, at the house across the street, the door flung opened and one of her kindergarteners excitedly ran out. Since then, parents have been sending her photos of students eagerly coming up to the garden, finding the rock with their name on it, and posing next to the giant pigeon.

Incorporating pigeons into her lesson plan, Lisa used a colouring sheet designed by Emmie, and had her students colour in their own pigeons, and write messages of gratitude. Emmie got to join the online lesson, and see the students hold up all of their own pigeons up to the screen.

“All of this has been pretty overwhelming, because I originally started drawing the pigeons as a personal coping method, then I started moving beyond that in wanting to share. It’s surreal, because I never thought in making these pigeons, that people would like it this much,” says Emmie.

The pandemic has highlighted a lot of issues that already exist in our society, and is now putting a spotlight on them, says Emmie. Like how creative skills and jobs are not as valued or well paid as others. But during the pandemic, art and creative projects have brought people together, whether it is music, visual arts, virtual museum tours, recipes, the list goes on, says Emmie.

“I’ve always known that art is community,  that’s just how my life is,” says Emmie. “But I hope people will remember that when the pandemic is over.” 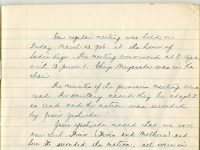