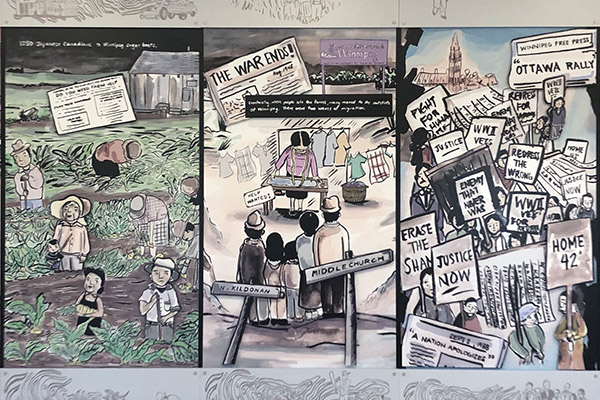 
A close up look at parts of the newly unveiled mural, Japanese in Manitoba, at the Japanese Cultural Association of Manitoba. Photo courtesy: JCAM. 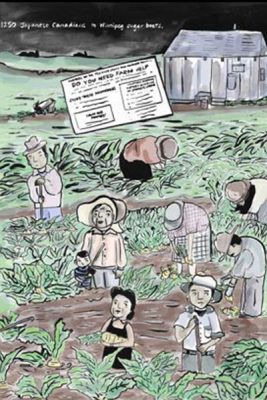 The second panel of Japanese in Manitoba. Photo courtesy: JCAM.

I explained the historical content of the mural, comprised of five large panels, that tell the story of Japanese Canadians in Manitoba, their arrival in 1942 to sugar beet farms, and resettlement in Winnipeg. Each panel, approximately 3.6 feet wide by 8 feet high, represents an important segment of our history in Manitoba: leaving the West Coast, sugar beet farms, relocation from the farms, Redress Rally, and signing of the Redress Agreement, and the revitalized community today.

JCAM Board member Yuhito Adachi provided the Japanese translation. Adachi came from Japan several years ago and mentioned to me that he had expected to see information on the history of our community, especially at a cultural centre for Japanese Canadians. He said that although there are many traditional Japanese dolls and other Japanese artifacts on display, there was nothing that would give a visitor an indication of why and how the Japanese settled in Winnipeg. He thought that visitors, especially newcomers, would appreciate being exposed to the history and settlement of Japanese in Manitoba and Winnipeg.

Yuhito’s comments became the motivation for me to undertake a project to display our past, history, and the community’s development, artistically, and engagingly. We completed a renovation at the centre to open up a multipurpose area with a large wall ideal for a dramatic display. The idea of a large mural came to mind as a way of revealing our past in a visual and colourful exhibit. 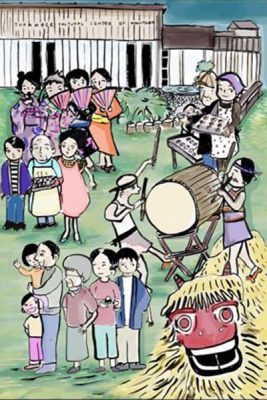 The fifth panel of Japanese in Manitoba. Photo credit: JCAM.

A mural concept was presented to the JCAM board with the understanding that it would be fully funded from outside sources. Approval was received to develop preliminary drawings. Two Japanese Canadian artists were contacted and invited to submit their mural concepts. Cindy Mochizuki, a Vancouver artist, expressed the relevancy of the topic because of the experiences that her family faced during the Second World War. She was the appropriate choice.

I was able to provide documents and photos on the Manitoba experience for her to develop the approach she wanted to take. Fortunately, the Frank H. Hori Charitable Foundation, who had supported several JCAM initiatives in the past, fully funded the project without hesitation.  In January of 2020, Cindy was able to begin the project. She developed a prototype, incorporating manga and graphic novel concepts into her work, an approach that would be well-received by all generations, especially appealing to the young. Ongoing discussions between Cindy and I were necessary to ensure the accuracy of the information.

Although this was Cindy’s first mural, we are thankful and pleased that she was able to proficiently portray our history in a captivating and poignant way. It will be permanently on display for visitors and community members to enjoy and reflect on. In her comments during the unveiling, she explained that she had hand-painted the drawings with black sumi ink and that her work is a fusion of things you might see in a museum and what you might imagine. She has also incorporated a pop-up feature that gives three-dimensional aspects to some key elements. 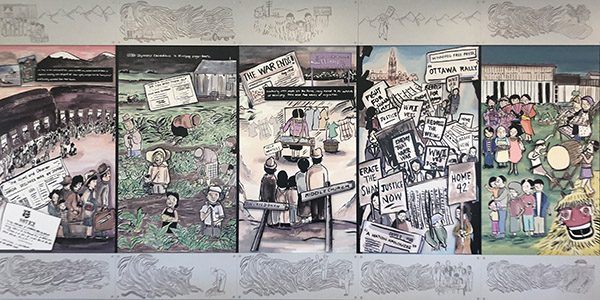 A complete look at the newly unveiled mural by artist Cindy Mochizuki, documenting the history of Japanese Canadians in Manitoba, now at the Japanese Cultural Association of Manitoba. Photo credit: JCAM.

JCAM appreciates the generous support from the Frank H. Hori Charitable Foundation and thanks the trustees, Donna Hori, Stella Chomiak, and Paul Uchikata. Donna expressed pleasure in participating in the unveiling and felt that this mural project fulfilled all aspects of the Foundation’s mandate, which is to preserve Japanese culture, provide opportunities for young people and enrich our society.

A special thanks to Kelly Kaita for digitally capturing the successful launch of the mural unveiling. The video can be viewed below: