The culinary history of horse meat in Japan 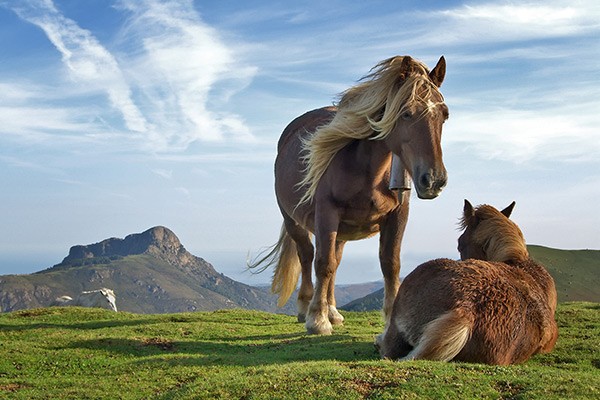 Horses are quickly becoming a hot export for Canadian farmers, but the way they are shipping is sending a chill down the spine of Canadian activists. Photo by: Richard Bartz

There may be a lot of “neigh-sayers” when it comes to eating horse meat, but the culinary history of the dish goes back a long way and further than just Japanese restaurants.

Over the last week, activists in Canada have protested the conditions in which horses are shipped when exported to other countries, specifically to Japan which has seen a large rise in demand for product.

While Japan may be one of the largest importers of horses, they certainly aren’t the only country who has used the meat to create culinary works of art; however, it’s the only country that takes its horse meat raw and might be the source of the current controversy surrounding the livestock.

According to the Asahi Shimbum, sixty per cent of the horse meat imported into Japan comes from Canada with the other 40 per cent coming from Hokkaido.

In recent years, Statics Canada reports that the number of live horses shipped to Japan has nearly tripled in numbers. There’s concern about the conditions in which they are shipped and allegations that the horses are made to stand for more than 36 hours at a time without water.

There are also reports that state after the butchering process, raw horse meat has a shelf life of about three days, which is greatly increasing demand for fresh livestock.

According to the Canadian Horse Defence Coalition, exports and imports of horses to and from Canada is now an industry that exceeds $80 million dollars in sales.

Yo-tu-ba is an association made up of Japanese restaurants that serve horse meat on their menus. According to their website, the tradition dates back to the 16th century when Japanese lord Kiyomosa Kato had to resort to eating his horse when rations ran dry during a battle.

Basashi, which the name of the thin slices of raw horse meat in modern times, is a trend and typically how horse meat in Japan is usually prepared. However, there are other ways to cook the dish.

The tradition has recently seen a revival among diners. It is thought that raw horse meat is a nutritious food and according to the Guardian it is usually free range and thus free from the health concerns associated with breeding animals to maximize their muscle mass.

As well, Yo-tu-ba notes that people once believed that horse meat could be a cure for colds and disease, but today the meat is appreciated more for its culinary aspects.

The Canadian Meat Council names France, Swizerland, Belgium, and Kazakhstan as the other largest markets


“It is thought that raw horse meat is a nutritious food and according to the Guardian it is usually free range and thus free from the health concerns associated with breeding animals to maximize their muscle mass.” That statement couldn’t be more wrong. Horses that are being shipped from Canada in great part, are coming from the U.S. Those horses are backyard pets, racehorses, working animals that have received wormers, and various innoculations for keeping them well and healthy. It would take some time (if ever) that those medications would leave the meat..and are not intended for human consumption. The Japanese might be best advised to not import their horsemeat..if they would like to live long and prosper. Horses should not be consumed.


Absolutely correct! This type of erroneous reporting does a huge disservice to readers.


We must stop abusing horses this way. So wrong on so many levels. Horses are not meat!


Pigs and cows aren’t either but I bet you eat them. #HypocriteMuch?


Perhaps those who eat horsemeat would like to read the studies done by the National Institutes of Health in Washington DC that have found that Aplastic Anemia (AA) is 3X higher in Japan than elsewhere. AA is often fatal. AA is linked to phenylbutazone which is commonly given to horses – it never ever leaves their system and is passed on to the person who eats their meat. Although phenylbutazone is prohibited in the USA in food animals, horses heavily laden with it are routinely shipped to Canadian slaughters such as Bouvry Exports. There is no method to track drugs in horses from the USA.