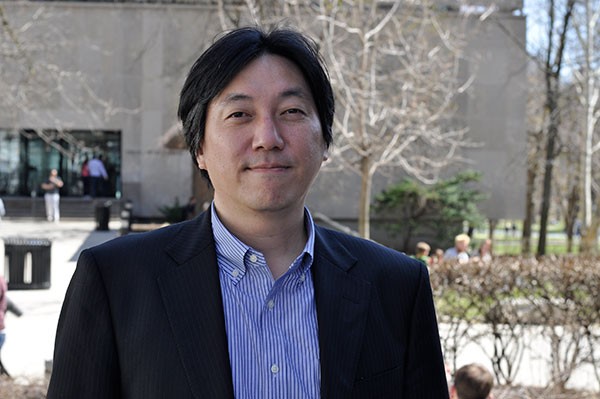 TORONTO – Takahiro Hamano, who has been producing documentaries for over 25 years, was given the Doc Mogul Award at the Hot Docs International Documentary Festival in late April.

Created in 2007, the award recognizes an individual who has made an essential contribution to the creative vitality of the documentary industry. When Hamano heard that he was being presented the award, he was both happy and surprised.

Over his career, Hamano has produced over 30 documentaries with Nihon Housou Kyoukai (NHK) covering a diverse range of issues from exploring the transformative power of ‘Hiroshima’ the first art exhibition devoted to the atomic bomb to the fallout of the Fukushima meltdown in 2011.

He has also attended Hot Docs every year since 2003 and he’s seen a lot of change come to the film genre.

“Nowadays the documentary is expanding internationally and it has changed a lot since the beginning of my career,” Hamano said in an interview with Nikkei Voice.

In 2003, when he first attended Hot Docs he was surprised to see how many documentarians visited the festival; however, he was also disappointed to see how few of them were from Asia.

He sees the festival as a forum to discuss new ideas and to find collaborators for projects. He also sees it as an engaging model for the future of the documentary and how the genre can be brought to younger generations.

He hopes young people will be able to watch documentaries on their smartphones or tablets, but says the change in format will not change how he works.

“The attitude I take to my work won’t change if most people watch them on tablets or smartphones,” Hamano said.

“I see this as a chance to help people enjoy watching these films outside of their house, so I’m going to keep making films to influence change.”

As a producer, he believes the documentary can be used to mobilize watchers to tackle social issues.

Hamano said a defining moment in his career was in 2011 following the 3.11 Earthquake and Tsunami.

At Hot Docs that year, he attended a pitching session where he talked about the disaster and proposed a number of ways it could be covered with an international audience in mind. Many of the participants agreed with him that it needed to be documented and a few agreed to help.

Cooperation, locally and internationally, he says is a cornerstone of the genre’s power to expose social issues. He believes documentaries can change the world and thus choosing new topics can be a challenge. He often struggles with completing projects wanting to ensure they will effectively reach the hearts of audiences.

Hamano has also worked on films like Uzumasa Limelight that followed the fictional tale of real-world actor Seizo Fukumoto. It originally began as a documentary, he says, but through collaboration with script writers, filmmakers, and actors it became something much more.

As for his next project, Hamano is going to be focusing his efforts around producing documentaries to talk about global warming and climate change. He sees this as a serious issue and believes in the next 30 years if something isn’t done the damage could be irreparable.