‘Doglegs’ challenges the perception of the disabled 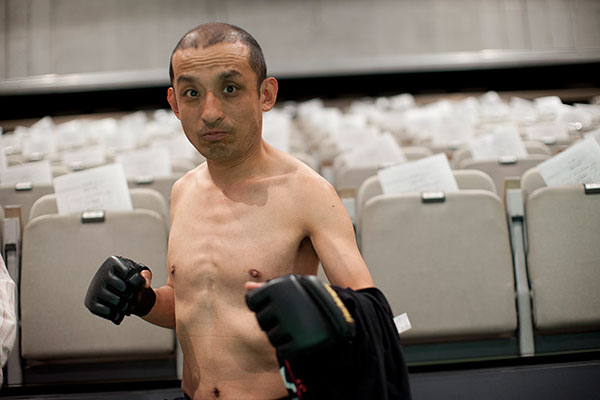 Shintaro, seen here, is one of the co-founders of Doglegs and he’s looking to retire from the ring, but his co-founders won’t make it easy for him. Image courtesy: Heath Cozens

The moment Shintaro starts to bleed, you realize that the fighters aren’t pulling any punches.

He recoils from the hit. His sparring partner, Kitajima, warned him that he was going to hit him in the face and challenged him to hit back.

Doglegs isn’t a professional wrestling league where you hold back, it’s a place where your story carries you forward and your disability is an afterthought.

“It makes people think about the reality of Doglegs and what it means to have a disability,” Heath Cozens, the documentary filmmaker who followed Shintaro’s story, tells Nikkei Voice.

Cozens is a journalist, cinematographer and filmmaker who lived in Japan for almost 18 years and specializes in documenting Japan’s subcultures.

In 2013, he released the documentary From the Shadows that examined child custody after divorce and separation in Japan.

Almost 14 years into his stay in Japan he heard of this professional wrestling league that pitted the disabled and able-bodied in the ring.

In a statement on the documentary’s official website, he states that he felt as if he’d seen it all in, but he was wrong. And when he heard of Doglegs he felt quite wary.

At first blush, he writes, it sounded a bit exploitive, but what he found was something willingly provocative, filled with dark humour, and self-effacing, uncompromising fun.

“It was the interplay between all these contradictory emotions that excited me,” he writes. “As I tried to sort out my feelings, I also began to question my own assumptions about disability.” 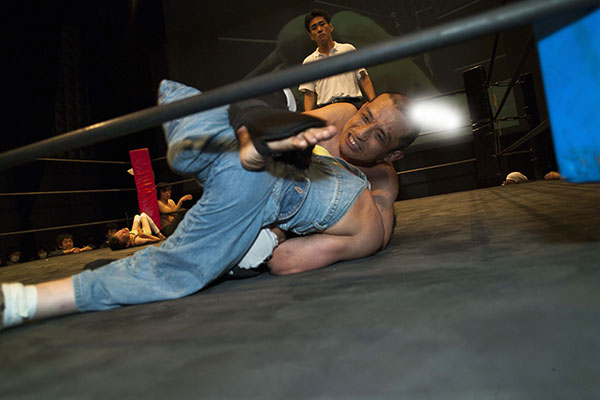 And there isn’t a sport more visceral and more laser focused on body image than professional wrestling.

While we might have images of Wrestlemania, Hulk Hogan, and Andre the Giant in mind, Japanese professional wrestling is quite a different sport.

Focusing more on the endurance of the fighters and crossing the line into mixed martial arts, the matches are heated with punches and jabs really connecting on the other end.

The leagues also have a stronger focus on the stories behind the wrestlers.

For Shintaro and Kitajima, who have been in the league since the beginning, the two are reaching what could be the finale for them.

The documentary follows the pair, along with a number of other subjects, as Shintaro announces his retirement from the fighting life.

It delves into how Japanese society sees the disabled and the support, or sometimes lack of support, they have to draw upon.

Doglegs may be a wrestling league, but for the people who watch the matches and take part it’s so much more.

It’s a community that has built itself upon defeating the misconceptions that plague society.

The film makes you question your own assumptions and can even make you feel a little uncomfortable given how antithetical Kitajima’s treatment of Shintaro seems, especially in their final bout shared in the ring.

“For me, it was that process of questioning that I want to share with people,” Cozen says.

“When you see Doglegs you have all of these feelings, is it bad? Are they acting of their freewill? Why am I even thinking about that?” he says.

“The more questions I asked of myself, the more I started to question my own preconceptions and assumptions,” he says.

Doglegs is a documentary that will, above all, make you question your preconceptions and make you think again.

The disabled athletes aren’t super humans who beat the odds, they’re just humans like the rest of us, and sometimes they bleed.

The feature-length documentary played at the Hot Docs Film Festival in Toronto this year. Kitajima also appeared for the Canadian premiere.