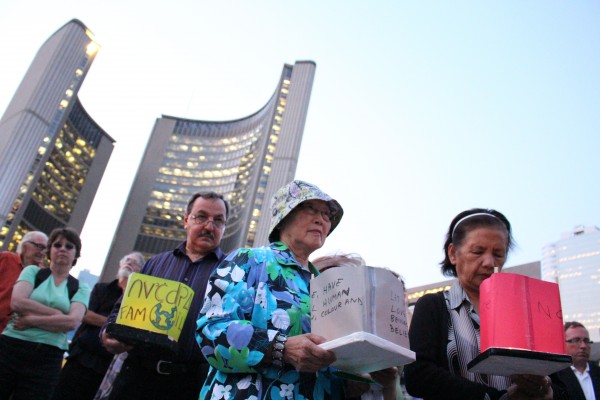 Three of Toronto’s top mayoral candidates attended a ceremony at Nathan Phillips Square on Aug. 6, which commemorated the lives lost by nuclear warfare in Hiroshima and Nagasaki.

Part of the ceremony saw candles lit and set afloat on the water in the square to help bring peace to the victims of the attack, and promoting peace was the topic of discussion with the candidates at the event.

David Soknacki, Karen Stintz and Olivia Chow were in attendance. Mayor Rob Ford and mayoral candidate John Tory were not.

In an interview with Nikkei Voice, Chow said that it’s important to learn from the atrocity that happened in Japan 69 years ago.

“If we don’t learn from history, it’s bound to repeat itself,” she said.

She added that, “It’s important that we do remember the horrors of war both in terms of the Japan invasion of other countries, the 30 million lives that were lost and the senseless destruction of ordinary residents of Hiroshima and Nagasaki.”

Chow was referring to the 36 million that were killed in the Pacific War during World War Two.

“It’s certainly a tragedy, it of course brought the end of the war a little bit closer, but at the [same] time, as a resolve, it must never happen again, and I think that’s why we’re all here,” Soknacki said.

Karen Stintz said that the nuclear bombs that hit Japan is a reflection of a breakdown of dialogue that happened.

“We need to continue the dialogue if we are going to build peace,” she said.

At the commemoration, Olivia Chow said that she wants to help create a peaceful Toronto by implementing a ban handguns.

The weapons are regulated under federal law, but if you have a clear criminal record and pass a safety test called the Canadian Firearms Safety Course, a license is given that allows Torontonian to buy and own a handgun legally.

“Back in the old days, people punched each other or pulled knives, but now there’s shooting, which means there are a lot of innocent bystanders,” Chow said. “So why do we need this in the city?”

“I think it’s just reduce violence, we shouldn’t function through anger and I think it’s important to reduce hatred of every kind and guns are lethal. People should talk about their differences and work it out,” she said.

Some have referred to the idea of a gun ban as “a hollow promise,” pointing to the 70 per cent of guns that police recover, which aren’t registered, but rather are smuggled in from the United States.

David Soknacki said that if he was elected Mayor of Toronto he would make a safer Toronto by, “Making sure we have a prosperous and [high] quality of life.”

“Making sure our less advantaged populations are well served. I think that’s important as well,” he said.

When asked about his proposed cut to the police budget of $65 million annually, he said that it wouldn’t interfere with a safe society.

He wants to change the system that currently pays police officers 28 hours for 24 hours of work.

“It’s not about destabilizing society in fact, it can be done without changing the number of officers,” he said.

Toronto has a total of 5,266 current police officers and two recruiting classes, which combined will add an additional 200 officers to the force by the end of 2014.

“We need to completely look at policing, how we set our expectations for public order and in that, it doesn’t follow that you need more and more police every year.”

He said that it’s not necessary to add more police officers each year and that the assumption that more police means less crime is a fallacy.

“Toronto’s new chief of police will bring a safer community to our city,” Karen Stintz said.

She said that she hopes Toronto’s new chief of police has an understanding of the diversity of Toronto and an appreciation of how communities can co-exist next to each other.

“Toronto has an increase in petty thefts and small crimes that tend to violate people’s safety and security and those need to be addressed,” she said.