“i – Road” from Toyota is the latest in futuristic vehicles 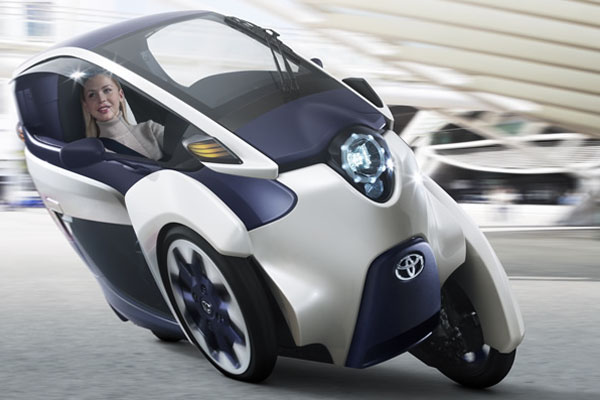 The future is coming to Tokyo’s streets.

The i-Road, a new project from the Toyota Motor Corporation, was unveiled at the Geneva Motor Show last year and just yesterday it went for a test drive on Tokyo’s street, reports the Japan Daily Press.

Consumers were impressed by the new, compact vehicle’s functionality and futuristic form. The miniature car is just 2.345 meters in length, about 1 meter in width with three wheels, one at rear and two in front.

Compared to many other compact cars, it’s small in size making it a convenient choice for downtown commuters. The car is also more manouverable as the driver is able to lean in order to turn giving riders the ability to use narrower streets to avoid daily traffic jams. Take a watch of the video below that shows a demo of the car.

The i-Road has a much different feeling than most other compact vehicles as the driver has to use his or her body to move the car. It’s almost mesmerizing seeing the car turn as the driver inside moves with it.

The i-Road will be tested from March 24 until the middle of June in Tokyo. Toyota will give 20 people a day the chance to test out the vehicle in order to see if it is more convenient than normal cars.

The i-Road will also help Toyota and Tokyo city planners to understand how normal-sized cars contribute to daily traffic on urban roads as well as planning future implementation of this new service.

As technology in compact cars improves, we can expect to see Tokyo’s streets a little less busy and a little more zippy as time goes on.